Jacob Puliyel has submitted that there’s no reason the data from clinical trials needs to be hidden from public view.

A medical worker holds a bottle of AstraZeneca's COVID-19 vaccine at a vaccination centre in Kuala Lumpur, Malaysia May 5, 2021 in this file photo. Photo: Reuters/Lim Huey Teng

Jacob Puliyel, a former member of the National Technical Advisory Group on Immunisation, has filed a public interest litigation (PIL) petition in the Supreme Court seeking segregated data from the clinical trials for the vaccines that are part of the Indian government’s ongoing COVID-19 vaccination drive.

According to the petitioner, represented by advocate Prashant Bhushan, vaccines that haven’t been adequately tested for safety or efficacy have been awarded ‘emergency use’ approvals without the data being disclosed to the people. According to him, this act violates the basic norms of scientific disclosure and the guidelines with respect to disclosure of clinical trial data as laid down by the WHO and followed by the Indian Council of Medical Research (ICMR).

Puliyel has said that not sharing this data compromises our ability to objectively evaluate the vaccines in future.

Data from the clinical trials is important to know if different sections of the population might be more susceptible to adverse events following immunisation (AEFI).

Thus far, data from the trials of Covishield, developed by AstraZeneca-Oxford University and made by Serum Institute, Pune, and Covaxin, made by Bharat Biotech, Hyderabad, aren’t in the public domain.

The Drug Controller General of India (DCGI) approved Covishield on the basis of preliminary results from a bridging trial in India. This trial concluded in March but data from the trial isn’t publicly available.

Covaxin’s phase 3 clinical trial is believed to be underway at various sites around India. Bharat Biotech announced preliminary results in March but only through a press release.

Also read: COVID-19: How to Rescue India From the Ongoing Vaccine Policy Mess

The petition states that it is important for authorities to monitor vaccine recipients and publicly record all adverse events. In other countries, such observations have helped to identify ultra-rare instances of unusual blood clots among some recipients. Based on further analysing these reports, government officials have been able to make informed decisions about continuing or suspending vaccine rollouts.

A woman receives a dose of the COVID-19 vaccine, at a government dispensary in Jaipur, Wednesday, April 7, 2021. Photo: PTI

India was also expected to keep track of and analyse any such reports in a transparent manner. But thanks to poor follow-ups, an opaque AEFI evaluation mechanism and widespread data suppression, public knowledge of these reports is sorely lacking – as is the government’s accountability.

According to Puliyel, the government should actively solicit all AEFIs by notifications in newspapers – upload their details in a public database (like the US’s VAERS).

Currently, the website cowin.gov.in only mentions a certain number of AEFIs, but doesn’t present their details for independent scientific scrutiny.

The petition also cites a letter that a group of public health, ethics, medicine, law and journalism experts wrote to Union health minister Harsh Vardhan, the DCGI V.G. Somani and others, appealing for “time-bound and transparent investigation” into AEFIs in India.

According to their letter, drafted in March 2021, at least 65 people have died after taking a COVID-19 vaccine – but the National AEFI Committee’s findings related to only two deaths had been publicised. Then, a presentation before the National AEFI Committee on March 31 reported that the government was aware of at least 617 severe AEFIs, including 180 deaths. As The Wire Science reported at the time:

According to the slides presented on March 31, prepared by the Immunisation Technical Support Unit at the health ministry and which The Wire Science has seen, the ministry has ascertained the type of AEFI for 492 reports. Of them, 63 people didn’t require hospitalisation, 305 people required hospitalisation and 124 people died. A little more than half of those who died did so due to acute coronary syndrome. And of the 617 overall, at least 180 people (29.2%) died, and of these, complete documents were available only for 35 people (19.4%).

Puliyel, the petitioner, has also prayed that the government not use any coercive mandates to force inadequately tested vaccines on the people. The petition asks that the Supreme Court uphold the rights of individuals to provide informed consent, as the Delhi high court did in Baby Veda Kalaan and Others v. Directorate of Education (2019).

The Delhi government’s directorate of education had directed all schools to comply with guidelines relating to a measles and rubella (MR) vaccination campaign. In this campaign, MR vaccines were to be administered to all children aged nine months to 15 years. The Delhi government had submitted to the high court that the beneficiaries’ parents or guardians wouldn’t have to ‘opt in’ but that they could ‘opt out’.

The high court held that for any parent or guardian to give her consent, she would have to be able to make an informed decision. And an informed decision means knowledge of the vaccine to be administered, its contraindications and side-effects, the date of administration, and the people who’d administer it.

The Delhi government’s initial position was that many children in the specified age group were from economically weaker families, so it would be difficult to get these families’ consent as well as that authorities wouldn’t have good opportunities to counsel them about the importance of vaccination. When the petitioners refuted this claim with the results of some pilot studies, the Delhi government said unvaccinated children could endanger the lives of other children at risk. 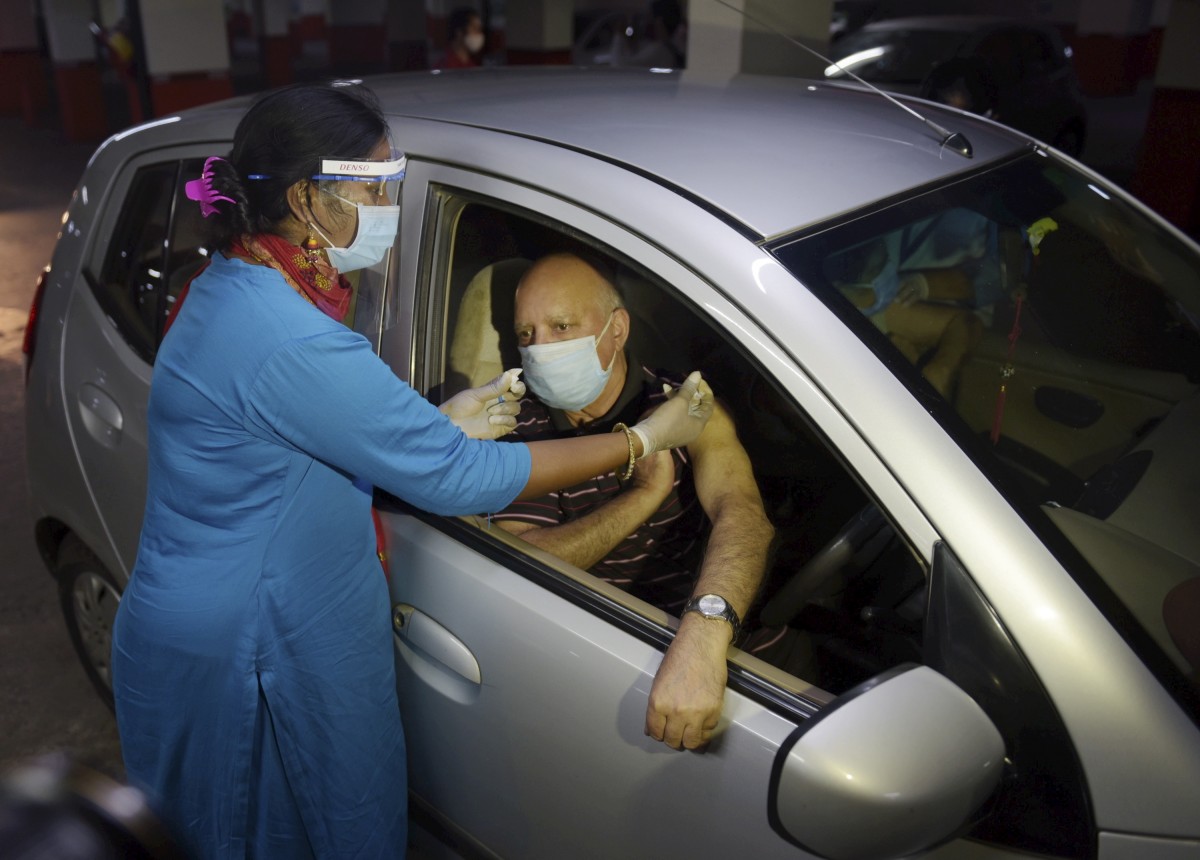 A health worker gives a dose of COVID-19 vaccine to an old man during Drive-In vaccination at DLF City Centre Mall, in Gurugram, Friday, May 14, 2021. Photo: PTI

However, the high court held that the assumption that children could be vaccinated forcibly is unsustainable, and that the government needs to make all efforts to obtain their parents’ consent before vaccination. As a way forward, the court asked that the government distribute consent forms among all eligible students and require their parents or guardians to respond in three working days. The court also rejected the government’s argument that revealing the side-effects and contraindications could discourage parents or guardians from providing their consent.

“The entire object of issuing advertisements is to ensure that necessary information is available to all parents/guardians [so] that they can take an informed decision.  The respondents are not only required to indicate the benefits of the MR vaccine but also indicate the side effects or contraindications,” the high court held.

Also read: As Centre Seeks to Keep COVID Management Out of Judicial Review, SC Is Set to Examine Its Options

The court’s 2019 verdict elevated the Delhi government’s responsibilities to ensure it didn’t undermine the importance of informed consent. Such consent is both legally and medically significant.

However, during the ongoing COVID-19 pandemic, many groups of people, especially in the US, have refused to be vaccinated by contending that they have a right to refuse the shots. Public health experts have countered that a pandemic imposes new duties on people. To quote Swami Subramaniam:

“From an individual’s point of view, it may be ideal if everyone around the individual were vaccinated but she herself did not take the vaccine. Her thinking is that the surrounding herd immunity will protect her, and she will not suffer the potential ill-effects of vaccination. If we all thought like this, no one would get vaccinated, and we would all be collectively and individually worse off. But if we all got vaccinated, we will be collectively better off, most of us will be individually better off and a tiny number may be individually worse off. … Pandemics may call for a temporary shift in moral perspective, favouring the public over the individual.”

In India, however, coercive mandates have assumed more aggressive forms. For example, the Aurangabad Municipal Corporation threatened to allow traders and others older than 45 years to step out of home from May 1 only if they had been vaccinated. For another, in Gujarat, two circulars issued by different authorities made vaccination compulsory for teachers. According to media reports, the authorities came up with this policy to counter vaccine hesitancy.

Perhaps more egregiously, the Gujarat Technological University in Ahmedabad mandated all adult students to be vaccinated if they wished to file their winter 2021 exam forms, according to Indian Express.

The petition stresses that it does not challenge the vaccination programme. Instead, it continues, while our circumstances warrant accelerated approvals for vaccines that haven’t been tested to the extent they might have been if there hadn’t been a pandemic, there is no reason for the trial data to be withheld from public scrutiny. This is also what the WHO and the ICMR guidelines require.

And in these circumstances, forcing people to take vaccines on pain of losing their jobs or access to essential services – both reportedly happening around the country  – would violate the people’s fundamental rights, including their opportunity to provide informed consent.