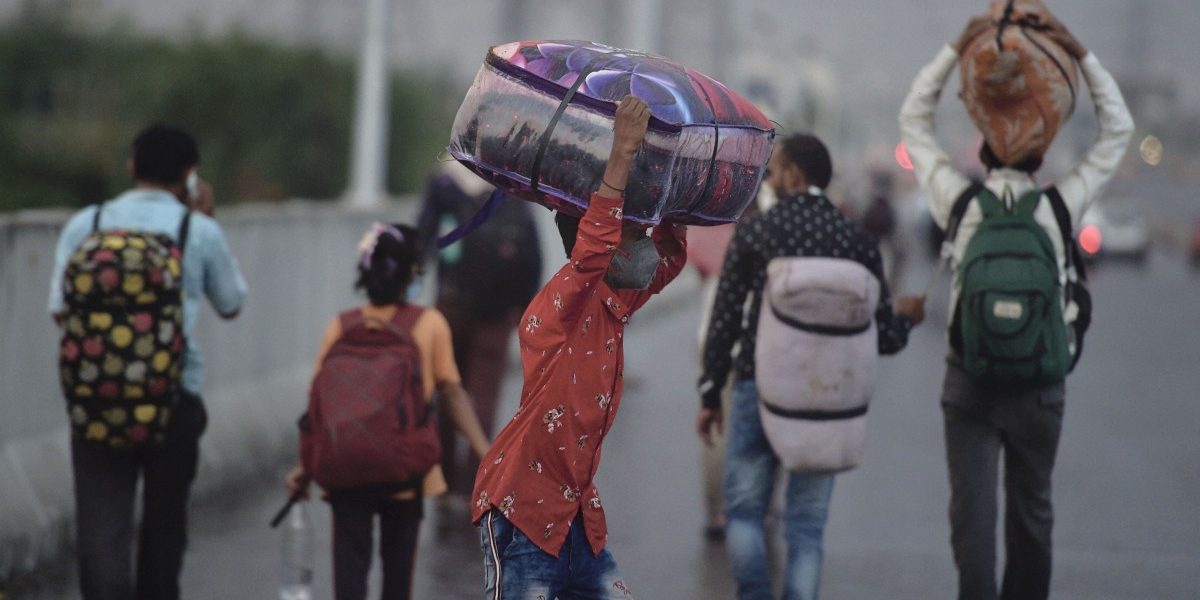 Migrants walk on the Delhi-Noida road during a dust storm on May 14, 2020. Photo: PTI/Vijay Verma

New Delhi: The Supreme Court Thursday directed that no fare for travel either by train or bus be charged from migrant workers, stranded across the country following the COVID-19 lockdown and want to return to their destinations, and said they be provided food and water.

After months of inaction during which it had left the matter to the government, on May 26, the court took suo motu cognisance of migrants’ misery.

The move came more than two months since a countrywide lockdown was announced, that resulted in migrants having to travel out of the cities where they worked in (mostly as daily wage earners) and towards their native villages and towns, on foot.

On Thursday, the apex court, which passed interim directions, said all the migrant workers stranded at various places shall be provided food by concerned states and Union Territories (UTs) at places which shall be publicised and notified to them for the period they are waiting for their turn to board a train or a bus.

A bench headed by Justice Ashok Bhushan said that the originating state shall provide meals and water at the station and during the journey, the Railways would provide the same to the migrant workers. It said that food and water be also provided to them for travel in buses.

Also read: Read: What Senior Lawyers Told the Supreme Court Before it Spoke on Migrants

The bench, also comprising Justices S.K. Kaul and M.R. Shah, directed that states shall oversee the registration of migrant workers and ensure that they are made to board the train or bus at the earliest.

The top court, which heard the matter through video conferencing for around two-and-a-half hours, said that complete information in this regard should be publicised to all concerned.

The court observed that it is presently concerned with the miseries and difficulty faced by the migrants workers who are trying to get to their native places.

It said though there is no doubt that the concerned state governments and UTs are taking steps, several lapses have been noticed in the process of registration, transportation and providing food, water to the migrants.

The bench noted in its order that even after registration for travel, the migrants have to wait for a long time for their turns to come.

The bench noted submissions of Solicitor General Tushar Mehta, who said instructions have been given to state governments to facilitate a bus or vehicle if any migrant workers are seen walking on foot.

Mehta notably also spoke on “elements” who were spreading “misinformation.”

LiveLaw quoted him as having said, “Some isolated, limited instances [of the migrant crisis] are being shown repeatedly. These tend to have a deep impact on the human mind…”

“I have something more to say as an officer of the court. Have a complaint. There are some media reports and some people: two complaints I want to register. There are prophets of doom who keep spreading misinformation. Not showing courtesy to the Nation.”

In addition, he also mentioned “armchair intellectuals” who were ostensibly downplaying the Centre’s efforts.

Also read: The Supreme Court Has Become an Unlikely Detractor of the Free Press

Mehta furthered his onslaught against journalists with a vivid story from photographer Kevin Carter’s experience in shooting a still image of a child and a vulture who was waiting for the child to die in 1983 Sudan.

“… a journalist had asked him, what happened to the child? He said I don’t know, I had to return home. Then the reporter asked him – how many vultures were there? He said one. The reporter said no. There were two. One was holding the camera….’

“All these people wanting to intervene need to apply the vulture and child story,” he said.

Urging the intervenors in the instant issue, Solicitor General called for an insight into their contributions during the migrant crisis.

The bench further directed that migrant workers found walking on the roads should immediately be taken to shelters and provided food and other necessary facilities.

Millions of migrant workers were stranded across the country without food, shelter and transportation after the nationwide lockdown was announced from March 25 at four-hour notice to combat the spread of global pandemic, COVID-19.

They then started walking hundreds of miles to reach their homes, leading to miserable plight.

The apex court said that some interim directions were required to be issued looking at the miseries of the migrant workers.

The bench said it believed that the Centre and state governments were required to be given some time to bring on record the steps taken by them on the issue.

“There are several lapses that we have noticed in the process of registration, transportation and providing food water to the migrants. Even after registration the migrants have to wait for a long time for their turns to come.”

The bench said that details regarding number of migrant workers, plan for transportation, mechanism for registration and other relevant information should be brought on record.

It also said that the Railways has to provide trains as and when state government put in such request.

The bench has posted the matter for further hearing on June 5. In its order, the bench noted that Mehta has placed a report on behalf of the Centre while some states and UTs have also filed their replies.

It noted submissions advanced by Mehta who said that 3,700 trains have been operated from May 1 till May 27 to take migrants back to their destinations.

Mehta told the court that when these migrant reach their destinations, the respective state government takes care of them along with quarantine and necessary screening.

He said all states have set up relief camps where migrant workers are provided food and other necessary facilities.

Mehta also told the bench that all migrant workers do not intend to go back to their native states and some of them are willing to work.

During the hearing, the bench asked some searching questions from the Centre on the plight of migrant workers ranging from as to how long they will have to wait before going to their native places to who will pay for their travel and provide them food and shelter.

The bench asked the solicitor general about the confusion over payment of travel fare of stranded migrant workers and said that they should not made to pay for their journey back home.

“What is the normal time? If a migrant is identified, there must be some certainty that he will be shifted out within one week or ten days at most? What is that time? There had been instances where one state sends migrants but at the border another State says we are not accepting the migrants. We need a policy on this,” the bench told Mehta.