The apex court declared the internet as an important conduit for the facilitation of Freedom of Speech and Expression. 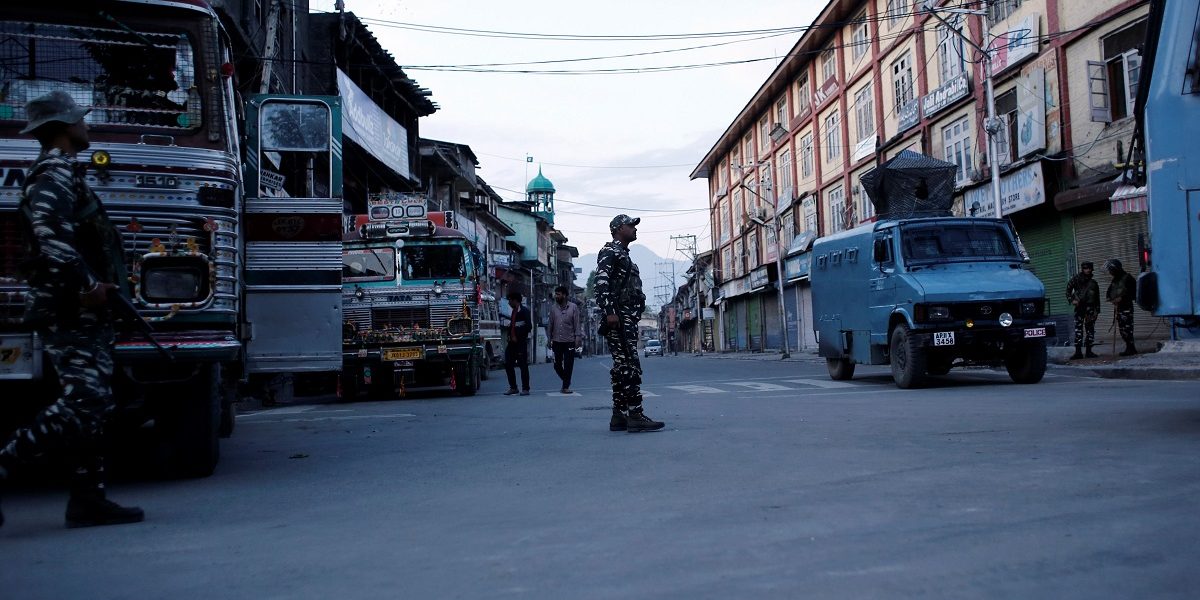 Members of the security forces stand guard on a deserted road during restrictions after scrapping of the special constitutional status for Kashmir by the Indian government, in Srinagar, August 20, 2019. Photo: REUTERS/Adnan Abidi

New Delhi: The Supreme Court on Friday stated that the Internet ban in Jammu and Kashmir without limiting it to a particular duration is not only violation of the telecom rules, but also of the freedom of speech and expression granted by the Constitution.

The three-judge bench comprising justices N.V. Ramana, R. Subhash Reddy and B.R. Gavai, after hearing a clasp of petitions challenging the constitutionality of the Centre’s decision to lockdown Jammu and Kashmir following reading down of Article 370 since August last year, pointed out that freedom of speech and expression includes the right to recieve and disseminate information.

The apex court asked the J&K administration to review all restrictive orders imposed within a week.

The Internet has been suspended for more than 150 days in Kashmir, making it the longest blackout in any democracy.

The court asked the administration to publish every order of restriction under Section 144 of the Code of Criminal Procedure (CrPC) to enable those affected by them to challenge it. The bench added that any order passed will be subject to judicial review.

On the issue of Section 144 CrPC orders :
J Ramana reading out #KashmirLockdown judgment
There needs to be an emergency for the invocation. Mere expression of disagreement cannot be a ground. : J Ramana on #KashmirLockdown

The court also observed that trade and commerce are dependent on the internet, and the freedom to practice such trade is constitutionally protected under Article 19(1)(g).

SC: Certain trade and commerce are completely dependent on Internet. Such trade and freedom to practice then is constitutionally protected as a fundamental right under Article 19(1)(g) #jammukashmir

The bench said the government should follow the principles of proportionality to adopt less restrictive measures.

Justice Ramana began delivering the judgment by saying that the court has not “delved into the political intent behind the prohibitory orders”.

“Our limited concern is to find a balance regarding security and liberty of people. We only here to ensure citizens are provided their rights. We will not delve into the political intent behind the orders given,” Justice Ramana said, according to LiveLaw.

“Kashmir has seen a lot of violence. We will try our best to balance the human rights and freedoms with the issue of security”, he added.

Petitioners had argued the restrictions were unconstitutional

The bench had reserved its judgment on a bunch of petitions challenging the constitutionality of the lockdown in Kashmir on November 27. Petitions had been filed by Anuradha Bhasin, the executive editor of Kashmir Times, Congress leader Ghulam Nabi Azad and some others. The petitioners argued that the restrictions imposed by the government failed to satisfy the tests of reasonableness and proportionality, which were laid down by the apex court in the Puttaswamy case.

They argued that the restrictions had paralysed the lives of 7 million people and that sectors like education, medical care, business, agriculture and tourism have been hit by the lockdown.

While advocates Vrinda Grover, Kapil Sibal, Dushyant Dave and Huzefa Ahmadi had argued on behalf of the petitioners, the Centre and J&K administration’s defence was carried out by the attorney general and solicitor general respectively.

The Centre and the J&K administration responded by submitting that the restrictions were necessary and in the interest of national security. They justified the internet ban as a necessary action to cut off coordination amongst militants. Terming these moves as preventive steps, they said the restrictions had resulted in the ‘historic’ decision being implemented ‘without bloodshed’.

In December, hearing a bunch of petitions challenging the ban on the internet by the Assam government in response to public protests against the Citizenship (Amendment) Act, the Gauhati high court ordered the suspension to be lifted. It said the government had failed to show any evidence to satisfy the court that there were “disruptions on the life of the citizens of the state with incidence of violence and deteriorating law and order situation which would not permit relaxation of mobile internet services.”

SC judgment on Kashmir internet shutdown by The Wire on Scribd

The J&K People’s Democratic Party (PDP), whose leader Mehbooba Mufti has been in detention since August, tweeted saying the judgment “reinstates our faith in the judiciary”.

Finally #SupremeCourt has woken up to the injustices cast upon the people of J&K, calling such govt. lodged curbs an “abuse” of power reinstates our faith in the judiciary. @ndtv @CNNnews18 @TimesNow #KashmirShutdown @ptinewscom https://t.co/YYACRjaVzT

Online civil liberties activists and lawyer Mishi Choudhary issued a statement praising the Supreme Court’s order to end the internet shutdown. She said the “dubious practice” of using Section 144 to shut the Internet down had “become a norm in the past few years”, resulting in India becoming the shutdown capital of the world.

“Although the order grants no immediate relief to the people of Kashmir who have been without internet for the past 159 days but review under Telecom Suspension Rules has been ordered. Let’s hope this is the end of this repressive practice unworthy of a democracy with ambitions of a digital superpower,” she said.

Choudhary praised the apex court for recognising, like the Kerala high court did, the right to freedom of speech and expression through the internet to be part of Article 19(1)(a). “Hopefully, from now on authorities will follow their own rules and not circumvent procedures to curb legitimate expression,” the statement adds.

Apar Gupta of the Internet Freedom Foundation noted in a series of tweets that the principal direction given by the Supreme Court is for an administrative review of the internet shutdown in Jammu and Kashmir with a week. “This almost seems that the primary function of judicial review has been avoided by the Supreme Court, which may have only laid down broad principles” on the impermissibility of an indefinite internet shutdown.

Reacting to the judgement, petitioner Anuradha Bhasin told The Wire, “I have not yet gone through the judgment word by word but from the gist of it I welcome it. I can see three significant points in the judgment. One, it has said that internet is a fundamental right and inviolable. Two, that the government can’t arbitrarily deny it for a prolonged period. Three, the government has to bring to public domain the reasons clearly why it took such a decision. This has a long term consequence.”

She, however, added that the judgment doesn’t bring immediate relief to the people of Jammu and Kashmir. “While it said that internet is part of fundamental rights but already it has already been five months. We can’t wish it away under what restrictions the media in Jammu and Kashmir have been working in these months. It is not merely about media rights and our privileges but it is also about media bringing to public domain the voices of people, the marginalised. So that way, it has impacted every person in Jammu and Kashmir.”

She said, “The ball is now in the government’s court and we hope that it would act on the lines of the spirit of the judgment.”