From the Supreme Court, a Reminder that Justice Was Sacrificed to Save a Judge

The reinstatement of the woman whose sexual harassment complaint against former CJI Ranjan Gogoi was dismissed as false suggests her sacking was wrong and likely mala fide. On whose instructions did the men who fired her act?

It was a small news item – one that most people would have failed to grasp the significance of. ‘SC reinstates woman employee who levelled charges at ex-CJI’, the Indian Express reported on Wednesday morning.

In a country with hundreds of newspapers and TV channels and websites, this news had been reported 20 hours later by just nine English media outlets and two Hindi ones. And if someone had not followed the case when The Wire first broke the story last year along with its reporting partners Caravan magazine and Scroll, they’d be hard-pressed to understand what this latest development tells us about the state of the Indian judiciary.

So, let’s rewind this story to the beginning.

A young woman who had once worked as a junior court assistant with Justice Ranjan Gogoi in the Supreme Court and then in his residential office in 2018 found herself transferred thrice in three weeks after she rebuffed what she claimed were physical advances on the part of the judge.

These transfers were immediately followed by a show-cause notice on some trivial work-related matters. Before she could even answer the minor charges levelled against her, an administrative panel in the Supreme Court found against her and recommended her immediate dismissal. That was in December 2018.

Apart from her sacking, the young woman had to suffer further tribulations. The details are truly hair-raising. Her husband, who was a constable in the Delhi Police suddenly found himself suspended. His brother – i.e. the former junior court assistant’s brother-in-law – who was also a police constable, got suspended too. Then her second brother-in-law – who is disabled and whom Justice Gogoi had got the Supreme Court to hire – found his employment terminated.

As if all this were not harrowing enough, the woman and her husband were arrested by the Delhi police and charged with bribery and extortion on the basis of a complaint by someone who claimed he had paid her Rs 50,000 via a go-between to secure a job at the Supreme Court.

Driven to the wall by this evident vindictiveness, she decided to go public with her allegation of sexual harassment against Justice Ranjan Gogoi.

Last April, she prepared an affidavit detailing her work history, an account of Justice Gogoi’s dealings with her, a narration of the incident at his residence when she alleged he had behaved inappropriately with her, and then the dreadful consequences which followed. The only problem was that the judge in question –  Justice Ranjan Gogoi – was now Chief Justice of India Ranjan Gogoi. 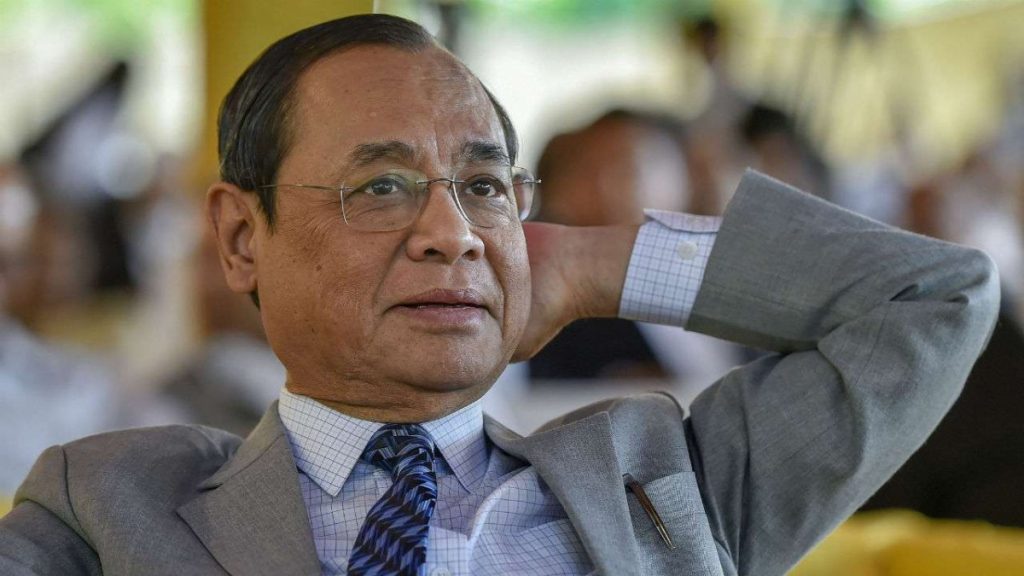 In the hope of fair play, she sent a copy of her affidavit to all the judges on the Supreme Court, and subsequently shared the same with The Wire, Caravan and Scroll.

Reporters from these three publications spoke to many of the dramatis personae named in the affidavit and also sought Justice Gogoi’s response to her charges prior to publication. Justice Gogoi authorised the registrar of the Supreme Court to reply and he did, by not just denying the charges but also by assailing the character of the young woman and alleging that her family had “criminal antecedents”.

Most people thought this story was already pretty horrific, but what followed the publication of our story was even worse.

Chief Justice Gogoi convened a special bench of the Supreme Court headed by himself – breaking a key canon of natural justice that no man can be a judge in his own case. Notice was issued that a bench was convening on a Saturday comprising CJI Gogoi, Justice Arun Mishra and Justice Sanjiv Khanna, “to deal with a matter of great public importance touching upon the independence of the judiciary.”

This rather pompously worded notice cleverly sought to convert a young, powerless woman’s complaint of sexual harassment and vindictiveness against one of India’s most powerful men into a matter “touching upon the independence of the judiciary”.

At the end of the hearing – during which Justice Gogoi attacked the woman who had complained against him by saying she had a criminal record – the bench passed a peculiar order advising the media which had reported her allegations to “take off such material which is undesirable”. Curiously, Justice Gogoi, who had no business presiding over the bench which was dealing with an allegation against himself, committed another departure from the Supreme Court’s traditions by not signing the order to which he was clearly a party as a member of the bench.

In a subsequent hearing by another bench, an adventurist lawyer’s convenient petition alleging a conspiracy by unnamed “fixers” was linked to the woman’s complaint and an inquiry ordered into this irrelevant issue. In the face of growing public disbelief at his handling of the allegation, Justice Gogoi subsequently asked Justice S.A. Bobde, then the second senior-most judge, to set up an in-house panel to probe the former employee’s allegations. Justice Bobde, who is now chief justice of India, inducted Justices Indu Malhotra and Indira Banerjee to serve on the panel alongside himself.

The former court employee testified before the panel but also raised objections to the manner in which it was functioning. These objections were not addressed, compelling her to withdraw from the proceedings. But the panel was not deterred; it declared that it would deliver its findings ex parte if needed, i.e. even without her presence and cooperation. At least one sitting judge of the Supreme Court, Justice D.Y. Chandrachud, pleaded with the panel to not to do so and instead address her concerns but he was disregarded. Attorney general K.K. Venugopal’s suggestion that the panel must include an external member was also brushed aside. The panel then went ahead and concluded that it found “no substance” in the woman’s allegations.

The panel’s findings were not made public, nor was a copy shared or even shown to the complainant – as natural justice principles would demand.

And there the matter seemed to end, with the judiciary, and of course, the Modi government and the ruling BJP, keen to put a lid on the scandal and quickly move on. Big media, which had been forced by Justice Gogoi’s theatrics to cover the story, quickly dropped the matter.

However, it was obvious that the Supreme Court panel’s finding left many questions unanswered. Why was the woman frequently transferred and then dismissed on trivial grounds? Surely there was something unusual about this, and the panel could easily have summoned data from the court’s administrative side – that reporters have been unable to obtain through RTI – to ask a simple question: Prior to the woman’s dismissal, had any employee of the Supreme Court ever been terminated in this fashion for the minor administrative infractions she allegedly committed? The answer to that question would have given the in-house panel a clue that something odd had clearly happened in her case. And what about the coincidental suspension from the police department of her husband and brother in law? And the sacking of her second brother in law? And the bizarre criminal case filed against her for extortion?

If her allegations indeed lacked substance, was it just a coincidence that all these terrible things happened in rapid succession to her? It is not uncommon for a whistleblower to be subjected to a vendetta. But she had not blown the whistle at the time. If she was victimised nonetheless, could it have been because she had rebuffed the advances of someone powerful? That too is not uncommon.

We don’t know if the Supreme Court’s in-house panel of three judges asked these questions then but surely they need to ask them now. Because eight months after they essentially concluded the former junior court assistant had lied we now know that

We know that in between, the woman filed an appeal for her reinstatement but then withdrew it abruptly – allegedly at the behest of a “top government functionary” who promised her and husband that everything would be sorted out.

Today, if the court has taken her back, this is clear acknowledgement that her original termination was wrong and likely malafide. So the obvious question to ask is: On whose instructions did the men who signed her sacking order act?

Second, if the Delhi Police has been forced to acknowledge they have no proof in the criminal case against her, why did they make haste to register a case on the basis of patently flimsy evidence, arrest her, handcuff her and keep opposing her bail? Were they acting on someone’s instructions?

Third, who is this “top government functionary” who allegedly intervened to get the complainant to back down from the pursuit of a legal remedy for reinstatement last July?

Breaching wall between judiciary and executive

These are not theoretical or idle questions. At that strange hearing which he presided over on April 20, 2019, Justice Gogoi had claimed the woman’s allegations were an attempt to attack the independence of the judiciary. The Delhi Police reports to the Union home ministry. And its willingness to be party to the vindictive pressure the woman and her family were subjected to suggests the wall between the judiciary and the executive – one of the guarantees of judicial independence – was breached with some degree of collusion by both sides. Once breached, of course, could the “top government functionary” who got the fatigued and demoralised complainant to back down have resisted the temptation to widen that breach to the government’s advantage? Finally, what does that breach imply about the soundness of the judgments Justice Gogoi delivered as CJI – both before the woman went public with her charge in April 2019 and also after?

Also Read: Why Is Nobody Allowed to Question the Inquiry Into Allegations Against CJI Gogoi?

The judges who were part of the in-house panel which concluded that the young woman’s allegations against Justice Gogoi “lacked substance” owe it to their collective and individual consciences – and to the reputation of the Supreme Court of India – to raise these questions anew, provide answers to the people and reassure us that there is no need to worry about the independence of the judiciary.

Finally, it is obvious now that the Supreme Court – whose intervention years ago in the Vishakha case led to the eventual creation of laws against sexual harassment at the workplace – needs to get its own house in order. It must be willing to subject itself to the same sort of complaints procedure that every formal workplace in India is required by statute to keep in place. This means the creation of an internal complaints committee – with one or more external members – which can examine any allegation of sexual harassment against a judge or even the CJI, should such a complaint ever arise.

The ‘internal panel’ mechanism has little credibility after the way it handled the charge against Justice Gogoi last year. And the latest development in the harrowing case of the junior court assistant is surely the final nail in its coffin.