A day ago the Supreme Court upheld a 10% reservation for economically weaker sections among the ‘upper’ castes. In his 100-page dissent, Justice Ravindra Bhat, very clearly noted that the judgment is exclusionary. 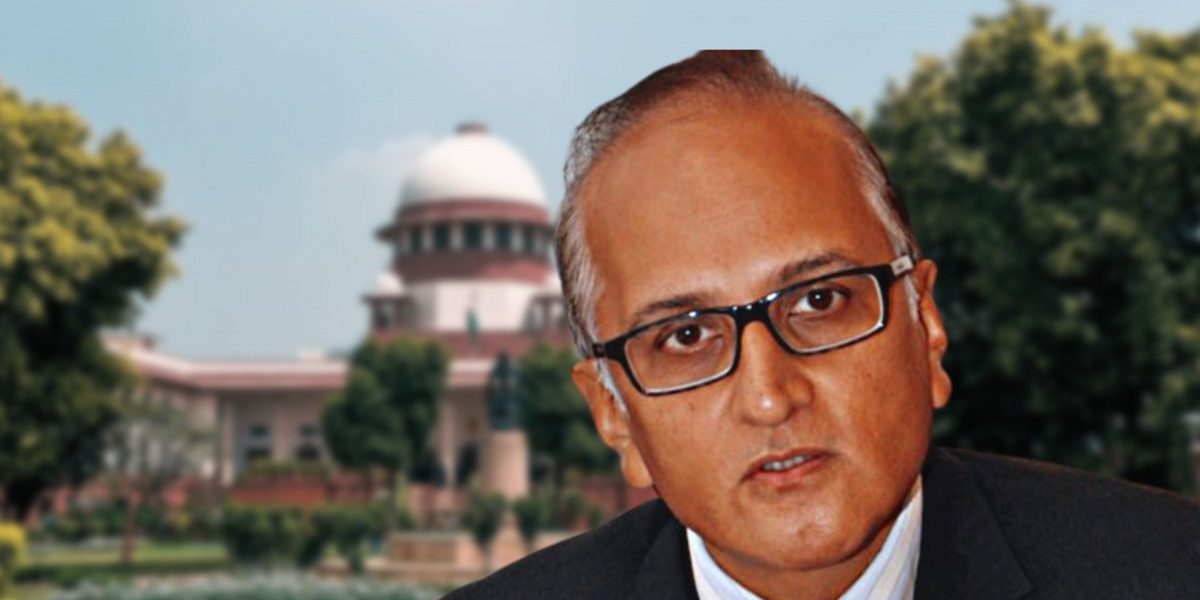 Justice Ravindra Bhat. In the background is the Supreme Court. Photos: File and LiveLaw

News that the Supreme Court has upheld the 103rd Constitution Amendment Act which granted 10% reservation to the economically weaker sections among the ‘upper’ castes has evoked dismay from anti-caste activists, social commentators and opposition parties, and jubilation from supporters of the government.

One of the most repeated talking points has been the fact that the five-judge bench’s decision was a 3:2 one – three judges were in favour of upholding the quota while two were not.

Justice Bhat’s dissenting opinion laid bare in no uncertain terms the message of a quota which absolutely did not recognise Scheduled Castes and Scheduled Tribes, or the Other Backward Classes. Justice Bhat examines the equality code of the constitution and how – while intrinsic to the basic structure of the constitution – a reservation for equality cannot mean the economic advancement of the same group.

Justice Bhat, very clearly, notes that the judgment is exclusionary.

The following are a few notable parts from his nearly 100-page opinion.

“I regret my inability to concur with the views expressed by the majority opinion on the validity of the 103rd Amendment on Question No. 3, since I feel – for reasons set out elaborately in the following opinion – that this court has for the first time, in the seven decades of the republic, sanctioned an avowedly exclusionary and discriminatory principle.

“Our Constitution does not speak the language of exclusion.

“In my considered opinion, the amendment, by the language of exclusion, undermines the fabric of social justice, and thereby, the basic structure.”

On what exactly needs further scrutiny

“As long as the State addresses deprivation resulting from discriminatory social practices which have kept the largest number of our populace in the margins, and continues its ameliorative policies and laws, the introduction of such deprivation based affirmative action, is consistent with constitutional goals.

“What, however, needs further scrutiny, (which this opinion proposes to address presently) is whether the manner of implementing – i.e., the implicit exclusion of those covered under Art. 15(4) and 16(4) [Scheduled Castes, Scheduled Tribes, and socially and educationally backward classes]…] violates, or damages the basic structure or essential features of the Constitution.

Analysing the ‘other than’ clause

“Clearly there is no dispute, in the manner that the phrase “other than” appearing in Articles 15(6) and 16(6), is to be read – either on the side of the petitioners, or the respondents. That exclusion is implicit, is agreed upon – the point of divergence is only on whether such an exclusion is permissible or not.”

“The anxiety of the Constitution framers in outlawing untouchability in all forms (without any reference to religion or community), resulted in its express manifestation as Article 17, wherein the expression “untouchability” was left undefined…”

“The Assembly bestowed its attention to the minutiae of what constitutes untouchability, whether its forms of practice in the Hindu religion alone qualified for prohibition, or also inter-communally, etc. Dr. Ambedkar, K.M. Munshi, Sardar Patel, and B.N. Rau participated in all these deliberations. Shiva Rao observes that the Committee came to the general conclusion that “the purpose of the clause was to abolish untouchability in all its forms – whether it was untouchability within a community or between various communities.”

“…[I]t is my considered opinion, that due weightage was not given to Article 17, which as argued by some of the petitioners, is also a part of the Equality Code…”

“The idea of the twin assurance of non-discrimination and equality of opportunity, is to oblige the state to ensure that meaningful equality is given to all. Similarly, the fraternal principle binds both the state and the citizen, as without fraternity, liberty degenerates to individualistic indulgence. Without dignity, equality and liberty, are rendered hollow.

“This inviolable bond, therefore, is part of the core foundation of our republic. Freedom from colonial rule was with the agenda of creating a democratic republic, reflecting the unique genesis of its nation, holding the people with diverse languages, cultures, religions with a common bond of egalitarianism, fraternity, and liberties, assuring dignity to all – the State and the citizens were to ensure that these were preserved, at all times, for each individual.”

Efforts of the state to curb exclusion

“This principle of equality – non-discrimination or non-exclusion, never had occasion to be considered in past decisions that examined amendments to the Constitution which dealt with different facets of equality…Thus the court did not adjudicate upon the non-discriminatory or non-exclusionary principle. In each case, the facet of equality alleged to have been violated by a constitutional amendment, limited or affected property…”

“The effort of the State in each of these instances, was to create new avenues by expropriation of wealth, assets, and properties from the “haves” and ensure distributive justice in furtherance of the objectives under Article 38 [particularly clause (2); and also Article 39 (particularly clause (b)] – that of minimising inequalities, and distribution of ownership and control of material resources, respectively.

“Thus, 263 entries out of the total of 284 entries in the IXth Schedule of the Constitution, are legislations relating to land reforms, land ceilings, and other agrarian reforms acts, of the States and Union Territories.”

“…[F]or the first time, the constituent power has been invoked to practice exclusion of victims of social injustice, who are also amongst the poorest in this country, which stands in stark contradiction of the principle of egalitarianism and social justice for all.

“The earlier amendments were aimed at ensuring egalitarianism and social justice in an inherently unequal society, where the largest mass of people were impoverished, denied access to education, and other basic needs.”

Non-discrimination is part of basic structure

“…[T]he irresistible conclusion is that non-discrimination – especially the importance of the injunction not to exclude or discriminate against SC/ST communities [by reason of the express provisions in Articles 17 and 15] constitutes the essence of equality: that principle is the core value that transcends the provisions themselves; this can be said to be part of the basic structure.”

“Can the fact that SC/ST and OBC communities are covered by reservations to promote their equality, to ensure that centuries old disadvantages and barriers faced by them (which are still in place, and is necessary to ensure their equal participation) be a ground for a reasonable classification? In my opinion, that cannot be the basis of classification.

“None of the materials placed on the record contain any suggestion that the SC/ST/OBC categories should be excluded from the poverty or economic criteria-based reservation, on the justification that existing reservation policies have yielded such significant results, that a majority of them have risen above the circumstances which resulted in, or exacerbate, their marginalization and poverty.

“There is nothing to suggest, how, keeping out those who qualify for the benefit of this economic-criteria reservation, but belong to this large segment constituting 82% of the country’s population (SC, ST and OBC together), will advance the object of economically weaker sections of society.”

Among the poorest are STs

“As an aside, it may also be noted that according to the figures available, 45 districts are fully declared, and 64, partially declared, as Fifth Schedule areas, out of 766 districts in the country.

“Majority of the population of these areas are inhabited by members of scheduled tribes.

“According to the Sinho Committee, 48.4% of all Scheduled Tribes are in the BPL (below poverty line) zone. This is 4.25 crores of the population. In this manner, the exclusion operates additionally, in a geographical manner, too, denying the poorest tribals, living in these areas, the benefit of reservation meant for the poor.”

“The exclusionary clause (in the impugned amendment) that keeps out from the benefits of economic reservation, backward classes and SC/STs…strikes a death knell to the equality and fraternal principle which permeates the equality code and non-discrimination principle.”

“Reservation is designed as a powerful tool to enable equal access and equal opportunity. Introducing the economic basis for reservation – as a new criterion, is permissible. Yet, the “othering” of socially and educationally disadvantaged classes – including SCs/ STs/ OBCs by excluding them from this new reservation on the ground that they enjoy pre-existing benefits, is to heap fresh injustice based on past disability.

“The exclusionary clause operates in an utterly arbitrary manner.

“Firstly it “others” those subjected to socially questionable, and outlawed practices – though they are amongst the poorest sections of society.

“Secondly, for the purpose of the new reservations, the exclusion operates against the socially disadvantaged classes and castes, absolutely, by confining them within their allocated reservation quotas (15% for SCs, 7.5% for STs, etc.).

“Thirdly, it denies the chance of mobility from the reserved quota (based on past discrimination) to a reservation benefit based only on economic deprivation.

“The net effect of the entire exclusionary principle is Orwellian, (so to say) which is that all the poorest are entitled to be considered, regardless of their caste or class, yet only those who belong to forward classes or castes, would be considered, and those from socially disadvantaged classes for SC/STs would be ineligible.”

Exclusion not based on deprivation but identity

“Within the narrative of the classification jurisprudence, the differentia (or marker) distinguishing one person from another is deprivation alone. The exclusion, however, is not based on deprivation but social origin or identity. This strikes at the essence of the non-discriminatory rule.”