The Jamiat had sought directions to the Uttar Pradesh government and other states to ensure that no further demolition of properties of alleged accused in recent protests be carried out. 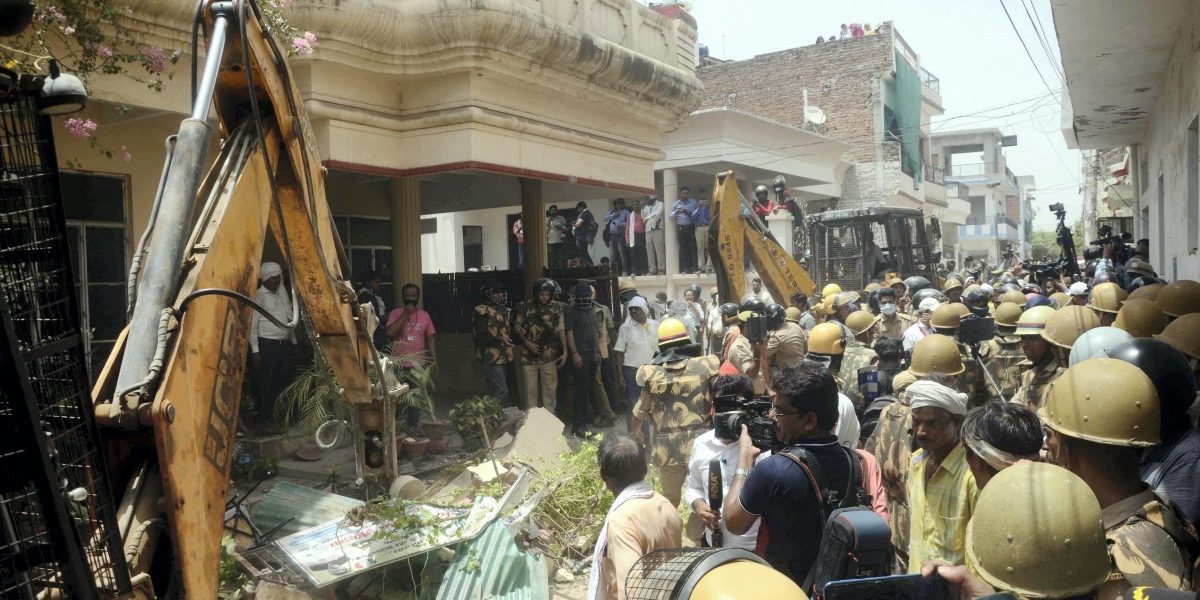 New Delhi: The Supreme Court on Wednesday, July 13, refused to pass an interim direction staying demolition of properties of accused involved in protests across various states, asking, “If under municipal law the construction is unauthorised, can an omnibus order be passed to restrain authorities?”

The apex court was hearing pleas by the Jamiat Ulema-i-Hind against bulldozer action in Uttar Pradesh and Madhya Pradesh and by New Delhi municipal bodies.

“What omnibus directions can we issue? Rule of law has to be followed, no dispute. But can we pass an omnibus order? If under the Municipal law the construction is unauthorised, can an omnibus order be passed to restrain authorities?,” a bench of Justices B.R. Gavai and P.S. Narasimha said, according to LiveLaw.

The Supreme Court on June 16, had asked the Uttar Pradesh government to not carry out demolition activities “except in accordance with law” and gave it three days to demonstrate how its recent drives had followed procedural and municipal laws.

The Jamiat had sought directions to the Uttar Pradesh government and other states to ensure that no further demolition of properties of alleged accused in recent protests be carried out.

At the outset, senior advocate Dushyant Dave, appearing for Jamiat, said the matter is extraordinarily serious and submitted that he came across a report in a newspaper where someone was accused of murder in Assam had had his house demolished.

“We don’t want this culture. Lordships will have to decide for once and all. They have to act in accordance with law. They cannot take advantage of municipal laws and demolish houses of someone who is merely accused of crimes,” said Dave.

“This country cannot permit this. We are a society governed by the rule of law which is the basic structure of the Constitution. It should be finally heard and disposed of,” Dave added, seeking an interim stay direction on the demolitions.

The senior lawyer submitted there is no material to show that other unauthorised houses were acted against and there is a “pick and choose” against other communities.

“There is a pick and choose against other community…The entire Sainik Farm is illegal. Nobody has touched it in 50 years. Look at the illegal farm houses in Delhi. No action taken. Selective action is [being] taken,” he said.

Senior advocate C.U. Singh, also appearing for one of the petitioners, said despite the status quo order in Delhi’s Jahangirpuri, the same modus operandi was followed in city after city.

Solicitor General Tushar Mehta said he has some objections with the locus of the petitioners.

The SG said that the petitioners are “unnecessarily” creating a “sensationalising hype,” according to LiveLaw.

“Replies have been filed by authorities that the procedure was followed and notices were issued. The demolition process started much before alleged riots. Merely because you take part in riots does not give you immunity from illegal constructions being demolished. Affected persons have already taken their remedy before various high courts.Let us not create a sensationalising hype unnecessarily,” Mehta said.

In response to Dave’s submission, he said all communities are Indian. “We cannot have community-based PILs,” he said.

Senior advocate Harish Salve, appearing for the Uttar Pradesh government, said there is a powerful argument on rule of law but the factual edifice may be a little “wobbly”.

He said the apex court cannot pass an order that a house of an accused should not be demolished notwithstanding any municipal law.

The top court asked the parties to complete pleadings in the matter, and said it will hear the plea filed by the Jamiat Ulama-i-Hind against demolitions on August 10.

Jamiat had said in its plea that no demolition of properties be carried out without following due process and such exercise is done only after adequate notice.

Demolition drives taken up by the Adityanath-led government in Uttar Pradesh had so far targeted Muslim residents who were labelled ‘masterminds’ within a day of clashes or protests. Soon after, buildings associated with them were demolished with the administration deeming them ‘illegal’. Jamiat’s fresh applications were filed after in Prayagraj, the administration destroyed the home of Welfare Party leader Javed Mohammad, a day after naming him a ‘key conspirator’ in the June 10 protests against BJP leaders’ comments against Islam. The house was notably in Mohammad’s wife’s name, even though the notice was in Mohammad’s name.

The organisation had already filed a plea on the issue of demolition of buildings in the Jahangirpuri area of the national capital. In response, the apex court had declared status quo against the North Delhi Municipal Corporation’s demolition drive, which followed a model similar to Uttar Pradesh’s. The two fresh pleas were added to this petition.