'No Improvement in Condition', SC to Hear Pleas on Farm Laws, Protests on January 11

Solicitor General Tushar Mehta, informing the bench that talks are going on between the Cenre and farmers in a "healthy atmosphere," said that these matters should not be listed for hearing on January 8. 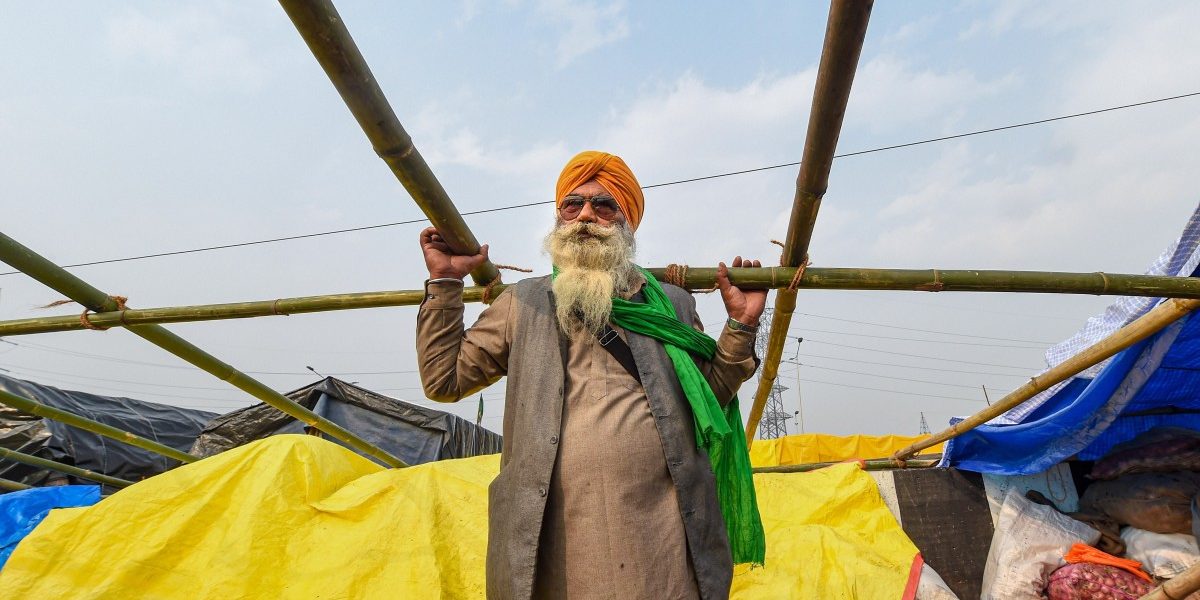 A farmer repairs a makeshift tent during their agitation against new farm laws, at Delhi-UP border near Ghazipur, in New Delhi, Tuesday, Jan. 5, 2021. Photo: PTI

New Delhi: The Supreme Court on Wednesday said it would hear on January 11 a batch of pleas challenging the new farm laws and also the ones raising issues related to the ongoing farmers’ protest at the Delhi borders.

A bench headed by Chief Justice S.A. Bobde, which observed that there is no improvement on the ground regarding farmers’ protests, was informed by the Centre that discussions are going on between the government and farmers over these issues.

Attorney General for India K.K. Venugopal said there is a good chance that parties may come to a conclusion in the near future and filing of response by the Centre on the pleas challenging the new farm laws might foreclose the negotiations between the farmers and government.

Solicitor General Tushar Mehta, while informing the bench that talks are going on between the government and farmers in a “healthy atmosphere,” said that these matters should not be listed for hearing on January 8.

“We understand the situation and encourage the consultation. We can adjourn the matters on Monday (January 11) if you submit the same due to the ongoing consultation process,” the bench said.

The top court was hearing a plea filed by advocate M.L. Sharma, challenging the farm laws.

The bench issued notice to the Centre seeking its response on Sharma’s plea which has alleged that the Central government has no locus under the constitution to frame these laws.

During the hearing, conducted through video-conferencing, the bench said at the outset, “These are farm matters. Where are the other matters? When they are listed? We are going to hear all the matters together.”

The bench asked Mehta to find out the status of other matters and as to when they are listed. Mehta said that no specific date was given earlier for hearing on these pleas.

“We are keeping this plea (filed by Sharma) for hearing on Friday and we allow the amended petition to be taken on record in the meanwhile,” the bench said.

“M.L. Sharma always files startling petitions and he says that the Centre has no power to make laws,” the bench observed, adding, “Mr Sharma says that you (the Centre) are colluding and making laws.”

The top court said it would take up the plea along with other pending matters because it thinks that the condition has not improved already.

The apex court had earlier issued notice and sought the Centre’s response on a batch of pleas against the three contentious farm laws, Farmers’ (Empowerment and Protection) Agreement on Price Assurance and Farm Services Act, 2020, Farmers’ Produce Trade and Commerce (Promotion and Facilitation) Act, 2020 and The Essential Commodities (Amendment) Act, 2020.

While hearing the pleas on the issue of farmers’ protests, the top court had on December 17 said that the agitation should be allowed to continue without impediment and this court will not interfere with it as the right to protest is a fundamental right.

The apex court had acknowledged the right of farmers to protest peacefully without infringing upon the fundamental rights of others.

In its December 17 order, the bench had said: “We clarify that this court will not interfere with the protest in question. Indeed the right to protest is part of a fundamental right and can as a matter of fact, be exercised subject to public order. There can certainly be no impediment in the exercise of such rights as long as it is non-violent and does not result in damage to the life and properties of other citizens and is in accordance with law.”

“We are of the view at this stage that the farmers’ protest should be allowed to continue without impediment and without any breach of peace either by the protesters or the police,” the Supreme Court had said.