While the Supreme Court Bar and Advocates-On-Record associations have expressed reservations against 'procedural impropriety' by the CJI, the Employees' Association has thrown its weight behind him. 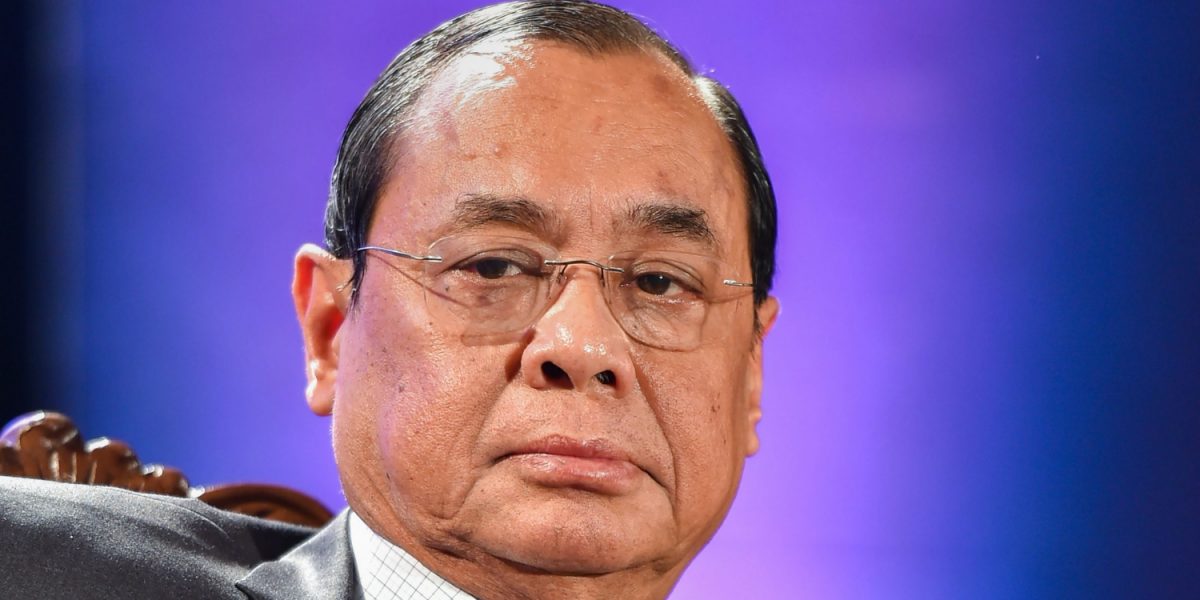 New Delhi: Two days after allegations of sexual harassment against Chief Justice of India (CJI) Ranjan Gogoi were made by a former member of his staff, the legal community is having a hard time dealing with the crisis in the Supreme Court.

The association took objection to the way the CJI, soon after the allegations surfaced on 20 April, constituted a three-judge bench, which included himself, to respond to the allegations. The CJI termed the allegations against him as part of a “bigger” plot to “deactivate” him. Resolution passed by the Supreme Court Advocates on Record Association

Calling the convening of a ‘special bench’ by the CJI a “grave failure of due process”, Senior advocate Raju Ramachandran told LiveLaw,

When an allegation of sexual harassment is made, the person concerned is fully entitled to assert his innocence, but without shaming the accuser. A public announcement to the media or a personal communique by the CJI would have been fully justified. But for the sake of public confidence in the judiciary, it was important for the CJI to state that he himself wanted the matter inquired into, by a mechanism which his colleagues in the court could determine in accordance with law and established procedure.

The bizarre procedure which was actually adopted, with the CJI sitting on the Bench doesn’t enhance the independence of the judiciary in any manner. It is a matter of regret that neither the two other judges on the Bench nor the law officers and the President of the Bar offered their legal views on proper procedure. What happened on Saturday was a grave failure of due process. Condemnation of the accuser in her absence has brought little credit to all those involved in Saturday’s proceedings”.

In an article in The Hindu, eminent lawyer Dushyant Dave wrote, “The constitutions of the bench, of course in the exercise of the power of the Master of the Rolls, Chief Justice Gogoi himself styling it as “a matter of great importance touching upon the Independence of Judiciary’, and permitting mention by the Solicitor General are all acts done by the CJI contrary to ‘nemo judex in causa sua.”

The constitution of bench was seen by many as unprecedented as it was formed without listing a cause, or a matter, or petition. Some lawyers thought that the bench subverted the power of the Supreme Court’s internal complaints committee, which has its own “in-house procedure” to deal with allegations of sexual harassment. Generally, an inquiry committee takes note of the accusations and initiate proceedings on the matter after sending a notice to the respondent (in this case the CJI himself).

The SCAORA thought, “The allegations of the ex-employee of the Supreme Court have to be dealt with as per the established procedure of law and law must be applied in each and every case uniformly.”

The association said that it “strongly disapproves the manner in which the complaint was dealt with and seeks inquiry and action in the above matter.”

It also demanded that an inquiry committee “headed by full court of the SC” be formed to “impartially investigate” the allegations against the CJI.

Similarly, the Supreme Court Bar Association also took exception to the way the CJI convened the emergency hearing. “… the procedure adopted for the court proceedings on 20.04.2019 in the matter of allegations made by ex-employee of the Supreme Court against the hon’ble CJI is in violation of procedure established by law as well as principles of natural justice.” 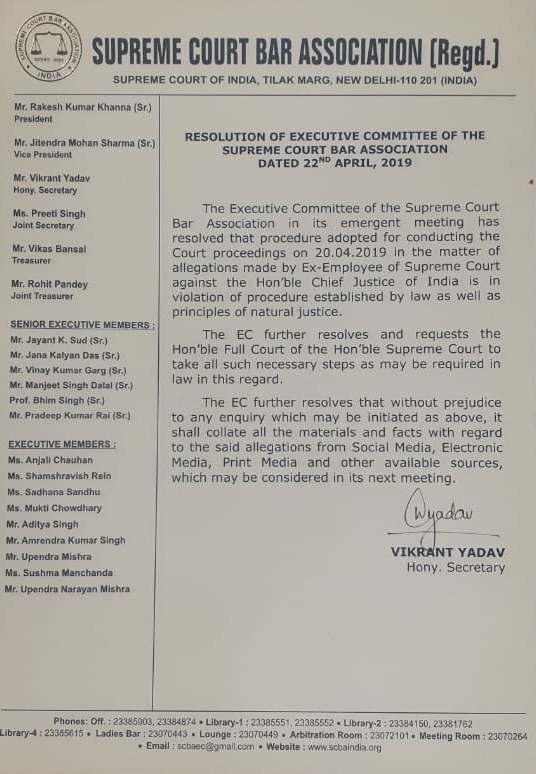 The Bar Association also demanded non-partisan enquiry into the matter. The association also resolved to “collate all the materials and facts with regard to the said allegations from social media, electronic media, print media and other available sources” and discuss the issue in its next meeting.

While many eminent lawyers have pointed out the seeming procedural violations in the matter, the Supreme Court Employees Welfare Association (SCEWA) stood in support of the CJI.

In a statement, B.A. Rao, president of the SCEWA condemned what he described as “false, fabricated and baseless allegations” against the CJI.

Almost repeating the CJI’s words when he defended himself on April 20, Rao said, “Such unscrupulous allegations are aimed at maligning the institution.”

“In this house of time, the entire staff is united and stand firmly with the Hon’ble CJI to defeat the malicious attempt of external forces to target the Indian Judiciary,” it said.

Interestingly, Rao figures prominently in the 35-year-old former SC employee’s allegations against the CJI. Rao supervised her when she was posted in the apex court’s library.

The former employee of the SC has alleged that once she spurned Justice Gogoi’s sexual advances, she was kept under a watch and victimised at the court, which led to her dismissal from service on flimsy grounds.

From October to November 2018, when she alleged she was being frequently transferred without any reason, she had, in fact, shared her trauma with Rao.

When she was eventually dismissed from service, one of the charges against her was that she asked Rao to stop her then supervisor, Padma Sundar of the Admin Material section, from changing her seat in office.

When reporters got in touch with Rao to corroborate the woman’s claims on March 19, he acknowledged that she was dismissed on charges of “insubordination and indiscipline.” But when pressed harder to divulge more details about the case, he declined to comment. He said he was “prohibited to interact with journalists”. However, when asked whether he knows about her case, he added, “I mean any employee of the Supreme Court is aware. Not only me.”