Article 370: What the SC Will Have to Consider While Examining the Centre's Move

The doctrine of colourable legislation, which tests the competence of legislature against an enacted law, is likely to play a huge role.

A signboard is seen outside the premises of Supreme Court in New Delhi, India, September 28, 2018. Credit: Reuters/Anushree Fadnavis

The presidential order issued on August 5, using a provision in Article 370 to amend Article 367, the interpretation clause in Indian Constitution, and made the special provisions of Article 370 inoperative in Jammu & Kashmir, has again raised the issue of legislative competence overriding the consent of the people.

Based on the Section 6(1) of the Government of India Act, 1935, the erstwhile princely state of Jammu & Kashmir executed an instrument of accession for joining Indian federation with a rider, in the form of a letter along with the instrument of accession, that the permanent accession will be decided by the people of the state, which was acknowledged by Government of India in the White Paper on Jammu & Kashmir, published in 1948.

The process of amendment of Article 370 was made simpler by presidential order, than by Article 368, but only with the consent of the state. Even though a majority of the provisions of the Indian Constitution has already been implemented in J&K, Article 370 gave a slender hope for the people to negotiate better autonomy. Till date, the accession didn’t integrate the people of Jammu and Kashmir due to lack of mutual trust and confidence.

The legality of this move will be examined by the Supreme Court’s constitutional bench, keeping in mind the principles of federalism, which is one of the basic structures of the Indian Constitution. The legislative competence of this action will be tested against the doctrine of colourable legislation, which limits the constituted power of parliament in India.

The doctrine of colourable legislation tests the competence of legislature against an enacted law. This doctrine is based upon the Latin maxim “Quando aliquid prohibetur ex directo, prohibetur et per obliquum”, which means “you cannot do indirectly what you cannot do directly”, and based on the doctrine of separation of powers.

The genealogy of this doctrine could be traced to the colonial period, when self-government started assuming significance in many parts of the British Empire and the Commonwealth. The legislative subjects were divided between the Centre and provincial units and to check any contravention, the enacted Act was tested against this doctrine. Courts in India have taken the help of Australian and Canadian legal precedents while dealing with colourable legislation, as the Constitutions of both countries do not have a bill of rights, giving them a wider scope for centralisation of power. Canada, however, made a bill of rights part of its Constitution in 1982.

The Constituent Assembly of India, while deliberating the legislative competence of parliament, had given scope for the judiciary to stop the colourable legislation. Alladi Krishnaswami Ayyar said:

“It is an accepted principle of Constitutional Law that when a Legislature, be it the Parliament at the Centre or a Provincial Legislature, is invested with a power to pass a law in regard to a particular subject matter under the provisions of the Constitution, it is not for the Court to sit in judgment over the Act of the Legislature…Of course, if the legislature is a colourable device, a contrivance to outstep the limits of the legislative power or to use the language of private law, is a fraudulent exercise of the power, the Court may pronounce the legislation to be invalid or ultravires”.

Watch: Article 370: How Legal Is the Centre’s Assault on Kashmir’s Status?

Even Jawaharlal Nehru, while upholding legislative supremacy, restricted its absolute power and said:

After independence, the zamindars, taking a cue from the Constituent Assembly debates, challenged the Zamindari Abolition Acts as colourable legislation. Even though the courts didn’t consider their prayers, the Supreme Court in Kameshwar Singh case (1950), while considering the Bihar Land Reform Act, struck down two provisions in the name of colourable legislation. The court quoted Australian and Canadian cases as precedent to decide the case. Justice S.R. Das, who gave dissenting judgment, said that the colourable legislation on ultimate analysis is a picturesque and epigrammatic way of expressing non-compliance with the constitution.

In Narayan Deo vs State of Orissa (1953), the Supreme Court said:

Thus a mere indirect method adopted by legislature to realise certain objects will not attract the doctrine of colourable legislation, till the objects to be achieved are within the legislative competence of the legislature. Further in All India Bank Employee’s Association vs National Industrial Tribunal (1961), the court held that:

“Objections based on colourable legislation have relevance only in situations when the power of the legislature is restricted to particular topics, and an attempt is made to escape legal fetters imposed on its powers by resorting to forms of legislation calculated to mask the real subject-matter.”

A mere indirect method adopted by legislature to realise certain objects will not attract the doctrine of colourable legislation. The Supreme Court of India. Photo: The Wire

According to Carl Schmitt, German Jurist:

“Constituent power ‘is the political will, whose power or authority is capable of making the concrete, comprehensive decision over the type and form of its own political existence’. It is ‘concrete political being’. It determines the nature of the institutional arrangement of political unity.”

The legislative body holds constituted power, which is a creation of constituent power with certain limitations/restrictions and cannot be equated with constituent power. The Indian Constitution didn’t elaborate on this difference and the parliament enjoyed unlimited power under Article 368 to amend the Constitution. But the judicial interpretation starting Kesavananda Bharati case (1973) has restricted the constituted power of the parliament in the form of establishing unamendable basic structure of the Constitution. 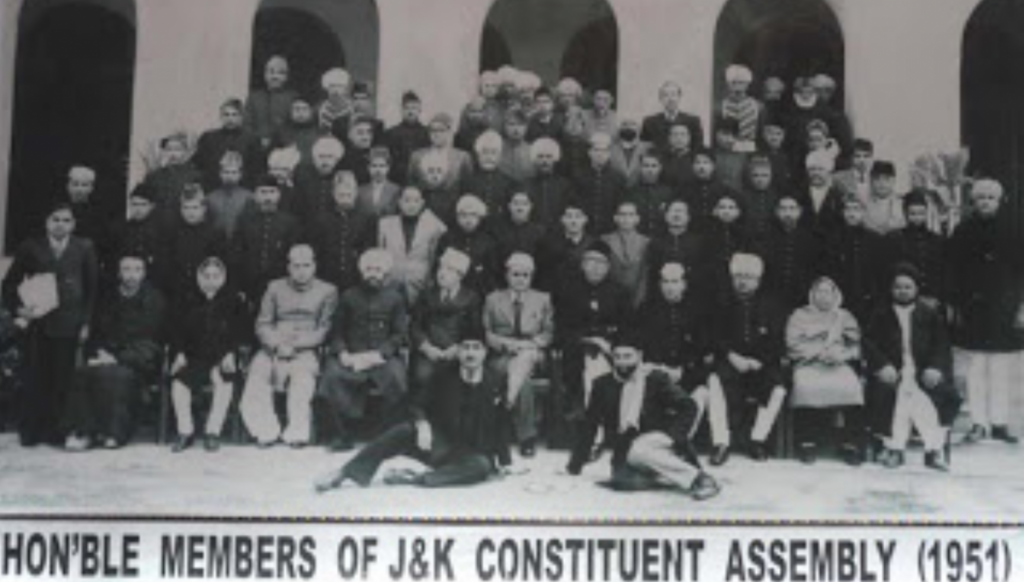 The constitutional bench has an uphill task of interpreting and deciding the case as it involves the political future of J&K people. Even though the Constituent Assembly doesn’t exist, the political consent/will of the people of J&K has to be respected to arrive at a meaningful solution for the Kashmir problem.