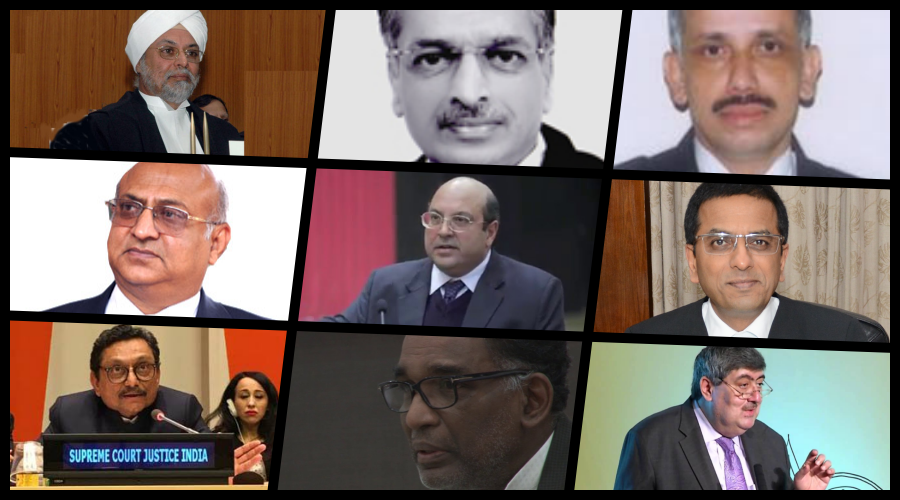 The judges who ruled that the right to privacy is a fundamental right. Credit: PTI/Youtube/High court websites

New Delhi: A nine-judge bench of the Supreme Court has ruled that Indians enjoy a fundamental right to privacy, that it is intrinsic to life and liberty and thus comes under Article 21 of the Indian constitution.

On Thursday, the bench, led by Chief Justice J.S. Khehar, pronounced a unanimous judgement even if the judges   had slightly different arguments as to how privacy is intrinsic to right to life and liberty.

In its 547-page judgment that declares privacy to be a fundamental right, the Supreme Court has overruled verdicts given in the M.P. Sharma case in 1958 and the Kharak Singh case in 1961, both of which said that the right to privacy is not protected under the Indian constitution.

The judgment also included a two-page final order, which states that MP Sharma and Kharak Singh are overruled, and the right to privacy is fundamental.

The lead judgment of 265 pages, authored by Justice D.Y. Chandrachud and co-signed by Chief Justice Khehar and Justices Nazeer and Agrawal states the following clear conclusions:

1 The judgment in M P Sharma holds essentially that in the absence of a provision similar to the Fourth Amendment to the US Constitution, the right to privacy cannot be read into the provisions of Article 20 (3) of the Indian Constitution. The judgment does not specifically adjudicate on whether a right to privacy would arise from any of the other provisions of the rights guaranteed by Part III including Article 21 and Article 19. The observation that privacy is not a right guaranteed by the Indian Constitution is not reflective of the correct position. M P Sharma is overruled to the extent to which it indicates to the contrary.

2 Kharak Singh has correctly held that the content of the expression ‘life’ under Article 21 means not merely the right to a person’s “animal existence” and that the expression ‘personal liberty’ is a guarantee against invasion into the sanctity of a person’s home or an intrusion into personal security. Kharak Singh also correctly laid down that the dignity of the individual must lend content to the meaning of ‘personal liberty’. The first part of the decision in Kharak Singh which invalidated domiciliary visits at night on the ground that they violated ordered liberty is an implicit recognition of the right to privacy. The second part of the decision, however, which holds that the right to privacy is not a guaranteed right under our Constitution, is not reflective of the correct position. Similarly, Kharak Singh’s reliance upon the decision of the majority in Gopalan is not reflective of the correct position in view of the decisions in Cooper and in Maneka. Kharak Singh to the extent that it holds that the right to privacy is not protected under the Indian Constitution is overruled.

3 (A) Life and personal liberty are inalienable rights. These are rights which are inseparable from a dignified human existence. The dignity of the individual, equality between human beings and the quest for liberty are the foundational pillars of the Indian Constitution;

(B) Life and personal liberty are not creations of the Constitution. These rights are recognised by the Constitution as inhering in each individual as an intrinsic and inseparable part of the human element which dwells within;

(C) Privacy is a constitutionally protected right which emerges primarily from the guarantee of life and personal liberty in Article 21 of the Constitution. Elements of privacy also arise in varying contexts from the other facets of freedom and dignity recognised and guaranteed by the fundamental rights contained in Part III;

(D) Judicial recognition of the existence of a constitutional right of privacy is not an exercise in the nature of amending the Constitution nor is the Court embarking on a constitutional function of that nature which is entrusted to Parliament;

(E) Privacy is the constitutional core of human dignity. Privacy has both a normative and descriptive function. At a normative level privacy sub-serves those eternal values upon which the guarantees of life, liberty and freedom are founded. At a descriptive level, privacy postulates a bundle of entitlements and interests which lie at the foundation of ordered liberty;

(F)Privacy includes at its core the preservation of personal intimacies, the sanctity of family life, marriage, procreation, the home and sexual orientation. Privacy also connotes a right to be left alone. Privacy safeguards individual autonomy and recognises the ability of the individual to control vital aspects of his or her life. Personal choices governing a way of life are intrinsic to privacy. Privacy protects heterogeneity and recognises the plurality and diversity of our culture. While the legitimate expectation of privacy may vary from the intimate zone to the private zone and from the private to the public arenas, it is important to underscore that privacy is not lost or surrendered merely because the individual is in a public place. Privacy attaches to the person since it is an essential facet of the dignity of the human being;

(G) This Court has not embarked upon an exhaustive enumeration or a catalogue of entitlements or interests comprised in the right to privacy. The Constitution must evolve with the felt necessities of time to meet the challenges thrown up in a democratic order governed by the rule of law. The meaning of the Constitution cannot be frozen on the perspectives present when it was adopted. Technological change has given rise to concerns which were not present seven decades ago and the rapid growth of technology may render obsolescent many notions of the present. Hence the interpretation of the Constitution must be resilient and flexible to allow future generations to adapt its content bearing in mind its basic or essential features;

(H) Like other rights which form part of the fundamental freedoms protected by Part III, including the right to life and personal liberty under Article 21, privacy is not an absolute right. A law which encroaches upon privacy will have to withstand the touchstone of permissible restrictions on fundamental rights. In the context of Article 21 an invasion of privacy must be justified on the basis of a law which stipulates a procedure which is fair, just and reasonable. The law must also be valid with reference to the encroachment on life and personal liberty under Article 21. An invasion of life or personal liberty must meet the three-fold requirement of (i) legality, which postulates the existence of law; (ii) need, defined in terms of a legitimate state aim; and (iii) proportionality which ensures a rational nexus between the objects and the means adopted to achieve them; and

(I) Privacy has both positive and negative content. The negative content restrains the state from committing an intrusion upon the life and personal liberty of a citizen. Its positive content imposes an obligation on the state to take all necessary measures to protect the privacy of the individual.

4 Decisions rendered by this Court subsequent to Kharak Singh, upholding the right to privacy would be read subject to the above principles.

5 Informational privacy is a facet of the right to privacy. The dangers to privacy in an age of information can originate not only from the state but from non-state actors as well. We commend to the Union Government the need to examine and put into place a robust regime for data protection. The creation of such a regime requires a careful and sensitive balance between individual interests and legitimate concerns of the state. The legitimate aims of the state would include for instance protecting national security, preventing and investigating crime, encouraging innovation and the spread of knowledge, and preventing the dissipation of social welfare benefits. These are matters of policy to be considered by the Union government while designing a carefully structured regime for the protection of the data. Since the Union government has informed the Court that it has constituted a Committee chaired by Hon’ble Shri Justice B N Srikrishna, former Judge of this Court, for that purpose, the matter shall be dealt with appropriately by the Union government having due regard to what has been set out in this judgment.

Justice Chelameswar’s judgment by The Wire on Scribd

Justice Bobde’s judgment by The Wire on Scribd

Justice Nariman’s judgment by The Wire on Scribd

Justice Sapre’s judgment by The Wire on Scribd

Justice Kaul’s judgment by The Wire on Scribd

The judgment also included a two-page final order, which states that MP Sharma and Kharak Singh are overruled, and the right to privacy is fundamental.

Order of the Court by The Wire on Scribd

The petitioners, former Karnataka high court judge Justice K.S. Puttaswamy and others, had contended that the biometric data and iris scan that was being collected for issuing Aadhaar cards violated the citizen’s fundamental right to privacy as their personal data was not being protected and was vulnerable to exposure and misuse.

The petitioners had argued that right to life under Article 21 of the constitution would include the right to privacy though it is not expressly stated in the constitution. It was also argued that privacy is a broader concept and data sharing is only one aspect of privacy. Subramanium had argued, “Privacy is about the freedom of thought, conscience and individual autonomy and none of the fundamental rights can be exercised without assuming certain sense of privacy”.

He also said the state is under an affirmative obligation to protect the fundamental rights of its citizens. “Liberty is fundamental to democracy and citizens cannot exist without privacy.”

In the age of the internet, a person should have control on how much he should put forward and not be compelled. There hardly exists any data protection in the digital age, inevitably leading to a compromise in privacy. During the course of arguments, it was brought to the court’s attention that Union finance minister Arun Jaitley, during discussions in the Rajya Sabha on the Aadhaar Bill in March 2016, had said that the right to privacy was a fundamental right, but now the government is claiming the opposite.

Subramanium had said, “Privacy is a broader concept and data sharing is only one aspect of privacy. Privacy is about the freedom of thought, conscience, and individual autonomy and none of the fundamental rights can be exercised without assuming certain sense of privacy”. He added that the state is under an affirmative obligation to protect the fundamental rights of citizens. He said, “Liberty existed prior to constitutional era and the law had merely recognised its existence. Liberty, which is fundamental to democracy and citizens, cannot exist without privacy”.

The attorney general also made clear that the right to privacy cannot fall in the bracket of fundamental rights as there are binding decisions of larger benches that it is only a common law right evolved through judicial pronouncements. “The government said Aadhaar would not fall under the right to privacy. We can’t say every encroachment of privacy is to be elevated to fundamental right. The claim to liberty has to subordinate itself to right to life of others,” he said. On Aadhaar, he referred to the World Bank’s statement that an identity system should be followed by every developing country.