Explained: Seven Dead-Ends if You’re a Victim of Sexual Harassment in the Supreme Court

Finance minister Arun Jaitley attacked the woman who complained against the Chief Justice of India for not going to the “appropriate committee”. It turns out there is no such committee.

New Delhi: “May it please your lordships,” is the title of a PDF going around on WhatsApp, apparently by “some young members of the bar.” It lists the addresses of all 27 judges of the Supreme Court with some basic instructions: Print out a copy of the sexual harassment in the workplace Act and post it to the judges.

It has been a month since four media organisations, including The Wire, reported on allegations of sexual harassment levelled by a former court employee against India’s chief justice. On 21 April, a senior BJP leader and Union finance minister Arun Jaitley wrote a blog questioning both the woman and those who reported her story.

In his blog, he claimed that the complainant had somehow not followed the right procedure necessary to make complaints of sexual harassment against the Chief Justice of India (CJI). He said:

Such complaints, when they are made in the ordinary course of any administrative functioning, are referred to the appropriate committee. However, when the complainant distributes copies of her representation to other judges of the Supreme Court and the media in order to sensationalise her allegations, it ceases to be routine. (emphasis added)

Jaitley has previously been India’s law minister and presumably knows how the law works. But what is this “appropriate committee” and “ordinary course of any administrative functioning” he referred to?

A close look at the law as it is being applied within the Supreme Court shows that Jaitley is wrong. There is in fact no forum for a woman employee or former employee to complain of sexual harassment against the CJI. In fact, nearly every turn for a woman complainant in such a situation meets a dead-end.

Apart from the hundreds of lawyers, journalists and litigants who crowd Indian courtrooms, there are currently 2,016 officers of the Supreme Court: 1,580 men and 435 women. This makes it a blatantly unequally gendered workplace, especially for women from marginalised communities, who may be preyed on by men with power. 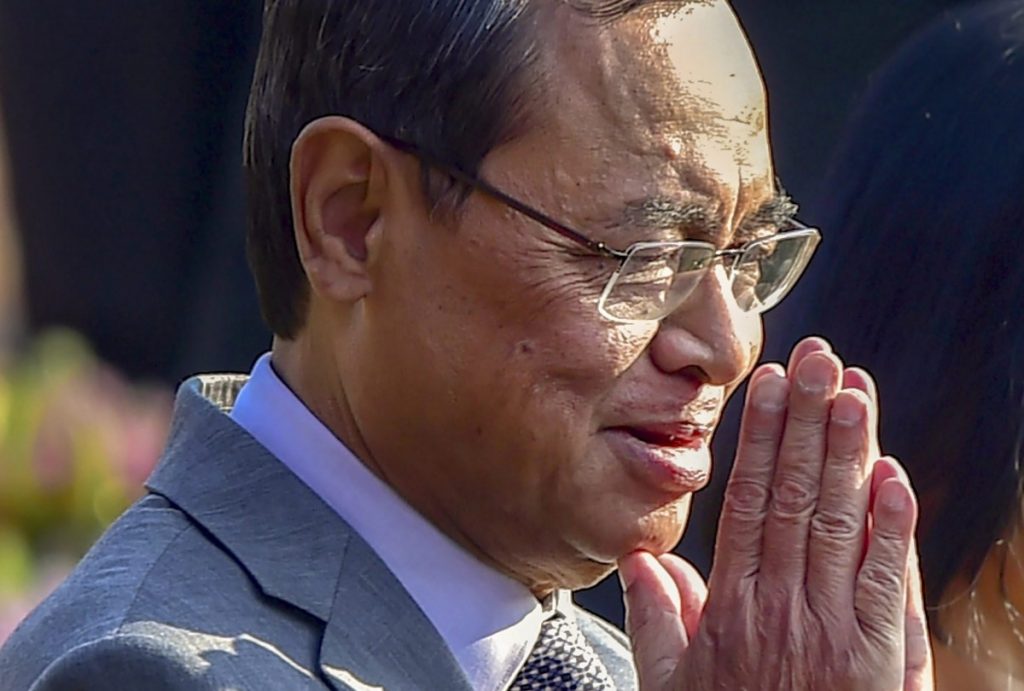 The POSH Act is concerned with some of these variables:

The Act gives women a civil remedy for sexual harassment. The criminal route of filing an FIR and going to trial, is also open to women under Sections 354 A, 354 IPC.

But it is ironic that for women in the legal field, even in the Supreme Court, who want to seek remedies for sexual harassment, there are in fact just a handful of very tumultuous options.

Using the  interactive  graphic designed by The Wire, one can check out at least 60 pathways in law, also known as “due process,” that a woman could try using, if she needs to make a civil complaint about sexual harassment in the legal field, especially in the Supreme Court.

But only in 11 of these options is there an actual pathway in law that she can practically use. In 37 cases, the options in law turn out to be a dead-end for her, and in 12 cases the law is not clear on whether she could try that pathway or not.

Non-staffers can complain about sexual harassment to the GSICC.  It is composed of 11 people, headed by a female judge, Justice Indu Malhotra. It also has one other judge on it, one additional registrar, two senior advocates, two advocates, one advocate-on-record, one clerk and two external members. Women who are court-staff/employees  are not allowed to complain here.

Also Read: Interview | ‘I Have Lost Everything’: Woman Who Alleged Sexual Harassment by CJI Gogoi

Staffers need to complain to a different committee, called the ‘Internal Complaints Committee’ which has five members, headed by a woman additional registrar, and includes another three court staff and one external member. It only hears complaints by or about staffers.

Envisioning these scenarios above shows up some dead-ends for women due to dangerous holes/gaps in the law:

Contrary to Jaitley’s casual assertion, the woman in the current case, who is accusing the CJI, could not make a complaint in the Supreme Court because of five dead-ends she faced:

Once again, remember what Jaitley said, that her complaint should have been referred to the “appropriate committee.” But from the discussion above, it is clear that there is no committee to which a complaint against the CJI can be brought.

Of course, all these dead-ends don’t mean that inquiries cannot be undertaken at all. In the current case where the ex-staffer has accused the CJI of harassment, a three-member committee was constituted with the second most senior judge of the Supreme Court and two women judges.

Since India’s POSH Act does not exclude the CJI from being inquired into for sexual harassment – it is only the In-House Procedure which was written by judges of the Supreme Court themselves which excludes the CJI – the Supreme Court in the current case could have decided to simply apply the POSH Act. This would have meant the setting up of a committee which is headed by a woman, likely the senior-most woman judge, and it would have had an external member. (In fact, the attorney general is on record as recommending that the committee have retired judges as members). In addition, if the court had chosen to apply the POSH Act, the statements by the defendant and the complainant would have been recorded and transcripts given to both parties, and the complainant would have been allowed to have a support-person accompanying her during the inquiry. Finally, a copy of the report would have to have been given to both parties

None of this was followed in the current case at head, triggering the complainant in this case to refuse to participate anymore in the inquiry as she felt it was unfair. The Supreme Court carried on without her anyway and declared her allegations to be without substance. The court has refused to give her a copy of the report about her own case where they came to this conclusion. She also thus has no avenue available to contest the committee’s finding. All of this violates the POSH Act at the very least, and the concept of natural justice at its most elementary level. 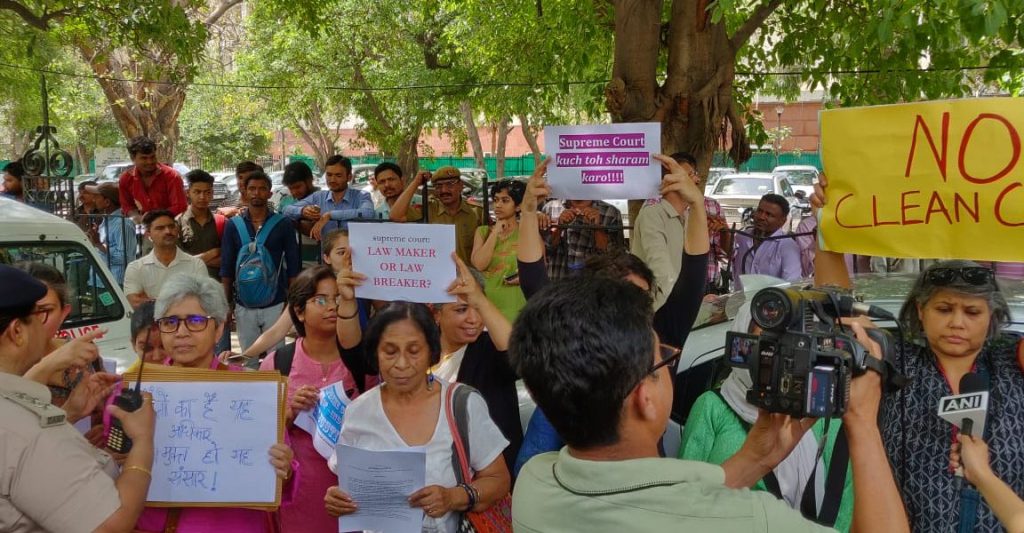 Women protesting the in-house committee giving a clean hit to CJI Ranjan Gogoi over allegations of sexual harassment on May 7. Credit: The Wire

A significant blind spot which needs to be urgently remedied so that a woman victim does not find herself without any legal options to pursue justice is when a Supreme Court employee is sexually harassed within the court’s precincts by someone who is not a court employee.

Generally speaking, a woman who faces sexual harassment within the court’s precincts could be a lawyer, a journalist, a litigant, or a court-staffer such as a stenographer or someone who works in the library, etc.

While the POSH Act 2013 covers all of these women – i.e. they should all be able to complain about their harassment to the GSICC – the Supreme Court’s 2013 Regulations prevent women employees from seeking redressal through this route.

The POSH Act says that an “aggrieved woman,” or the victim, is “in relation to a work place, a woman of any age whether employed or not, who alleges to have been subjected to any act of sexual harassment by the respondent.”

Also Read: The Smothering of Justice at India’s Highest Court

But the Supreme Court’s own 2013 Regulations, which were supposed to be written in accordance with this act, changes the definition of “aggrieved woman” to say that a victim “does not include any female who is already governed by the Supreme Court service regulations.”

Does this mean a woman court-staffer can file a sexual harassment complaint against a non-staffer at the Supreme Court’s internal complaints committee then, if not the GSICC?  The answer is again no, because this committee cannot hear complaints against non-staffers.

This places an unfair burden on women court staff who may have been sexually harassed by men who are not staffers. They have to either quit their job, in order to be able to file a complaint at the GSICC, or they have to continue working with the knowledge that they cannot seek justice for their sexual harassment.

Dead-end 7: The ‘in-house procedure’ for judges is itself an “informal” one

Judges in the Indian system as it stands today can be inquired into only under what is called an “In-House Procedure” (IHP), adopted in 1999 by the full Supreme Court.

The IHP specifically says it is not a ‘formal judicial inquiry’ but a ‘fact finding inquiry.’ Thus the IHP expressly says there will be no examination or cross examination of witnesses or any representation by lawyers.

The IHP also says it will “devise its own procedure” for this inquiry, but that it should be “consistent with the principles of natural justice.”

But here are the problems. First of all, the CJI is envisaged to be exempt from any inquires under the IHP. The IHP does not formally envision a scenario where an inquiry will have to be made into alleged misconduct by the CJI. It envisages a process only for allegations made against judges of the Supreme Court and high courts, and against chief justices of high courts. In the current case, an ad-hoc process appears to have been grafted on to the “informal” process, by which the senior-most puisne judge took up the woman’s complaint against the CJI

Secondly, the buck starts and stops with the CJI. Anyone who wants to make a complaint against a judge will have to send that to the CJI first. Even the President of India forwards these complaints to the CJI. If “he is of the opinion that the matter needs a deeper probe,” then it is the CJI himself who will constitute a committee for inquiry. And when the committee comes out with its findings, who do they send the report to for further action? The CJI. This too, makes the IHP a dead-end for all practical purposes – a woman who alleges sexual harassment by India’s Chief Justice can hardly be expected to treat this as a viable option.