Despite Courts Saying It Can't Be, Sedition Law Is Used to Vilify Dissenters

Many people are reviled as ‘anti-national’, ‘tukde-tukde gang’ or for speaking ‘Pakistan’s language’, and sedition cases are slapped on them. But why is the state intent upon ignoring previous court orders? 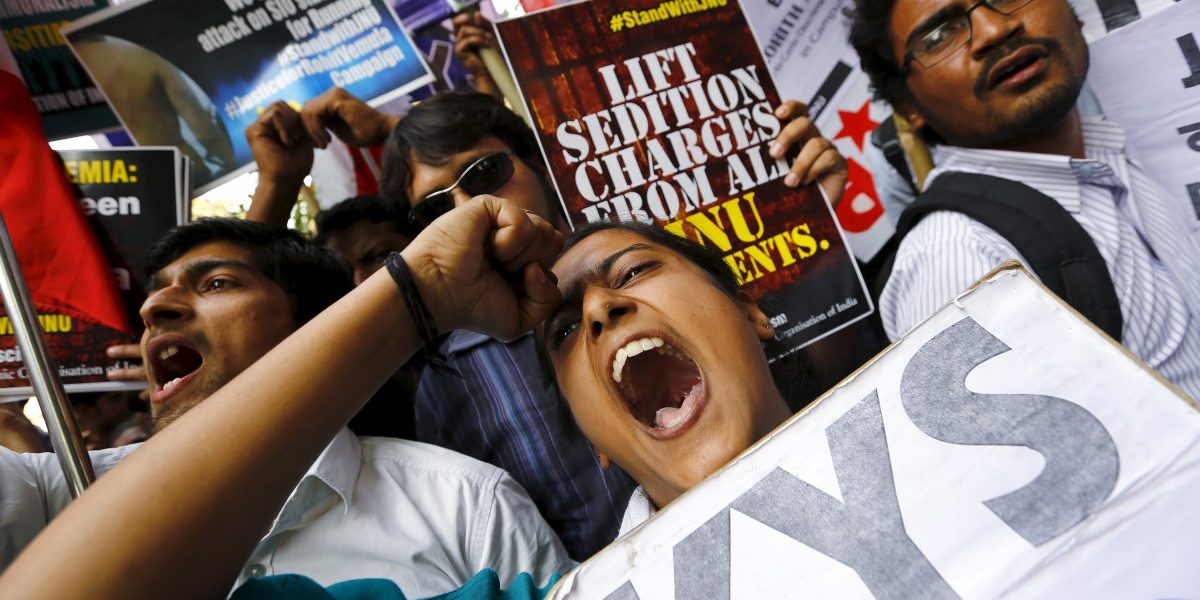 Seventy years after independence, in the year 2018, the police registered as many as 70 cases of sedition across the country. An analysis of National Crime Records Bureau data in January 2019 had found a spike in sedition arrests since the beginning of 2014.

Do we really have a large number of educated people who do not love their country enough and intend to do it harm or are outright traitors? Those who downplay the spike in arrests since 2014 can argue that such people have been there all along and the recent higher number of cases just reflects more proactive action by the police. The question is why a great country as ours should have so many traitors in the first place. Has our experiment of nation-building failed somewhere? If so, we should address the root causes instead of just prosecuting people. However, given the fact that there were only two convictions in three years, there are reasons to believe that the police are blatantly abusing their powers.

In the US, another great democracy of the world we compare ourselves with, sedition is not a commonly charged offence. Most high-profile seditious conspiracy cases (two out of five during 1936-2010) ending in conviction involved Puerto Rican nationalists plotting to overthrow the US and assert their independence. Clearly, the American government does not think that its citizens do not love their country enough.

In India, people have been charged with sedition for liking a Facebook post, criticising a yoga guru, cheering a rival cricket team, drawing cartoons, asking a provocative question in a university exam or not standing up in a cinema when the national anthem was being played. An advocate had filed a private complaint of sedition against actor Divya Spandana@Ramya in 2016 for saying “Pakistan is not hell, people there are like us.” The JFMC Court in Madikeri observed that Pakistan was not officially an enemy state, and that praising its citizens did not amount to sedition. Another advocate had got a sedition case registered through a Muzaffarpur court against 49 people for making public a letter, which in his opinion, tried to ‘tarnish the image of the PM and the country’. Eventually, after public outcry, Bihar police closed the case.

Is talking about secession, not liking India or being anti-Indian a crime?

Karan Thapar recalls C.N. Annadurai demanding self-determination for Dravidians and a separate country for southern India in the Rajya Sabha on May 1, 1962. He was not charged with anything. Perhaps they had correctly understood the landmark judgment in the case of Kedar Nath Singh, delivered on January 20, 1962. The judgment distinguished between words, which have implicit in them the idea of subverting government by violent means to cause public disorder, from disapprobation of actions of the government, however strong. In 2016, in Common Cause & Another v. Union of India, the Supreme Court reaffirmed the principles.

This means that if some people say that they do not like India and want to secede peacefully, it would not be sedition. However, if they say that, in the process, they want to overthrow the government by force, it would be sedition.

Also read | Justice Deepak Gupta: Law of Sedition Needs to be Toned Down if Not Abolished

Fali S. Nariman had remarked that to be ‘anti-Indian’ may be distasteful to most citizens but it is not a criminal offence, and it is definitely not ‘sedition’. He clarified that sedition had been purposefully excluded from Article 19(2), the exception clause to free speech, only because, as the founding fathers had said, “Sedition is not made an offence in order to minister to the wounded vanity of governments!” Soli Sorabjee also maintained that shouting slogans like ‘Pakistan zindabad’ was not sedition. Their opinion is, of course, not the law; however, they are men who know the law!

Criticising the ‘mutual butchery’ behind which stood ‘vast forces of national greed and hatred’ and atavistic nationalism, Bertrand Russell had opposed Britain’s ‘share in the destruction of Germany’ in the First World War. They fined him £100 in June 1916 for making statements likely to prejudice the recruitment and discipline of HM forces, and then sentenced him to six months in prison in February 1918. The flimsy charge under the Defence of the Realm Act was for making a statement ‘intended and likely’ to prejudice the relations with the United States and for publicly supporting a negotiated peace with Germany, but not for sedition.

Similarly, if some people peacefully oppose government’s decision to go to war or an ongoing war with Pakistan for whatever reasons, their opposition would not be sedition, even if they are dubbed unpatriotic or some such. However, if the government had introduced conscription by law and someone wilfully refused to be drafted or obey some other lawful order, he would be guilty of violating that law, but still not guilty of sedition. That is how the Supreme Court in the US had, in Holmes v. United States, denied relief to a Jehovah’s Witnesses minister who, though classified as a conscientious objector, refused to take part in even ‘civilian work’ programmes.

With this knowledge, it should be clear that threatening someone shouting ‘azaadi’ slogans, like the ones that used to be raised in Kashmir, with treason is simply ridiculous. Accusations of speaking ‘Pakistan’s language’ are even more puerile. In April 2015, the J&K High Court Bar Association president Mian Abdul Qayoom had deposed before the high court that he was not a citizen of India and did not believe in its constitution. Although Qayoom had earlier been detained under the PSA in 1990, 2010 and 2016, he was not charged for saying “I am not an Indian”. It means that the high court did not think that it infringed on any law, not to speak of sedition.

Is there any merit in the accusations of ‘tukde-tukde gang’?

Even as the home ministry has admitted in response to an RTI query that it has no information concerning the ‘tukde-tukde gang’, the phrase continues to fly thick and fast. The legal position is that merely wishing ill for India or its people, however repugnant to many, would not be sedition. If some people pray for India to be disintegrated (Bharat tere tukde honge types), devastated in a nuclear war or by natural disasters and pestilences, etc. it would be in very bad taste; they would still not attract sedition. It could call for a social boycott or ostracisation, but not prosecution.

The Supreme Court held in the case of Balwant Singh and Anr v. State of Punjab (1995) that shouting slogans like Khalistan zindabad was not sedition. This was in spite of the fact that the incident happened on the day of the assassination of Indira Gandhi. The Punjab and Haryana high court reiterated this in the cases of Simranjit Singh Mann v. State of Punjab, Gurjatinder Pal Singh v. State of Punjab (2009) and Kashmir Singh & Ors v. State of Punjab (2009). In Alavi v. State of Kerala (1982), the Kerala high court had held, “Criticising the present judicial set up or functioning of the Parliament or Legislative Assemblies cannot be considered as bringing into hatred or contempt or exciting or attempting to excite disaffection towards the Government established by law.”

A documentary film on Kashmir titled The Textures of Loss had statements like “I beg Allah that this kind of an India be damned that the whole of this India be damned and of our Government here and all their families like they’ve ruined our whole family”. In the case of Central Board of Film Certification & Another v. Pankaj Butalia & Another (2016), the Delhi high court held that excision of that and similar lines by the Censor Board and the Appellate Tribunal was wrong.

Legally, who can be called an anti-national?

When industrialist Rahul Bajaj spoke about people in India being fearful of speaking against the government, he was criticised for “spreading one’s own impressions which, on gaining traction, can hurt national interest”. Now, the question is who has defined national interest in the first place and where it lies. Does the party in power want to tell that it has a monopoly over defining national interest? Moreover, one can spread his own impressions only and it would be none of his mistake if they gain traction. There is no law that only the nuggets of wisdom of WhatsApp University can be spread and only they are allowed to gain traction.

In the case of Priya Parameswaran Pillai v. Union of India & Others (2015), a look-out circular (LOC) was issued against Pillai, a Greenpeace activist working for tribal communities, allegedly for indulging in anti-national activities. The Delhi high court held that espousing a cause of particular section of people could not be considered anti-national or creating disaffection amongst people at large. The court also pointed out that the expression, ‘anti-national’ or ‘national interest’ is not mentioned in Article 19(2) of the constitution. Hence, an office memorandum which forms the basis of issuing the LOCs, speaking of ‘anti-national elements, etc. in larger national interest’, does not qualify as a ‘reasonable restriction’ within the meaning of Article 19(2) of the constitution.

The court further said that contrarian views held by a section of people on the tradition and heritage of the nation and the manner, in which they are to be taken forward, could not be used to describe such section or class of people as anti-national. For anti-national activities to be brought within the limitation of Article 19(2), it would have to have a close nexus with the security of the state. Security of the state, as defined by the Supreme Court in Romesh Thappar v. The State of Madras, can only be an ‘aggravated form of prejudicial activities’ which endangers the very existence of the state or in the very least, threatens the life and limb of its citizens. The court held that if the logic of the government were to be accepted, it would result in conferring un-canalised and arbitrary power in the executive, which could, based on its subjective view, portray any activity as anti-national.

Disregarding judicial pronouncements of our own apex court and high courts is not just illegal, it is making us the laughing stock of the world. One hopes saner counsel prevails.