“My presence in parliament will be an opportunity to project the views of the judiciary before the legislature and vice versa," the former chief justice of India had said. So what exactly has he projected? 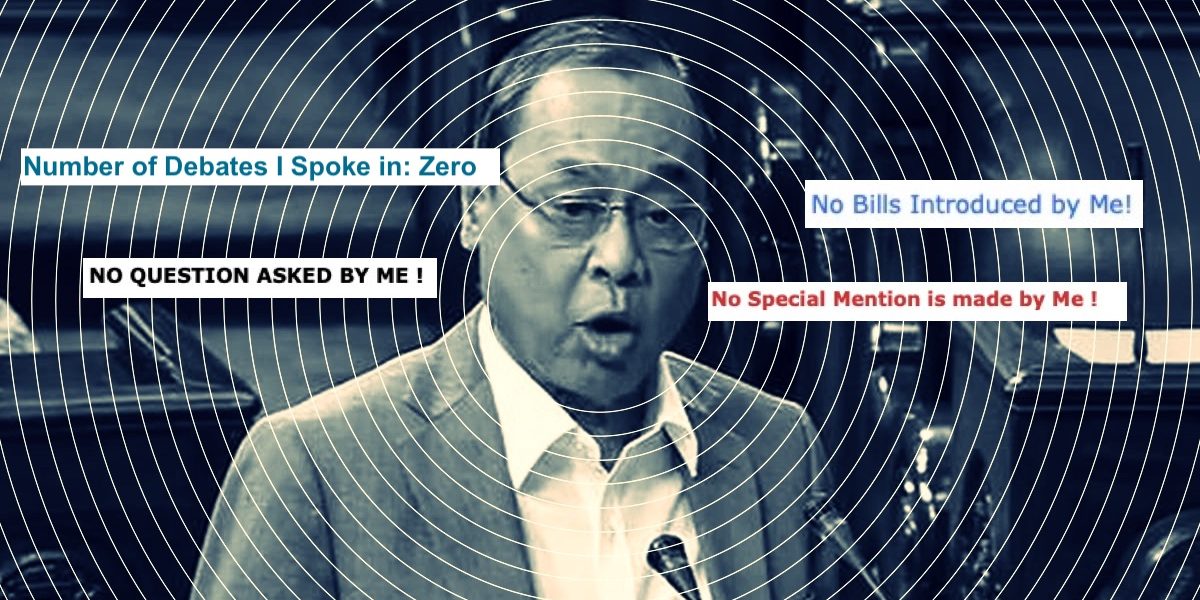 This time last year, on March 19, 2020, Ranjan Gogoi, the former chief justice of India, took his oath as a member of the Rajya Sabha after being nominated by the government.

His oath taking ceremony was disrupted by the slogans of opposition members, who alleged that his nomination infringed upon the constitutional scheme of separation of powers between the executive and judiciary. Members of the legal fraternity and public intellects raised concerns to as whether this nomination would be seen as a post-retirement reward for the former CJI, whose handling of cases came under fire for the restrictive approach to individual liberty, and whose leadership of the court has led to the claim that the judiciary has failed to discharge its role in stopping the ongoing democratic backslide in India.

A major source of the challenge to the Supreme Court’s credibility in recent times is the manner in which it dragged its feet on the numerous habeas corpus cases arising from the erstwhile state of Jammu and Kashmir after hundreds of people, including the former chief ministers and senior politicians, were illegally detained by the government following the abrogation of Article 370 of the Constitution.

One of the habeas corpus petitions which came before the Supreme Court was filed by Communist Party of India (Marxist) leader Sitaram Yechury, after a former party legislator was detained in Jammu and Kashmir. Instead of testing the basis for the detention of the MLA, Gogoi a CJI allowed Yechury to visit the MLA on the ground that he should not engage in any political activities during his visit and that he should report back to the court. The order was akin to the dictate of the executive.

The constitutional scholar Gautam Bhatia points to the instrumental role played by Chief Justice Gogoi in the Supreme Court’s decision to take over the implementation process of the NRC. This in effect left those adversely affected by the NRC remediless, because the legitimacy of the NRC process was coming directly from the orders of the highest court of the land. As Bhatia succinctly concludes “under his tenure, the Supreme Court has gone from an institution that – for all its patchy history – was at least formally committed to the protection of individual rights as its primary task, to an institution that speaks the language of the executive, and has become indistinguishable from the executive.”

Nevertheless, despite the criticism he faced as CJI, Gogoi proceeded to accept the Narendra Modi government’s offer to nominate him to the Rajya Sabha. While justifying his acceptance of the nomination, Gogoi said:

“My presence in parliament will be an opportunity to project the views of the judiciary before the legislature and vice versa,”

In a television interview, he said:

“My acceptance of the nomination stems from a firm belief that when the president requests for your services, you don’t say no.”

Article 80 (1)(a) read with clause 3 of the Constitution of India empowers the president to nominate 12 members to the Rajya Sabha, having special knowledge or practical experience in fields such as social science, art, literature and science. While participating in the constituent assembly debates on July 28, 1947, N. Gopalswami Ayyangar justified the nomination of eminent persons as members of the Rajya Sabha on the ground that they will contribute to the parliamentary debates with their expertise, even though they may not be part of the political fray.

Therefore, a nominated member, more than any ordinary member, is expected to raise the bar of parliamentary debates by presenting their views on policies and Bills, which may come within their domain of expertise. A former chief justice has a unique ability to contribute to debates on Bills, as nearly every major enactment raises important legal questions.

However, according to the records of the Rajya Sabha as published on its website as of March 20, 2021, Ranjan Gogoi has not participated in a single debate concerning a Bill since taking oath as an MP. 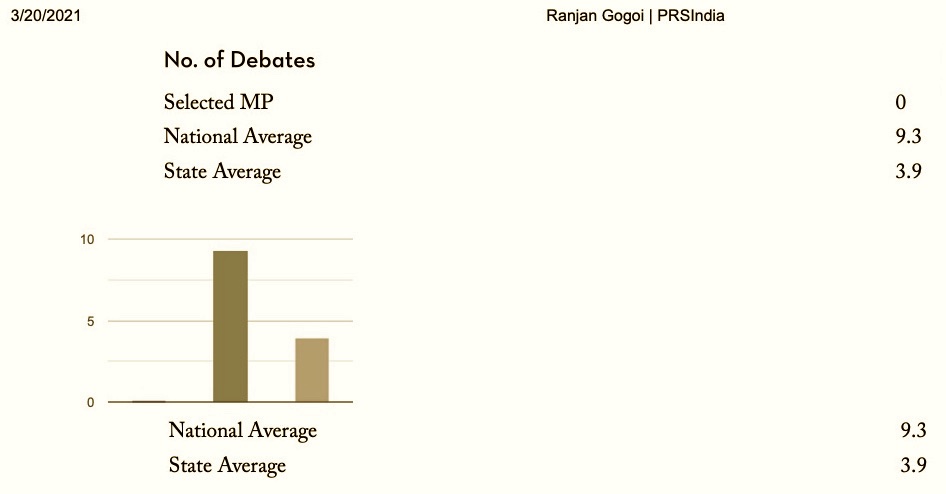 Ranjan Gogoi has not participated in any debates in the Rajya Sabha in the one year he has been a nominated MP. Source: PRS India

In the last one year, parliament has handled several contentious Bills, the prime ones were the three Farm Bills. An important question raised in the debates concerning the Bills, was whether the legislation was outside the constitutional purview of the Centre, since agriculture is a state subject. It would have been useful for parliament to hear the former CJI’s analysis on this question, yet Ranjan Gogoi preferred not to participate in the proceedings.

Members of Parliament also have the power to introduce private Bills of their own. However, preparing a good Bill is no easy task, it requires extensive knowledge of laws in order to ensure that it is not in derogation of other statutes and it requires a comprehensive understanding of the constitution to ensure that the Bill is not ultra vires to it. The process also requires excellent legal drafting skills to produce concise and appropriate statutory language to appropriately capture the proposed principles. A former Chief Justice of India has a unique advantage in all these fields compared to the average Parliamentarian. However, Justice Gogoi has not introduced a single Bill in the Rajya Sabha.

Ranjan Gogoi has not introduced any Bill in the Rajya Sabha in the one year he has been a nominated MP. Source: Rajya Sabha website

Members of Parliament are also expected to hold the government accountable by posing questions to the ministers on matters concerning administration. These can be in the form of an unstarred question to which a minister must provide a written answer, or in the form of a starred question to which a minister must provide an oral reply on the floor of the house. MPs submit questions after closely scrutinising existing government policy, which requires the ability to marshal a wide range of facts in the field of law, economics, technology, foreign policy and much more. Yet, despite his erudite background, Ranjan Gogoi has not raised a single question in the Rajya Sabha.

Ranjan Gogoi has not asked any questions in the Rajya Sabha in the one year he has been a nominated MP. Source: Rajya Sabha website

MPs also have the ability to raise interventions in parliament, in order to draw the attention of the government to any particular problem with policy implementation or gaps in administration. In the Rajya Sabha, these are usually listed ‘Special Mentions.’ However, even on this front, there are no records which show any special mentions by the former CJI.

Ranjan Gogoi has not made any special mentions in the Rajya Sabha in the one year he has been a nominated MP. Source: Rajya Sabha website

As per the Rajya Sabha website, the house met for 34 days in the budget Session from January 31, 2020 till April 3, 2020, and Gogoi attended the session only on March 19 ad 20, 2020 – the day he was sworn in and the day after. In the monsoon session, the Rajya Sabha met for 18 days, but during this period, Gogoi did not attend any sittings of the house. For the current budget session, as of March 20, 2021, the Rajya Sabha had met for 33 days, although Gogoi has attended only one sitting, on February 12, 2021.

Details of Ranjan Gogoi’s attendance record for the 2020 budget session, the 2020 monsoon session and the 2021 budget sessioon, as noted on the Rajya Sabha website.

Ironically, the most visible and audible contribution made by Justice Gogoi’s presence in parliament came when a Lok Sabha MP, Mahua Moitra of the Trinamool Congress, referred to the sexual harassment charges against the former CJI, prompting strenuous but ultimately unsuccessful efforts by BJP MPs to have the references struck off the record.

Justice Gogoi as CJI often resorted to ‘sealed cover’ jurisprudence, allowing the government to submit information in sealed covers to the court, without copies being provided to the corresponding party, thereby going against the principle of transparency associated with a public court proceeding.

In accepting the government’s nomination to the Rajya Sabha, Justice Gogoi said that it would be an opportunity for him to provide his services to parliament. So what are these services of Parliamentarian Gogoi? Perhaps the answer lies in a sealed cover.

Arvind Kurian Abraham is a lawyer specialising in constitutional law and a graduate of Harvard Law School.