The sitting judge has reportedly suggested that the panel would damage the apex court's credibility if it continued to investigate the sexual harassment allegation ex parte, without the participation of the woman who complained.

New Delhi: If the terse denial issued by the Supreme Court secretary general was meant to refute reports of some judges feeling uneasy about the manner in which the court is handling sexual harassment allegations against Chief Justice Ranjan Gogoi, its carefully chosen words will likely have the opposite effect.

On Sunday, the Indian Express reported that Justice D.Y. Chandrachud had urged the in-house committee probing the complaint of a former court employee against the CJI to not proceed with the inquiry ex-parte as it could damage the court’s reputation. The story was filed by Sushant Singh, a reporter with an excellent record of covering the inside track at the court.

The committee is headed by Justice S.A. Bobde and also comprises Justice Indu Malhotra and Indira Banerjee. The complainant withdrew from the panel’s proceedings on May 1, accusing it of lack of sensitivity.

Justice Chandrachud’s letter was handed over on May 2, the Indian Express reported.

The same story also claimed that Justice Chandrachud, along with Justice Rohinton Nariman, met with the in-house inquiry committee on Friday evening (i.e.May 3).

On Sunday morning, the Supreme Court issued a press release in the name of its secretary general which took note of the Indian Express story but denied only the claim that two judges had met the Bobde panel on May 3:

“It is most unfortunate that a leading newspaper has chosen to state that Justice R.F. Nariman and Justice D.Y. Chandrachud together met Justice S.A. Bobde on Friday evening i.e on 3rd May 2019. This is wholly incorrect. The in-house committee which is deliberating on the issue concerning [the] Hon’ble Chief Justice of India deliberates on its own without any input from any other Hon’ble judge of this Court.”

However, the press release does not refute the claim that Justice Chandrachud wrote a letter to the three judges. The wording of the press release leaves open the possibility that one or more judges might have met the committee members individually and conveyed their views, even as it asserts that the “in-house committee… deliberates on its own without any input” from other judges.

According to the Indian Express, Justice Chandrachud noted in his letter to the three judges in the probe committee that the Supreme Court would damage its credibility if the panel continued with its probe in the absence of the complainant. He also reportedly suggested that the panel could either accede to the complainant’s request that she be allowed a lawyer or appoint an amicus curiae for the probe.

Justice Chandrachud is currently tenth in the list of seniority, while Justice Nariman is fifth in the list and also a member of the Supreme Court’s collegium.

The complainant, a former Supreme Court employee, said on May 1 that she would no longer participate in any further hearings of the in-house committee. In her letter to the committee and in a media statement, she said she found the committee “intimidating,” the power-ratio “imbalanced,” and the treatment of her complaint “insensitive.”

Before announcing her decision to not participate any further, the 35-year-old woman had already appeared before the inquiry committee twice – on April 26 and April 29. She appeared before the panel for the third time on April 30, when she walked out due to “to serious concerns and reservations”.

The committee, meanwhile, decided to proceed with the inquiry ex-parte.

On May 2, Chief Justice Ranjan Gogoi appeared before the in-house house committee. This was reportedly the first time in the history of the Indian judiciary that a CJI appeared before a committee over allegations of sexual harassment.

The former junior assistant said that she was “compelled to walk out” of the three-member committee’s proceedings on Tuesday because the judges who are part of it did not seem to appreciate the fact that “this was not an ordinary complaint but was a complaint of sexual harassment against a sitting CJI” and refused to allow her to be accompanied by a lawyer or support person during her deposition. 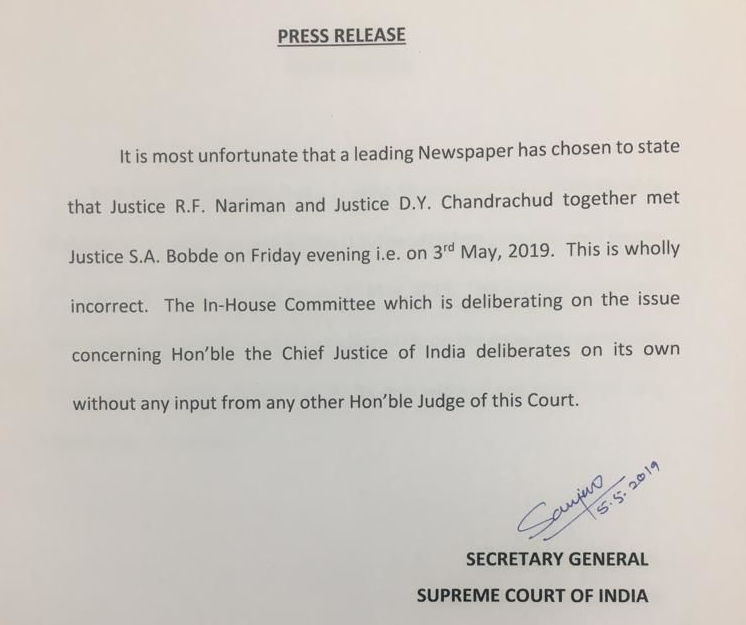