Will You Keep Sedition Law on Hold During Your 'Review', Supreme Court Asks Union Government

The Centre has said it has decided to "re-examine and reconsider" the sedition law by an appropriate forum. 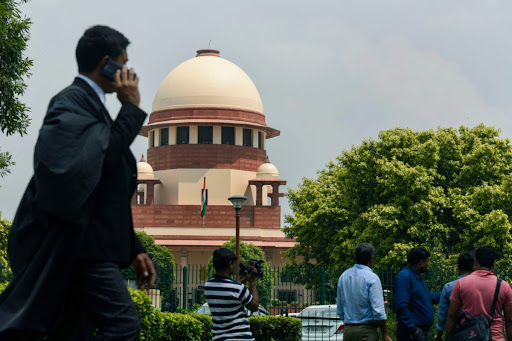 New Delhi: The Supreme Court on Tuesday asked the Centre make clear its views on the issue of protection of interests of citizens till the colonial-era penal law on sedition is reconsidered by an appropriate forum.

A bench headed by Chief Justice N.V. Ramana took note of the Centre’s  submissions in which it said it has decided to “re-examine and reconsider” the sedition law by “an appropriate forum” and sought a response to the bench’s suggestion that the filing of sedition cases in future be kept in abeyance till re-examination.

“The filing of FIRs and investigation are done by State Govts. Centre does not do”, solicitor general Tushar Mehta, appearing for the Centre, said. In fact, the Delhi Police – which reports to the Union ministry for home affairs, filed sedition cases against several journalists last year, including Mrinal Pande and Rajdeep Sardesai.

Mehta said that he would take instructions from the government and apprise the bench on Wednesday.

“We are making it very clear. We want instructions. We will give you time till tomorrow. Our specific queries are: one about pending cases and the second, as to how the government will take care of future cases…” the bench responded.

“In order to protect the interest of people who are already booked under the sedition law as well as future cases, Centre to file response on whether those can be kept in abeyance till law is re-examined,” the chief justice directed.

The Union Ministry of Home Affairs in an affidavit filed before the apex court on Tuesday said the decision was in tune with the views of Prime Minister Narendra Modi on shedding colonial baggage , noting he has been in favour of the protection of civil liberties and respect of human rights and in that spirit, over 1,500 outdated laws and over 25,000 compliance burdens have been scrapped.

The top court has been hearing a clutch of pleas challenging the validity of the law on sedition which has been under intense public scrutiny for its alleged misuse to settle political scores by various governments.

Concerned over the enormous misuse of the penal law on sedition, the top court in July last year had asked the Centre why it was not repealing the provision used by the British to silence people like Mahatma Gandhi to suppress the freedom movement.

Agreeing to examine the pleas filed by the Editors Guild of India, former Major General S.G. Vombatkere and Trinamool Congress MP Mahua Moitra, challenging the constitutionality of Section 124A (sedition) in the IPC, the apex court had said its main concern was the “misuse of law” leading to the rise in the number of cases.

The non-bailable provision makes any speech or expression that brings or attempts to bring into hatred or contempt or excites or attempts to excite disaffection towards the government established by law in India a criminal offence punishable with a maximum sentence of life imprisonment.

While issuing notice on the petitions in July last year, the top court had referred to the alleged misuse of the provision and had asked if the colonial-era law was still needed after 75 years of Independence.

“This dispute about the law is concerning. It is a colonial law. It was meant to suppress the freedom movement. The same law was used by the British to silence Mahatma Gandhi, Tilak, etc. Still, is it necessary after 75 years of Independence?” the CJI had asked.