Sahara-Birla Pay-Off Case: Did Justice Khehar Recuse Himself on December 16?

The hearing for the case was rescheduled in light of a conflict of interest because the case implicates Prime Minister Modi while Khehar’s appointment as chief justice lay in his hands. 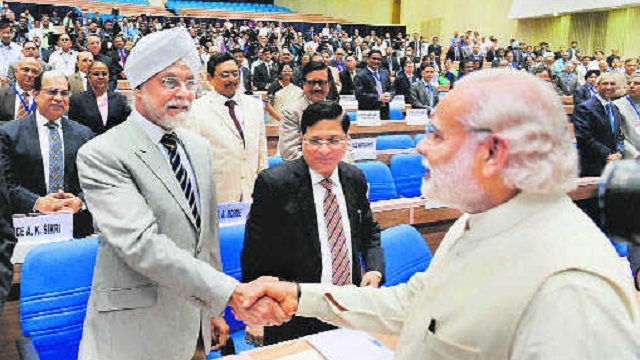 The hearing of the Sahara-Birla pay-off case in the Supreme Court on December 16 is an instance of how court proceedings should not be reported.

Media reports on the hearing were as inaccurate as the inferences drawn by the spokespersons of the BJP and the government. The latter suggested that the court had, in previous hearings, dismissed the evidence submitted by the petitioners seeking directions for an impartial probe into the allegations.

The reality is more complex and nuanced.

The bench, comprising justices J.S. Khehar and Arun Mishra, did point out in the earlier hearings that the evidence submitted by Prashan Bhushan – who represents the petitioner, Common Cause – was inadequate to grant the requested probe and that giving the petitioners more time to submit additional evidence might make the court look partial. But the bench did finally accept the petitioner’s prayer for a brief adjournment till Justice Khehar takes charge as chief justice.

Just as it would be incorrect to suggest that the bench let its initial reservations about the inadequacy of the evidence influence its hearing of the merits of the plea for an impartial probe, the media was completely wrong in reporting the proceedings of December 16.

Reports in the media suggested that the petitioner’s counsel, Prashant Bhushan sought Justice Khehar’s recusal, or that Justice Khehar himself recused from hearing the case further. This was in view of Bhushan raising the impropriety of Justice Khehar hearing the matter when the file relating to his appointment as chief justice was pending with the prime minister – who was allegedly one of the beneficiaries of the pay-off, when he was the Gujarat chief minister.

It is true that Justice Khehar was initially peeved with Bhushan’s belated suggestion – because he did not raise this issue of impropriety in previous hearings. He, therefore, thought the counsel was requesting his recusal and thus was reluctant to hear the matter further. His colleague on the bench, Justice Arun Mishra and attorney general Mukul Rohatgi opposed the reason cited for the brief adjournment.

But when Bhushan clarified that he was not against Justice Khehar hearing the matter, but was only raising the possible perception by the public of impropriety if he heard it before his appointment as CJI, the bench understood that the options before it were limited. If the attorney general was against granting more time to Bhushan to submit evidence which would pass the threshold test posed by the bench, then there was no option for Justice Khehar but to recuse from hearing it before his appointment as the CJI.

If, on the contrary, the attorney general could agree to a brief adjournment till Justice Khehar becomes the chief justice, then the matter could be listed on another date for hearing after January 4, when he would be sworn-in as the CJI.

Fortunately for the bench, the AG reluctantly agreed for a brief adjournment till January 11, and Justice Khehar avoided the embarrassment of explaining why he recused or did not recuse from hearing the matter.

Indeed, neither the bench, nor the parties to the case, used the word ‘recuse’ that day, although Bhushan’s request for a brief adjournment and Justice Khehar’s initial reluctance to hear the matter were interpreted as a plea for recusal. The order, dictated by Justice Khehar, after the hearing, was also silent on the so-called recusal plea and its acceptance or refusal by the judge or bench. It simply said, “Post it for January 11, 2017”.

Reasons for recusal and its refusal

However, this is not to deny that Justice Khehar contemplated recusal on December 16.  He did consider recusal when he suggested to the AG that they could consult Chief Justice T.S.Thakur at 3.30 pm that day to request the matter’s listing before another bench. Justice Khehar clearly felt that the reasons for his recusal were justified.

In his judgment in the NJAC case in 2015, Justice Khehar held as follows:

“A judge may recuse on his own, from a case entrusted to him by the chief justice. That would be a matter of his own choosing. But recusal at the asking of a litigating party, unless justified, must never be acceded to.  For that would give the impression, of the judge had been scared out of the case, just by the force of the objection.  A judge before he assumes his office, takes an oath to discharge his duties without fear or favour.  He would breach his oath of office, if he accepts a prayer for recusal, unless justified.  It is my duty to discharge my responsibility with absolute earnestness and sincerity”.

Justice Khehar said so, while refusing to recuse from hearing the NJAC case. The petitioners’ counsel, Fali S. Nariman, had asked for his recusal because of his membership of the Supreme Court’s collegium comprising the chief justice and four senior-most judges. Nariman’s contention was that Justice Khehar’s hearing of the case would leave the impression that he would be biased in favour of the collegium because of his membership in it.

In contrast, Justice Khehar’s readiness to accept the plea for his recusal, if the Sahara-Birla pay-off case was to be heard before his appointment as the CJI, was significant.

Justice Khehar’s action shows that a judge ought to give reasons for his non-recusal from hearing a matter on the plea of a party – but he needs to give no reasons for accepting it as the reasons are obvious in the plea itself, unless they are not so apparent.

Justice Khehar’s colleagues on the constitution bench, which heard the NJAC case, however, made a few additional points on recusal by judges. Justice Madan B. Lokur held that  some procedural and substantive rules should be framed in order to avoid embarrassment to other judges on the bench when a plea for recusal is made or accepted in a given case.

Justice Lokur felt that giving reasons for recusal is fraught with some difficulties. What if a high court judge gives reasons for recusal and it is contested in the Supreme Court, which finds the reasons frivolous and sets it aside? Justice Lokur had asked if the Supreme Court  can pass a consequential order requiring the judge to hear the case, even though he or she genuinely believes that he or she should not hear the case.

Justice Kurian Joseph, on the contrary, held that it is only proper that the judge discharging high and noble duties, at least broadly indicate the reasons for recusing from the case, so that the litigants or the well-meaning public may not entertain any misunderstanding that the recusal was for altogether irrelevant reasons. Once the reasons for recusal are indicated, there will not be any room for attributing any motive for the recusal, Justice Joseph observed. It is the constitutional duty, as reflected in one’s oath, to be transparent and accountable and hence a judge is required to indicate reasons for his recusal from  a particular case. This would help to curb the tendency for forum shopping, Justice Joseph said in his concurrent judgment.

Justice Joseph, however, added that the reasons are required to be indicated broadly.  “Of course, in case the disclosure of the reasons is likely to affect prejudicially any case or cause or interest of someone else, the judge is free to state that on account of personal reasons, which the judge does not want to disclose, he has decided to recuse himself from hearing the case”, Justice Joseph wrote in that judgment.

This year’s data on recusals

Observers say that in most cases, judges might have recused from hearing them because they dealt with them either as counsel or as high court judges or chief justices – and propriety demands that they refrain from hearing them as Supreme Court judges. But, as Justice Kurian Joseph would ask, should not the reasons be disclosed to the litigating public?