Recap: Why RBI Board Members Were Not Impressed by Explanations for Demonetisation

A constitution bench of the Supreme Court is due to hear the matter on Thursday. In its affidavit, the Union government repeated most of the grounds it had presented before the Central Board of RBI on November 8, 2016. 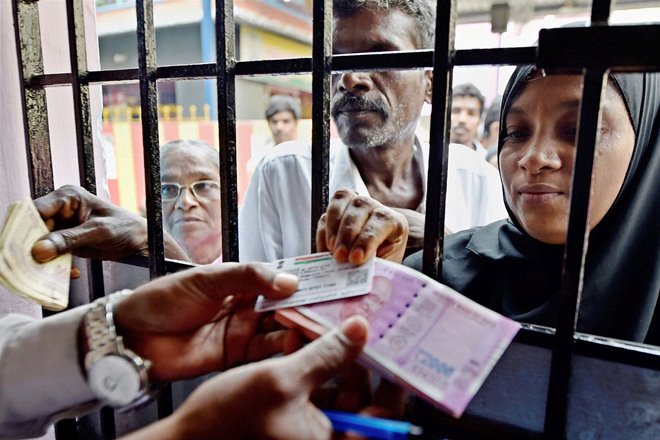 New Delhi: Defending its 2016 move to demonetise currency notes of Rs 500 and Rs 1,000 denomination, the Narendra Modi government last week submitted in an affidavit to the Supreme Court that it was a “well-considered” decision taken after extensive consultation with the Reserve Bank of India (RBI). But a look at the minutes of the meeting of the Central Board of Directors of the RBI held hours before the decision was announced by the PM on November 8 has revealed otherwise.

The Union government filed the affidavit in response to a batch of 58 petitions that had challenged demonetisation. On December 16, 2016, a bench headed by then Chief Justice T.S. Thakur had referred the question of the validity of the decision and other related matters to a larger bench of five judges. A five-judge constitution bench comprising Justices S.A. Nazeer, B.R. Gavai, A.S. Bopanna, V. Ramasubramanian, and B.V. Nagarathna will now hear the matter again on Thursday, November 24.

The affidavit claimed that the RBI also proposed a draft scheme for the implementation of the recommendation. “The recommendation and the draft scheme were duly considered by the Central Government and, based on that, the Notification was published in the Gazette of India declaring that the specified bank notes shall cease to be legal tender,” it says.

Also Read: Demonetisation Back in Focus After Union Govt’s Affidavit. Here’s How it Undermined Democracy.

Was RBI aware of demonetisation discussions?

However, according to RTI activist Venkatesh Nayak, who accessed the minutes of the 561st Meeting of the Central Board of Directors of the RBI through a Right to Information (RTI) application, “the language of Para 4.4 of the minutes seems to indicate that the Board was simply not aware of this planning prior to the tabling of the Deputy Governor’s memorandum on the subject at its meeting less than six hours before the prime minister announced the decision to the country.”

A reading of the concerned paragraph reveals as much. It states: “The Board was assured that the matter has been under discussion between the Central Government and RBI over the last six months during which most of these issues have been considered. Apart from the stated objectives, the proposed step also presents a big opportunity to take the process of financial inclusion and incentivising use of electronic modes of payment forward as people see the benefits of bank accounts and electronic means of payment over use of cash. (sic)”

So, the minutes clearly provide that the Board was only “assured” that the matter had been under discussion between the Union government and the RBI.

The government also submitted to the Supreme Court that “the withdrawal of the legal tender character of the specified bank notes was by itself an effective measure and was also a part of a larger strategy for combating the menace of fake money, terror financing, black money and tax evasion, but not confined to them alone.”

RBI board said most black money held not in cash, but in assets

Nayak, while working for the Commonwealth Human Rights Initiative (CHRI), has pursued the demonetisation process and its consequence extensively through RTIs. He noted that the RBI’s directors had – contrary to the government’s stand – opined that most of the black money is not held as cash but in the form of assets such as gold or real estate. Demonetisation, they said, would not have any material impact on those assets.

In fact, the minutes in Para 4.3 (vi) quote them as saying: “Most of the black money is held not in the form of cash but in the form of real-sector assets such as gold or real-estate and that this move would not have a material impact on those assets.”

Para 4.3 (v) of the minutes said while any incidence of counterfeiting is a concern, “Rs 400 crore as a percentage of the total quantum of currency in circulation in the country is not very significant.”

What were the compelling factors?

In light of these facts, Nayak asked “what were the compelling factors that justified DeMon which took the lives of more than a hundred citizens who stood outside banks to exchange their currency notes and scores of bankers who collapsed counting them and have had well documented negative impact on various sectors of the economy which is still unravelling?” He said the minutes of the meeting of the RBI’s Central Board of Directors was “strangely silent on this matter”.

Nayak had earlier mentioned these aspects in his blog.

The directors had also observed that demonetisation is a “commendable measure” but will have a “short-term negative effect on the GDP for the current year”.

The minutes had also recorded that “Deputy Governor’s memorandum recommending withdrawal of legal tender status of banknotes in the denomination of Rs. 500 and Rs. 1,000 of existing and any older series in circulation, along with a copy of letter no. F.No.-10/03/2016-Cy.I dated November 7, 2016 received from Ministry of Finance, Government of India and ‘Draft Scheme for Implementing the Withdrawal of Legal Tender Character of Existing Rs. 500 and Rs. 1000 Bank Notes’, was submitted to the Central Board for consideration and commending for forwarding the same to the Central Government in terms of Section 26(2) of the Reserve Bank of India Act, 1934.”

With regard to this aspect, the minutes said, the directors observed that “the growth rate of economy mentioned is the real rate while the growth in currency in circulation is nominal. Adjusted for inflation, the difference may not be so stark. Hence, this argument does not adequately support the recommendation.”