That the HC did not follow the SC order as precedent shows that it does not have sufficient confidence in the ability of the Vijay Rupani government to exercise the caution needed for the festival at this time. 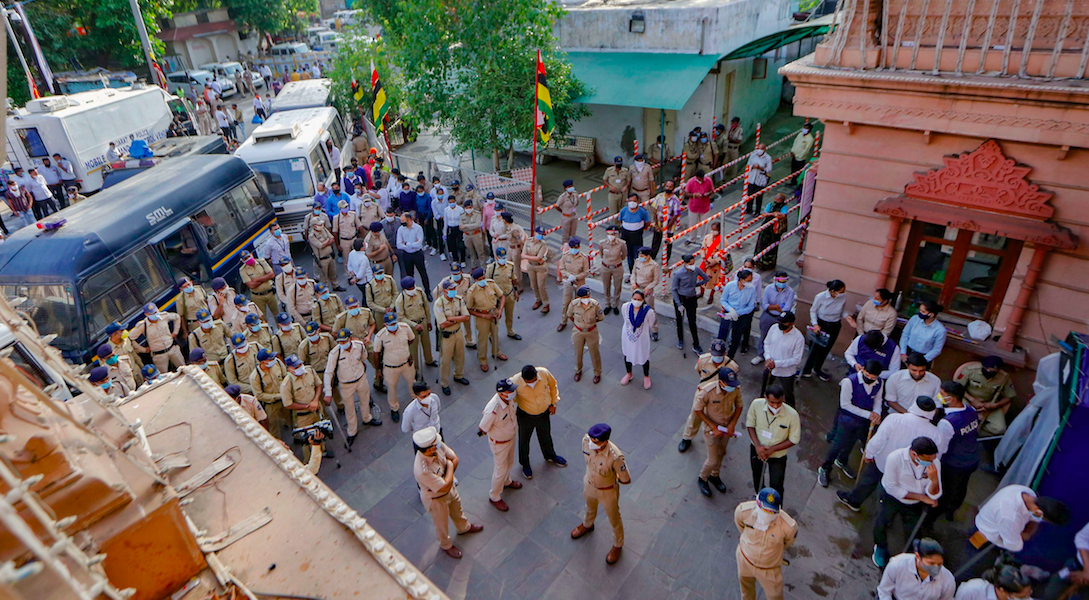 Police deployed at the main gate of the Jagannath temple as the annual Rath Yatra is held inside, in Ahmedabad, Tuesday, June 23, 2020. Photo: PTI

Monday’s Supreme Court order lifting the stay on Puri’s Rath Yatra is silent on whether it can be used as a precedent for permitting, with similar conditions, religious gatherings elsewhere.

Though the Supreme Court had made it clear during the hearing that it was hearing applications to allow the Rath Yatra at Puri alone, and not in the rest of the state, its silence in the final order regarding its applicability elsewhere had led to doubts.

The Gujarat high court, at a special hearing in the early hours of Tuesday, took note of the Supreme Court’s order uploaded on Monday night, but refused to use it as a precedent for permitting the Rath Yatra in Ahmedabad – also scheduled to start on Tuesday.

The bench of the Chief Justice Vikram Nath and Justice J.B. Pardiwala heard the state government’s application to lift the stay imposed by it on June 20, following the Supreme Court’s ban on the Puri Rath Yatra imposed on June 18.

The high court bench recalled that in its June 20 order, it had mentioned two grounds for staying the procession of the Rath Yatra: one, the condition of Ahmedabad on account of crisis of COVID-19 and second, the order passed by the Supreme Court on June 18 restraining the Rath Yatra at Puri and in the entire state of Odisha.

Also read: SC Explains Why It Changed Its Mind on Rath Yatra Despite COVID-19 Fears

On Tuesday morning, the bench took note of the Supreme Court’s order on Monday, permitting the Rath Yatra at Puri, but added that the situation in Ahmedabad  on account of COVID-19  cannot be compared with that in Puri or the state of Odisha.

“Despite the fact that assurance being given by the State and all other applicants we still do not find any good ground to recall or modify our order dated 20.06.2020. All the Civil Applications are accordingly rejected. We make it clear that on account of paucity of time and the urgency of the order being made available to the parties, we have not dealt with the reasons in detail,” the bench stated in its order. 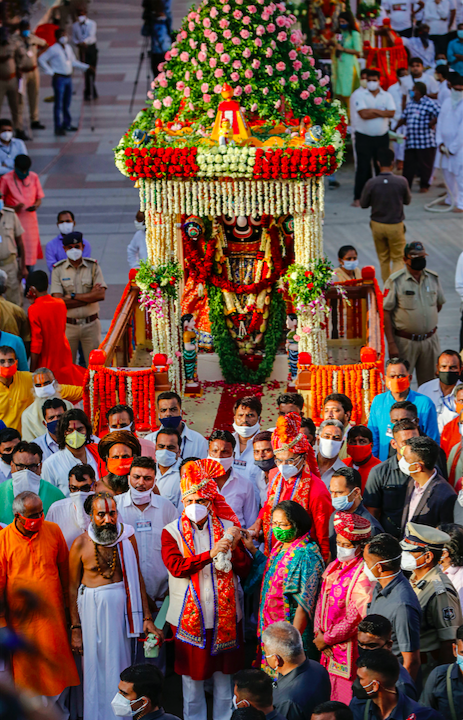 Gujarat Chief Minister Vijay Rupani arrives at Lord Jagannath temple for rituals during 143rd annual Rath Yatra, being held inside the temple premises due to the coronavirus outbreak, in Ahmedabad, Tuesday, June 23, 2020.

The Gujarat high court’s refusal to follow the Supreme Court’s order as a precedent shows that it does not have sufficient confidence in the ability of the state government to take the requisite care and caution to avoid the spread of the pandemic, in case the Rath Yatra is allowed with conditions.

In the case of Odisha, the Supreme Court observed in its order, released on Monday, that the state has a good record of having controlled the pandemic with a very little loss of life. “We see no reason why the same attitude of care and caution should not be applied to the Rath Yatra,” the Supreme Court bench of the Chief Justice of India S.A. Bobde and Justices Dinesh Maheshwari and A.S. Bopanna had added.

According to reports, a symbolic Rath Yatra was organised in the Lord Jagannath temple premises in Ahmedabad on Tuesday morning, following the high court’s refusal to permit the public procession.

The chief minister, Vijay Rupani performed “Pahind Vidhi,” a ritual of cleaning the road with a golden broom, for the chariots to embark on their journey.  After this, the three chariots (one for Lord Jagannath, and the other two for his sister, Subhadra and brother, Balaram) began a symbolic yatra within the premises of the temple in Jamalpur area of Ahmedabad.

On June 20, the high court had permitted the three chariots to make a symbolic yatra on the shortest possible route without involvement of anyone from the

The Gujarat high court’s order on Tuesday makes it clear that the Supreme Court’s order on Puri Rath Yatra cannot be binding in the case of all religious gatherings, and the factual matrix of Puri must make it distinct from others.

It is true that the Supreme Court’s order on Monday left sufficient room for interpretation that there can be no convincing reasons for not permitting similar religious gatherings with conditions, as the court had done in the case of Puri Rath Yatra. For want of time, the Gujarat high court had not immediately articulated convincing reasons for not permitting the Ahmedabad Rath Yatra on the lines of Puri Rath Yatra, although it pointed to the alarming rise in COVID-19 cases in Ahmedabad.

The Gujarat government, therefore, has to introspect on why it could not convince the high court, as the Odisha government had done before the Supreme Court in the case of Puri Rath Yatra.

In a sense, the Gujarat government’s effort to take refuge under the Supreme Court’s order permitting Puri Rath Yatra is akin to what the Tamil Nadu government did while denying default bail to an accused citing the Supreme Court’s suo motu order, issued on March 23 extending limitation period for filing documents in courts, following difficulties in accessing the court on account of the spread of COVID-19.

The Tamil Nadu police argued that the 90-day stipulated period for filing charge sheets by the police stood extended too in terms of the Supreme Court’s order. Therefore, CrPC provisions enabling default bail to an accused would be inoperative during the lockdown, in case the police could not complete their investigation and file their reports within the stipulated period of 90 days, the Tamil Nadu police claimed.

While disagreeing with Tamil Nadu government’s contention that the accused who are in judicial custody could not claim default bail during the nationwide lockdown, Justice G.R. Swaminathan of the Madurai bench of the Madras high court observed in Settu v. The State on May 8: “The executive must exhibit nimble footwork and not hide behind judicial orders.  Only little children hide behind saree end of their mothers”.

On June 19, the Supreme Court bench of three judges agreed with Justice Swaminathan by setting aside another order of the single judge of the Madurai Bench of the Madras high court which had denied default bail to an accused during the lockdown.

The Supreme Court also disapproved the conduct of that single judge, Justice G. Jayachandran, for his description of Justice Swaminathan’s ‘saree end’ metaphor to describe the executive’s action in erroneously taking refuge under a Supreme Court’s order  as “uncharitable”.