Gogoi as MP: 'A Matter of Great Public Importance Touching Upon Judiciary's Independence'

The Modi government's decision to nominate Gogoi to the Rajya Sabha is a scandal because as CJI, he presided over – or allocated to benches that he chose – key political cases in which the government was a party. 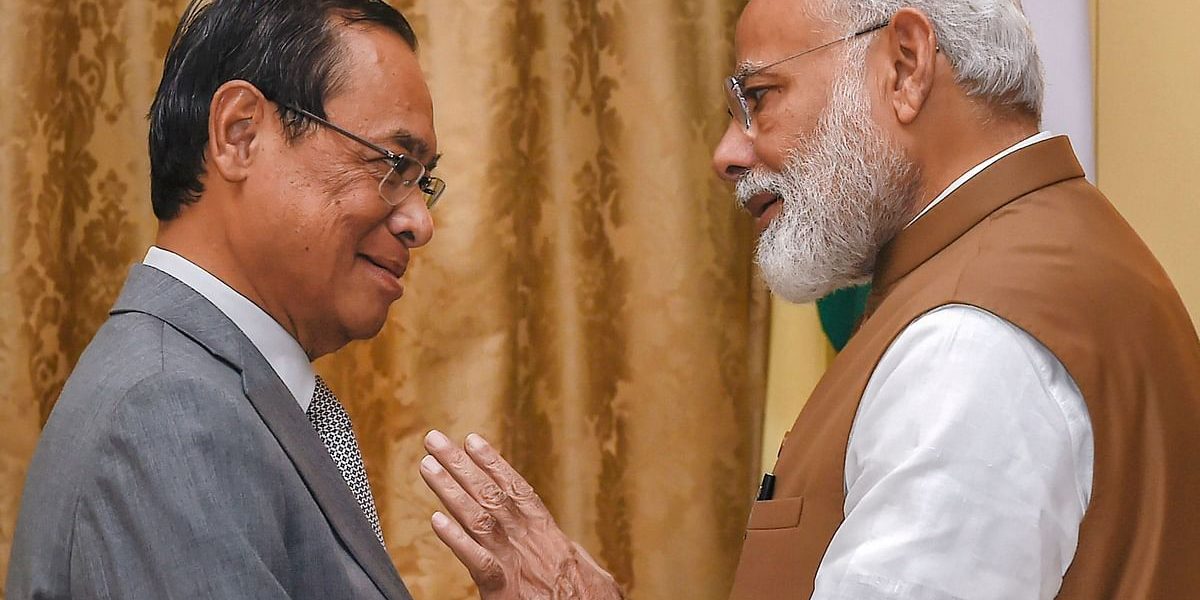 The charge of ‘contempt of court’ is usually levelled by a judge at a litigant or a third party who scandalises or lowers the authority of the court. It’s a grave charge – one that can send you to prison – but what happens to judges who, by their conduct while in service or retirement, themselves scandalise or lower the court’s dignity?

The short answer is ‘nothing’. The long answer is that they may even end up in parliament.

I say this because India is being forced to confront – for the first time in its history – the unhealthy spectacle of a former Chief Justice of India, Ranjan Gogoi, being sworn in as a member of the Rajya Sabha as the government’s nominee.

Why should this matter? Because Gogoi as chief justice and master of the roster presided over – or allocated to benches that he chose – several important cases in which the Modi government was a party. And the government’s eagerness to give him a six year term as an MP suggests a disconcerting cosiness between judge and litigant – a most powerful litigant at that.

Don’t be fooled by official spokespersons and unofficial apologists that there is a precedent to what Prime Minister Narendra Modi and Justice Ranjan Gogoi have done. Yes, Ranganath Mishra was the first CJI to become a Rajya Sabha MP and Baharul Islam the first Supreme Court judge to become one. Even though the circumstances of their entry to the upper house are not remotely comparable to Gogoi’s case, anyone foolish enough to cite them as precedents should remember this – these examples do Modi and Gogoi no credit.

Baharul Islam was rewarded by Indira Gandhi in 1983 for delivering a judgment favourable to a Congress chief minister accused of scamming a bank and entered the Rajya Sabha six months later. So if the government’s supporters want to cite Islam’s case, let them tell us which judgments Gogoi is being rewarded for.

Let us turn to Ranganath Mishra next.

Like Islam, Mishra too was a dishonourable judge. As head of a formal commission of inquiry, he helped the Rajiv Gandhi government cover-up the Congress party’s role in the November 1984 massacre of the Sikhs following Indira Gandhi’s assassination. That’s probably what ensured he became CJI in the first place. Then, upon retirement in 1992, he was appointed chairman of the newly established National Human Rights Commission – a post reserved for retired chief justices of the Supreme Court.

So if someone says “What about Ranganath Mishra”, my answer is, OK, Mishra was a cover-up specialist who was duly rewarded. What is it that Gogoi helped Modi cover up?

In any case, and this is important, Mishra’s entry into the Rajya Sabha in 1998 came not as a favour from the government – Atal Bihari Vajpayee was prime minister at the time – but as a nominee of the opposition Congress party under Sonia Gandhi. Of course, his nomination was proof of the unhealthy relationship between the former judge and the Congress party but it did not represent a breach of the separation of powers between the judiciary and the executive that Gogoi’s nomination by the Modi government has triggered.

What is truly shocking about Gogoi going to the Rajya Sabha as the government’s nominee is that until four months ago, he was presiding over cases in which the government had enormous political stakes.

What does his nomination by the same government then tell us about his attitude towards those matters and his impartiality as a judge? Justice A.P. Shah, a respected former chief justice of the Delhi high court, has gone so far as to say he perceives Gogoi’s Rajya Sabha seat as a “quid pro quo in the light of various judgments which were seen as controversial”. The message which this nomination sends out to the judiciary as a whole, he said, is “that if you give judgments that are favourable to the executive, you will be rewarded. If you don’t do so, you will be treated adversely or you might be transferred or not considered for elevation.”

And here, of course, there is no dearth of examples. Remember the midnight marching orders delivered to Justice S. Muralidhar right after the hearings he held on the Delhi riots went against the government and police? Remember Justice Akil Kureshi, who had jailed Amit Shah in 2012 and who was chosen last year by the Supreme Court collegium to be chief justice of the Madhya Pradesh high court? After months of delay, the government finally got him reassigned to the smaller court of Tripura.

Incidentally, Justice Shah is not the first person to point to this problem. The late BJP leader Arun Jaitley said much the same thing in 2012. And the First Law Commission warned of this danger way back in 1958. But no one bothered to do anything about it because it seems to have suited politician and judge alike.

Now, if we look at Gogoi’s record as CJI, there were broadly speaking three kinds of politically sensitive cases that he handled.

The first were those he presided over which went in favour of the Modi government – especially Rafale and Ayodhya.

Then there were the petitions the government wanted him to sit on, and which he obliged them by doing –  like the legality of electoral bonds or the constitutionality of scrapping Article 370, the communications blockade and mass arrests in Jammu and Kashmir.

Finally, there were those cases which seemingly went against the government – especially the CBI director’s matter and the entry of women worshippers at Sabarimala – but where Gogoi created an opening for the government to eventually have its way. So Alok Verma was reinstated as CBI director but left powerless till the government was able to legally move its own man in. And the Sabarimala verdict was immediately sent for review and then referred to a larger bench just before Gogoi retired, presumably setting the stage for its possible overturning.

Allegation of sexual harassment and vendetta

Even if we give Gogoi the benefit of doubt in all these cases – perhaps these judgments were really the product of his fine legal mind and not some sordid ‘quid pro quo’ – there remains one fatal flaw in his career as CJI which brought the court into disrepute and now casts a shadow over parliament too. I’m talking about the manner in which he handled the allegation of sexual harassment levelled against him by a junior court assistant.

Again, let us, for the moment, give him the benefit of doubt on the veracity of the actual harassment charge. Yet, Gogoi implicated himself by two processes he set in motion to supposedly clear his name.

First, the woman, her husband and brothers-in-law were subjected to a vicious vendetta that included dismissal and being framed for crimes they never committed. None of that could have happened without a push from powerful quarters.

Second, when this vendetta came into the public domain along with the woman’s allegation of sexual harassment, Gogoi was instrumental in ensuring a hideous judicial cover-up. He presided over a special sitting of the Supreme Court convened to hear his own case – an act of astonishing judicial impropriety that he pompously called ‘A Matter of Great Public Importance Touching Upon the Independence of the Judiciary’ – where he slandered the young woman who had complained against him, and claimed he was the victim of a ‘bigger plot’ to ‘deactivate’ him.

Though an in-house inquiry subsequently declared the woman’s charges against Gogoi were “baseless”, the fact that they were not baseless was confirmed by the dropping of the fabricated extortion case against her and her husband – and her quiet reinstatement this January. As for the ‘conspiracy’ Gogoi saw in her charge, nothing has been seen or heard of it since.

In any polity that values transparency, in any judicial system that upholds the rule of law, the young woman’s allegations would have been taken seriously. At the very least, her reinstatement would have led to a clamour for the case against Gogoi to be re-examined impartially and scuppered any hopes he had of a post-retirement placement. But India’s rulers value Gogoi more than they do elementary principles of justice. And India’s judiciary seems not to want to cross swords with the political establishment.

Modi and the judiciary

The war against the separation of powers began early in Modi’s tenure as prime minister and Gogoi’s emergence as a government-nominated legislator is an indication of how successful the assault has been. In 2014, Modi launched a two-pronged attack on the independence of the judiciary. By sending the recently retired CJI, P. Sathasivam to Kerala as governor, he dangled the prospect of attractive post-retirement sinecures for judges who play ball. But he also sought to directly control the process of appointing judges by pushing the National Judicial Appointments Commission (NJAC) as an alternative to the collegium system.

The judiciary killed the NJAC, seeing it as an encroachment on their own prerogatives, but could come up with no defence against the twin viruses of government blandishment and pressure. At least two recent CJIs were apparently hobbled by the prospect of corruption probes against themselves or their kin, thanks in part to Kalikho Pul’s suicide note, while the sexual harassment-cum-vendetta matter (and perhaps additional issues) cast a shadow over Gogoi’s tenure. Greater men than he have been known to strike Faustian bargains for less. Other democracies have investigated (and in some cases indicted) their leaders on the basis of diaries, official documents, tax papers and affidavits – Israel, South Korea, Brazil, Italy – but in India, history will record that it was the apex court which refused to even sanction a probe into the Birla-Sahara papers, Judge Loya’s death, the refusal of the CBI to appeal the discharge of Amit Shah from the Sohrabuddin murder case and the as-yet unanswered aspects of the Rafale aircraft deal.

The public at large may have been in the dark about the factors preying on the mind of key judges (until The Wire helped break all those stories) but the men in power had all the information they needed to carry the day. Not surprisingly, the NJAC was soon forgotten. Why bother with a formal commission if the system of judicial appointments was under control and the allocation of sensitive cases was taking place in a manner that was to the government’s liking?

In an act of courage and defiance, four senior judges of the Supreme Court  held a press conference in January 2018 to warn how the undermining of judicial independence was endangering democracy.  Two years later, it is clear that nothing has changed. Gogoi’s participation alongside J. Chelameswar, Madan B. Lokur and Kurien Joseph in that press meeting appears anomalous in hindsight since he later manifested all the ills in his own functioning as chief justice that the then CJI Dipak Misra had been accused of. And took them to their logical conclusion.

If you can’t beat ’em, join ’em, the saying goes. I’m not sure Gogoi ever wanted to beat back the government’s encroachments on the judiciary. What is crystal clear, however, is that he has willingly joined the camp of those who have contempt for the constitution and the courts. And this is surely a ‘Matter of Great Public Importance Touching Upon the Independence of the Judiciary’.