The Lathi and India’s Colonial Cure for the Coronavirus

Routine, excessive and zealous use of a colonial weapon of crowd control has no place in the rights-based framework of the Indian republic. “Those were the days when we were not used to lathi charges by the police; our sensitiveness had not been blunted by repeated brutality,” remarked Jawaharlal Nehru in his autobiography, while describing how the assault on Lala Lajpat Rai during the anti-Simon Commission protests came as a huge shock to the entire nation. The shock, Nehru points out, was two-fold.

First was the realisation that one of the tallest and most respected leaders of the community could be assaulted in such a manner; and second, was the sheer brutality of the assault. Much time has passed since and the Raj is long gone; yet the colonial legacy of deploying the lathi’s brutality by the police has been wilfully adopted by the modern Indian State, and that too at a progressively decreasing threshold.

The manner of the ongoing enforcement by the police of the 21-day curfew in the wake of the nation’s response to COVID-19, comes as a disturbing reminder of the ease with which lathi blows are resorted to by the police even more than seventy years after independence, with no qualitative distinction being maintained between responding to a single person defying a curfew, or dispersing an unlawful assembly or a large crowd of miscreants.

Lathi charge seems to have become the first response of the police forces in dealing with law and order problems, with no efforts towards tailoring the response according to the gravity of a situation. It has been barely a week since the nationwide lockdown was announced, and countrywide gruesome accounts of police brutality have already emerged, begging the question whether it is time for legally regulating this colonial era weapon of crowd control, and prescribing sanctions for its misuse by errant police officers.

At the outset, it may be helpful to set-out the present legal framework governing the use of lathi charge or the situations in which this measure is considered legally acceptable. Sections 129 of Code of Criminal Procedure, 1973 (CrPC), provides a basic framework for use of force for ‘Maintenance of Public Order and Tranquillity’.

Section 129 empowers the police and armed forces to use force to disperse an ‘unlawful assembly’, i.e. assembly of five or more persons. Such use of force, however, may be exercised only after an executive magistrate or the police officer in charge of a police station (or in their absence any officer not below the rank of a sub-inspector)  has ordered such assembly to disperse; and even if after the order the said assembly does not disperse, then the police personnel may use force to disperse such an assembly only pursuant to the specific order of the aforesaid officers.

The said legal principle has been reiterated by the high courts of Delhi as well as of Punjab and Haryana by laying down three essential conditions that need to be satisfied before force can be used by the police: first, there should be an unlawful assembly of five or more persons likely to cause violence or a breach of peace; second, such assembly is ordered to be dispersed; and third, despite such orders, the assembly does not disperse. 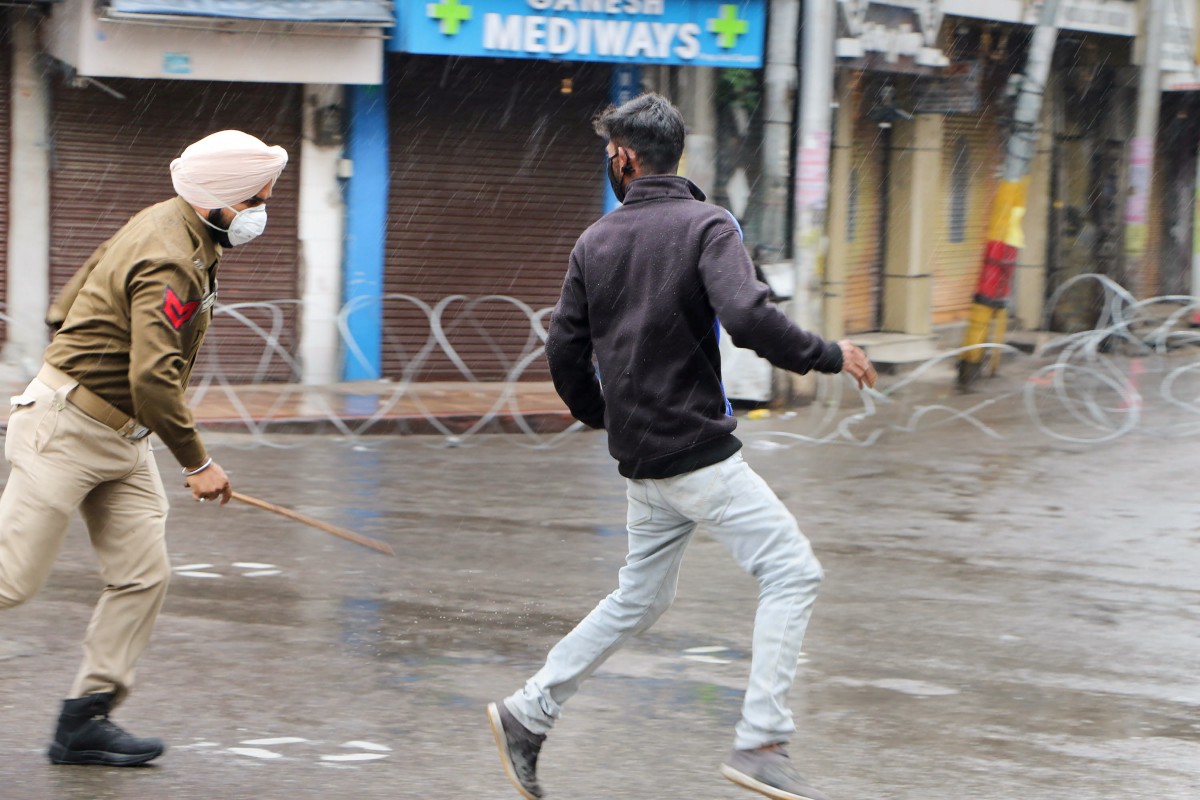 A policeman chases away a commuter for defying the nationwide lockdown imposed in the wake of coronavirus pandemic, in Jammu, Friday, March 27, 2020. Photo: PTI

While, none of the above provisions specify the exact form in which ‘force’ is to be exercised, ‘lathi charge’ is the commonly prevalent practice on ground. For instance, police manuals of various states such as of Uttar Pradesh and Kerala provide that the order for use of force can only be given by and in presence of a magistrate and lathi charge should only be resorted to if the crowd refuses to disperse despite a “clear warning of the intention to carry out a lathi charge” having been given to them.

In Anita Thakur and Ors. vs. Govt. of J & K & Ors. the Supreme Court had remarked that the use of excessive force by the police results in violation of human rights and dignity. Even The UN Basic Principles on the Use of Force and Firearms by Law Enforcement Officials emphasise that the use of force by law enforcement officials should be commensurate with due respect for human rights, therefore, they should as far as possible, apply non-violent means before resorting to the use of force and the force can be used only if other means remain ineffective and the use of force becomes unavoidable.

Thus, a lathi charge can only be resorted to by the police to disperse a gathering of five or more which has been legally designated as an ‘unlawful assembly’. However, the use of lathis by the police in dispersing individuals off the streets during the time of a national lockdown such as the present, fails to meet even this very preliminary threshold as even lone individuals have been mercilessly targeted and canned. Further, even where an ‘unlawful assembly’ has been designated as such, the use of lathis cannot be resorted to without due warnings to disperse, and only upon a refusal or a display of a demonstrable intention to not to disperse.

Also read: Section 144 Is Not a Cover for Unchecked Police Action

Therefore, it is clear that the force used by the police needs to be proportionate and not in excess to the threat perceived by them and the state’s forces have to act only in self-defence and not in retaliation.

Despite the above-mentioned legal position, the police assault by use of lathis has largely been indiscriminate in enforcing the national lockdown, especially when lone individuals are made targets of lathi charges as they have been in the past few days, the police’s actions then betray a zealous motivation of penalising in the spirit of ‘teaching a lesson’, as opposed to a genuine administrative response for crowd control; and this has in some cases even resulted in death, while in serious injuries in most others.

One of the most shocking instances was the release of a video showing police personnel ‘sanitising’ their lathis beforehand to deal with the violators at the time of this lockdown. That this is a problem of a pervasive institutional culture and not reflective of one-off instances of erring police officers acting beyond the law, is evident from uniform presence of this practice across the police forces of various states.

In that context, it is high time for the particular practice of lathi charges to be formally regulated by the law, with clear prescriptions for those who violate such provisions. 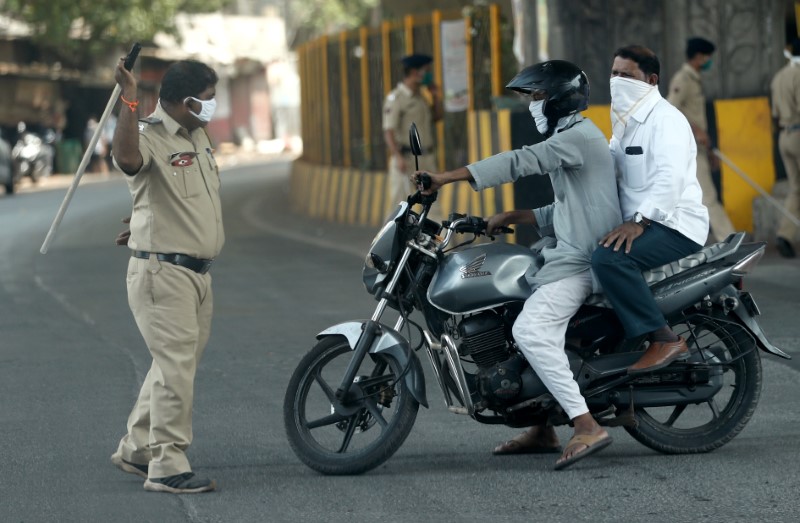 A policeman wields his baton at a man riding a motorbike as a punishment for breaking the lockdown rules, after India ordered a 21-day nationwide lockdown to limit the spreading of coronavirus disease (COVID-19) in Mumbai, March 25, 2020. Photo: Reuters/Francis Mascarenhas

A good starting point for achieving such a framework is provided by the Supreme Court’s decision in Ramlila Maidan Incident v. Home Secretary, Union of India (2012) where the Supreme Court took clear cognisance of photographs and CCTV footage showing, a single individual being surrounded by four-five police personnel and being canned. Videos showing some very similar instances have also emerged during the past few days of the lockdown.

In this specific context, the Supreme Court unequivocally declared such practices as ‘impermissible under the prescribed procedures, rules or the standing orders. The court minced no words while stating that such actions on the part of the police “have an element of criminality”, and such errant officers/personnel, irrespective of the ranks they hold, would be liable accordingly.

Also read: Has India Changed That Much Since the Raj Days If It Can Let Its Poor Starve?

With multiple violations of a similar nature having been committed by the police since then, it is time for giving legal force to the kind of prescriptions envisaged by the Supreme Court in the Ramlila Maidan case. The need of the hour is to incorporate detailed legal provisions clearly specifying the contours of the use of lathi charges (such as in the Police Act, the CrPC, etc.) in accordance with the legal position previously discussed, together with corresponding penalties for violation of such provisions being incorporated in the Indian Penal Code (“IPC”). Furthermore, it is equally necessary for these provisions to be incorporated in relevant state police manuals to make the police personnel directly bound for compliance in everyday actions with respect to the unauthorised use of force.

Routine, excessive, and zealous use of a colonial weapon of crowd control has no place in the rights-based framework of the Indian republic. It is hoped that a legislative reconsideration of routine lathi charges, also sparks off a conversation around the extent to which the institutional cultures of our police forces still embody the legacies of colonial suppression.

Prabudh Singh graduated from NALSAR University of Law, Hyderabad in 2018 and is currently working as a lawyer in Delhi and Pranav Verma is an advocate based in Delhi.