The statement attached to the chargesheet claims Sawant was not aware of the event’s agenda and that it was organised without the police’s permission. Mumbai: Retired Supreme Court justice P.B. Sawant has alleged that the Pune rural police falsely attributed a statement to him in the recently filed chargesheet against five persons arrested in the Bhima Koregaon violence case. Justice Sawant, who was one of the two convenors (Justice B.G. Kolse-Patil being another one) of the Elgar Parishad, organised on December 31, 2017 at Shaniwarwada in Pune, claimed the police distorted facts and mischievously attributed to him a statement he never gave.

The statement claims Sawant was not aware of the event’s agenda and that it was organised without the police’s permission.

Justice Sawant told The Wire that on November 11, Shivaji Pawar, assistant commissioner of police, Swargate Division, had visited his residence in Pune along with a deputy commissioner of police and a constable. “The officer had come for an informal chat. He had come with some documents. He said he wanted to apprise me of the investigations carried out in the case and also explain the genesis of the term “urban Naxal”, which the police have been using in this case. The discussion lasted for over an hour and then the police left,” he said. “And today, I get to know that they have converted the informal meeting into my statement.”

Sawant said the statement has no truth at all. “I have never made such claims. The discussion was mainly from their side, I was only listening to what they had to say. They have smartly gone ahead and attributed some very problematic claims to me,” he said.

In the one-page statement marked as “Tapaas Tipan (investigation notings)”, attached with the 5,000-page chargesheet, and recorded on November 11, the Pune rural police claims Justice Sawant said he and Justice Kolse-Patil were together organising the “Samvidhan Bachav, Desh Bachav” event in Pune.

“Kolse-Patil and I had organised a public event on October 10, 2015. In 2017, Sudhir Dhawale and some members of Kabir Kala Manch met me and Kolse-Patil and informed us about the 200th anniversary of the battle of Bhima Koregaon and the expected turnout of the Ambedkarite crowd in Pune on January 1. They proposed an event could be jointly organised and that Kabir Kala Manch would take the responsibility of arranging for the required police permission,” the statement claims.

While Dhawale was arrested on June 6, several members of the cultural organisation Kabir Kala Manch have been named as accused in the case. They have not not been arrested yet.

The statement further says they had collectively decided to organise the event on December 31, a day before the Bhima Koregaon battle anniversary.

But the statement’s last paragraph, attributed to Justice Sawant, claims he was not aware of the agenda and the speakers of the event and that he had nothing to do with what transpired at Shaniwarwada on that day. “I fell sick on December 29 and was hospitalised until December 31. I could not attend the event. I have nothing to do with the said event,” the statement claims. 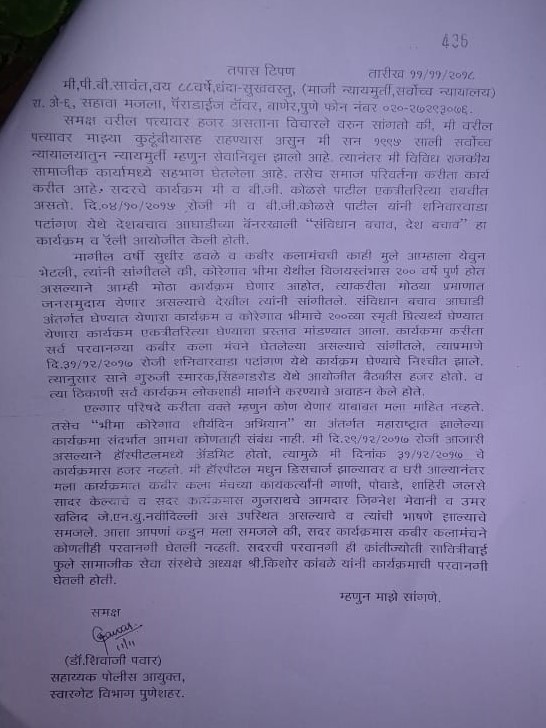 Copy of the statement attributed to Justice P.B. Sawant and added to the Bhima Koregaon violence chargesheet filed early this month. Sawant has alleged that the police have falsely attributed this statement to him and that his say was never recorded.

“Only after I was discharged from the hospital, did I come to know about the different activities that were organised at the event. Songs, Powadas, Shahir Jalsa was organised and leaders like Jignesh Mewani, Umar Khalid and other students from JNU had reportedly attended the event,” the statement claims. “I am only finding it from the police now that the event was organised without any police permission although the members of Kabir Kala Manch had claimed that they would be securing the required permissions,” reads the concluding para of the statement.

While the 88-year-old retired judge agrees on the part of the statement that he was unable to attend the event owing to his ill health, he says the rest of the claims are entirely distorted. “The discussion between me and Dr. Pawar has nothing to do with my statement. Not once did the police mention that they had come to record my statement. Today, on knowing that my statement has been attached to the chargesheet, I called up Dr. Pawar. He claims a constable who had accompanied him was taking down notes and his notings have been converted into a statement. But the truth is that neither the constable took down any notes nor did the police seek my permission before recording any statement. This is completely involuntary,” Sawant said.

The Pune rural police has, however, refuted Sawant’s claims. “The statement was recorded following all legal procedures. We have no reasons to record false statements of a retired Supreme Court judge. Whatever Justice Sawant told us on November 11 when we had visited his residence has been incorporated in the statement,” Pawar told The Wire. Pawar also added he would be meeting Sawant Novemeber 30 to “clarify misunderstandings”.

Justice Sawant, who retired as a Supreme Court judge in 1995, is a social activist. He was among the three retired judges who carried out independent investigations into the 2002 Gujarat riots. This report had indicted the Narendra Modi-led state government and the police for mass pogrom and atrocities against the Muslims in the state.

While Sawant and Kolse-Patil were at the forefront, around 260 other organisations had also supported the event. This event was organised at the city’s Brahmin-hub, Shaniwarwada, just a day before the 200th anniversary of an 1818 battle in which a British army with a contingent of Mahars defeated the much-stronger forces of the Brahmin-led Peshwa regime, infamous for their casteist policies.

Several Hindutva and Brahmin organisations like the Akhil Bhartiya Brahman Mahasangh (ABBM) had opposed the event. However, amid protests, people had gathered in large numbers. A day later, however, when lakhs of Ambedkarites, mostly Dalits, visited Bhima Koregaon, 35 kilometres from Pune city, they were attacked and their vehicles set on fire. Scores of people were injured in the attack.

The police had initially named two Hindutva leaders – Manohar alias Sambhaji Bhide and Milind Ekbote – as the prime conspirators of the attack. But the narrative was changed later and “Urban Naxals” were shown as the prime conspirators behind the violence. So far, police has arrested nine persons, mainly senior lawyers and well-known human rights activists, from across the country.