Definition of 'Sexual Assault' in POCSO Must Be Looked at From Victim’s Perspective: SC

The apex court bench said the results would be disastrous if the term 'physical contact' in the provision is interpreted in a way where the 'skin-to-skin' contact becomes necessary for constituting the offence.

New Delhi: The provision defining the offence of sexual assault against children under the Protection of Children from Sexual Offences (POCSO) Act must be looked at from the victim’s perspective and if the sexual intent is present then the offence is made out even without “skin-to-skin contact”, the Supreme Court on Thursday observed.

A bench headed by Justice U.U. Lalit stressed on the “intent to commit the sexual offence” and said the results would be disastrous if the term “physical contact” in the provision is interpreted in a way where skin-to-skin contact becomes necessary for constituting the offence.

The top court reserved its verdict on two appeals filed against the Bombay high court verdict, which had come under intense scrutiny, and had held that no offence of sexual assault under the POCSO Act is made out if there is no direct skin-to-skin contact between accused and the victim.

A single judge of Justice Pushpa Ganediwala, of the Nagpur bench of the Bombay high court, had on January 27 acquitted the accused under POCSO Act and recognised the act as use of criminal force with the intention to outrage a woman’s modesty defined under Section 354 of the Indian Penal Code. The verdict had said groping a minor’s breast without “skin-to-skin contact” cannot be termed as sexual assault as defined under the POCSO Act. It had said since the man groped the child without removing her clothes the offence cannot be termed as sexual assault but it does constitute the offence of outraging a woman’s modesty under IPC section 354.

Also read: The Way POCSO Cases Are Handled Is Another Reason Why Our Trust in Lower Courts Is Fading

The apex court bench, also comprising Justices S. Ravindra Bhat and Bela M. Trivedi, discussed threadbare the definition of section 7 of the POCSO Act which deals with the offence of sexual assault against children.

So, therefore, the primary thing is that if the sexual intent is proved then everything will fall in place, the bench observed while expressing its reservation on the interpretation made by the high court. 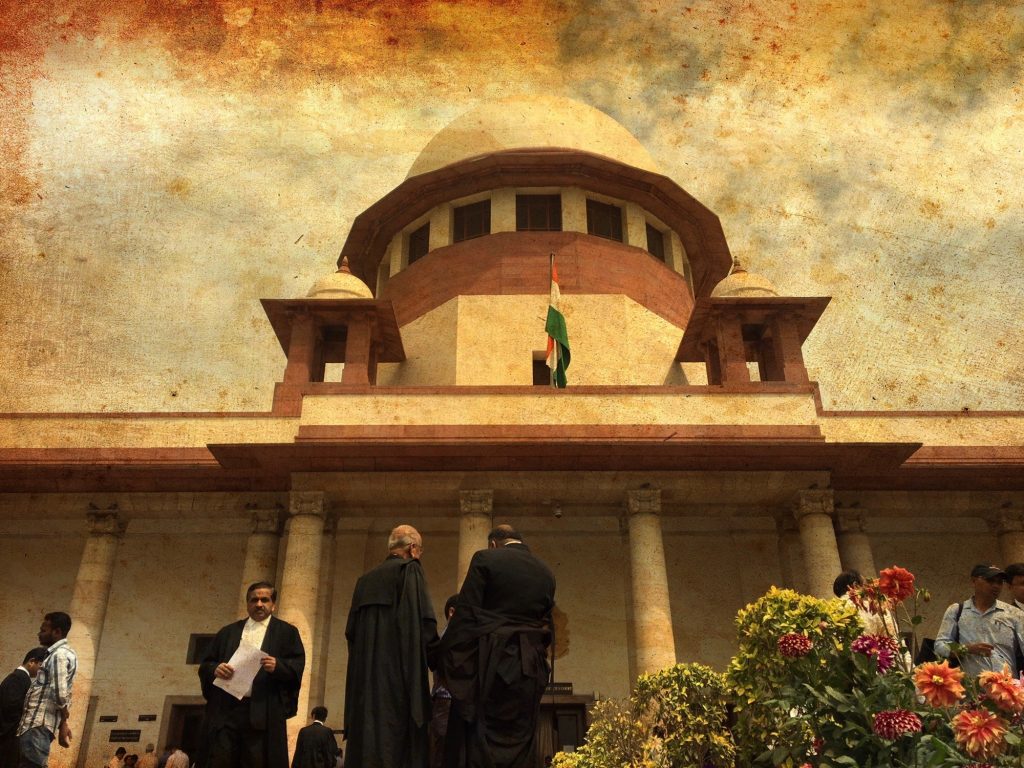 However, senior advocate Siddharth Luthra, appearing for the convict in the case as an amicus curiae on behalf of the Legal Aid Society, argued that skin-to-skin contact is necessary to constitute sexual assault under section 7 of the POCSO Act, LiveLaw reported.

He referred to the contents of the provision and said that there were issues with the first part of the provision which said if an accused, with sexual intent, touches the vagina, penis, anus or breast of the child or makes the child touch the vagina, penis, anus or breast of such person or any other person, then the offence of sexual assault is made out.

However, he argued that in the second part of section 7, since the phrase ‘contact’ was preceded by ‘physical’, the import would be that skin-to-skin contact would be essential to constitute an offence of sexual assault.

He added that the second part requires sensitive interpretation.

He further submitted that the crucial difference between section 354 of IPC (outraging the modesty of a woman) and section 7 of POCSO was the fact that under IPC section 354 even the touching of cloth would be a part of force or criminal force.

According to the LiveLaw report, the court asked why there was a difference between ‘touch’ and ‘physical contact’.

“If the import of both is the same then why the legislature is using two different terms? Can we say that physical contact is anything less than touch?” it asked.

“Why according to you physical contact has to be read as skin-to-skin contact? Why can’t it be through cloth or any kind of material? Why is it applicable to the first part and not the second part?” Justice Lalit asked.

“If we accept your submission, what kind of results will we get? According to us, the results will be disastrous!” the bench observed.

It further observed that one must rely on different situations to see whether a given interpretation logically holds. It also observed that when an offence has been clearly laid down, if there was any need to “stretch one’s reasoning” and rely on other provisions.

Noting that one must look at things from the victim’s perspective, the court said: If a pen is used to poke a person, there is no skin-to-skin touch and according to arguments advanced, there is no sexual assault. But there is invasion of privacy and violation of modesty of the child, the court said.

Senior advocate Geetha Luthra, representing National Commission for Women, referred to P. Ramanathan Aiyar’s The Law Lexicon and argued that “touch” and “physical contact” are synonyms, and therefore, no distinction can be made between the two.