'Takes 1 Year, 5 Months to Dispose of a POCSO Case; UP Has Highest Pendency Percentage': Report

The report studies trends in POCSO Act cases through the last decade and the judiciary's impact on its implementation.

New Delhi: It takes an average of a year and five months to dispose of a case registered under the child protection law POCSO and Uttar Pradesh is a state which has the highest percentage of such cases pending, according to a report published by the Vidhi Centre for Legal Policy on the completion of 10 years of the law.

The POCSO Act, which stands for the Protection of Children from Sexual Offences, completed a decade of being on the statute books in India on November 14, 2022.

The report, a product of Vidhi’s Justice, Access and Lowering Delays in India (JALDI) Initiative and the Data Evidence for Justice Reform (DE JURE) programme at the World Bank studies trends in POCSO cases through the decade and the courts’ impact on its implementation.

The study looks at nearly 400,000 POCSO cases and analyses 230,730 of them to understand pendency and disposal patterns.

Though pendency of POCSO cases was increasing gradually over the years, there was a sharp increase of 24,863 cases in the number of pending cases between 2019 and 2020 which could be attributed to the COVID-19 pandemic, the report notes. 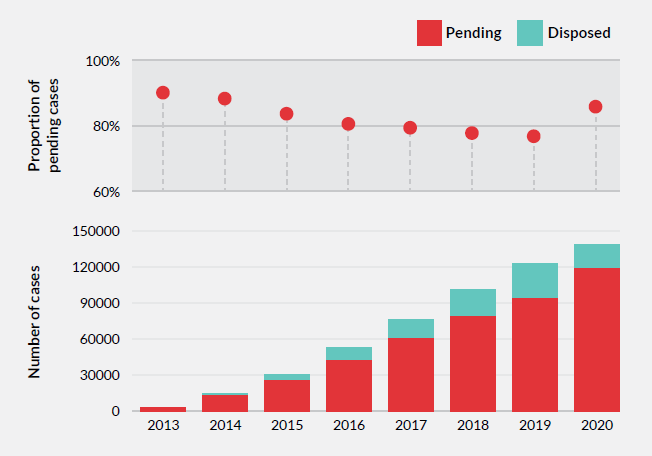 The report finds that in Uttar Pradesh – the state with the highest pendency – has more than three-fourths (77.77%) of the total POCSO cases filed between November 2012 and February 2021 pending.

Out of the five districts with the highest pendency percentages, four are in Uttar Pradesh (Lucknow, Hardoi, Budaun and Allahabad) and one in West Bengal (Howrah).

The state with the highest disposal percentage for this time is Tamil Nadu, at 80.2%.

Time for disposal of cases

The report finds that on an average, it takes 509.78 days (a year and 5 months) for a POCSO case to be disposed of as against the one year time period stipulated by Section 35 of the POCSO Act.

Chandigarh and West Bengal are the only states where the average time taken for convictions is within the one year period.

The report also finds that in most states, courts spend more time in hearing cases that ultimately end in conviction as compared to cases that end in acquittal.

For every one conviction in a POCSO case, there are three acquittals. Acquittals are significantly higher than convictions for all of the states studied in the report. 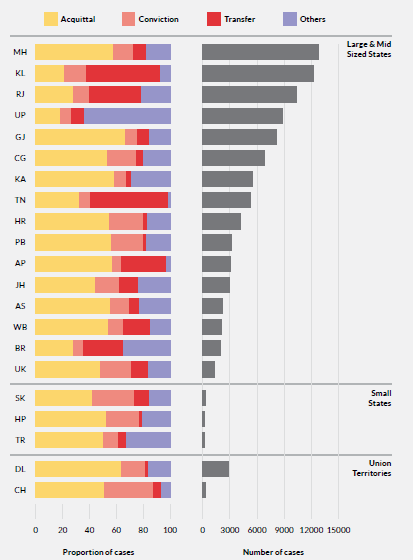 The report also says that the evidence stage – involving both the prosecution and the defence presenting evidence before the court to support their case – is the most time consuming out of all stages including preliminary hearing, framing of charge, evidence, and arguments.

The average number of days taken per POCSO case in different states varies between 877.96 days (two years and five months) in Himachal Pradesh to 215.43 days (seven months) in Chandigarh, the report finds. As many as 183.41 (over six months) days are spent on the evidence stage in a typical POCSO case.

In spite of such a lengthy duration of presenting evidence, as Indian Express highlights in its report on this study, 43.44% of trials end in acquittals and only 14.03% lead to convictions.

Among recommendations that the report has is the reduction of age of consent to 16 from 18 with adequate safeguards. Recently, the Delhi high court, granting bail to an individual arrested on charges under POCSO, had said that the intention behind the Act was to prevent sexual abuse against children and not to criminalise the consensual romantic relationships of young adults.

The report also, notably, asks to “create mechanisms to enable judges and prosecutors to have the required skill set to deal with the ‘vicarious trauma’ they experience when dealing with cases of heinous sexual offences committed against children” and allow them to execute their work without the nature of it affecting their mental health.