If You Mock Gandhi, Other ‘Historically Respectable Personalities’, Get Ready to Go to Jail

The SC has opened the door for frivolous cases brought by organisations on behalf of “historically respectable personalities”, that can and will cast a severe chilling effect upon political satire and other areas of core political speech. 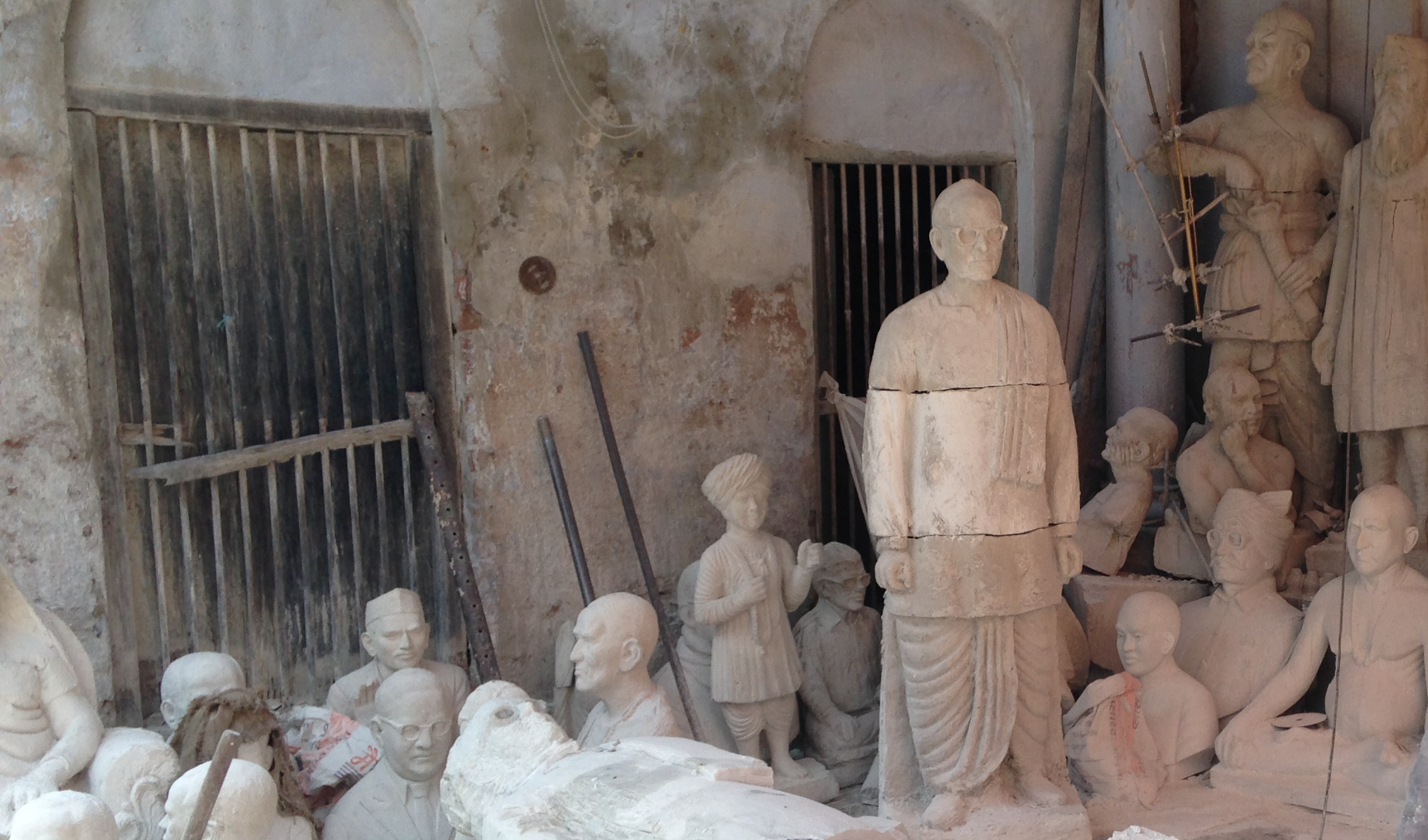 Inside a workshop for statues of Historically Respectable Personalities, Varanasi, May 2014 [Photo: Siddharth Varadarajan] Inside a workshop for statues of Historically Respectable Personalities, Varanasi, May 2014 [Photo: Siddharth Varadarajan]

Must we exercise special caution and solicitude when we choose to parody or mock “historically respectable personalities”? Do the boundaries of our constitutional right to freedom of speech and expression vary with whom it is that we are talking about? Are there things that we are permitted to say about ordinary people, but are barred from saying about Mahatma Gandhi? In a significant judgment which could have far-reaching repercussions for the freedom of speech and expression in India, a two-judge Supreme Court on Thursday answered all three questions in the affirmative.

The case of Devidas Ramachandra Tuljapurkar vs State of Maharashtra involved a controversy dating back to 1994. A Marathi poem called “Gandhi Mala Bhetala” (‘I Met Gandhi’) was published in a private magazine. On reading the poem, one V.V. Anaskar, a member of the ‘Patit Pawan Sangathan’, took offence, and filed a complaint with the local police. After investigation, the author, printer and publisher of the magazine were charged under Section 292 of the Indian Penal Code, which criminalises obscene speech. The accused’s 20-year battle through the Indian legal system to get the charges quashed ended with yesterday’s decision in Tuljapurkar, which refused to interfere with the original charge, and sent the case back to trial. In doing so, however, the Supreme Court fundamentally reshaped the scope and contours of Indian obscenity law, and its relationship with free speech.

To understand the significance of Tuljapurkar, we must locate it within the history of Indian obscenity law. Section 292 of the Penal Code is a Victorian-era legislation which was most notoriously used to (unsuccessfully) prosecute Ismat Chughtai and Sadat Hasan Manto. After the framing of independent India’s Constitution, Section 292 was challenged on the touchstone of Article 19(1)(a)’s guarantee of the freedom of speech and expression. However, in Ranjit Udeshi vs State of Maharashtra, which also involved a challenge to the ban upon D.H. Lawrence’s Lady Chatterley’s Lover, the constitutionality of Section 292 was upheld. Called upon to provide a definition of obscenity to guide the legislature in framing a more detailed law, Justice Hidayatullah adopted an 1868 English standard, popularly known as the “Hicklin test”: matter was obscene if it had “a tendency to deprave and corrupt those whose minds are open to such immoral influences, and into whose hands a publication of this sort might fall.”

Ironically, by the time Ranjit Udeshi was decided in 1965, England, which had birthed the Hicklin test, had abandoned it. In practice, it was seen to create many problems. The words “deprave” and “corrupt” were unconscionably broad. The test was acontextual, which meant that trials would be reduced to witnesses pointing out specific words or phrases that they found “obscene”. In Manto’s trial, for instance, the prosecution tried to argue that the word “bosom” was obscene, and accordingly saw its case thrown out of court. And furthermore, by choosing as its subject “those whose minds are open to such immoral influences”, the test judged obscenity from the point of view of the morally “weakest” and most corruptible constituency of society, thus setting the bar for obscenity very low indeed.

As the decades progressed, the Indian Supreme Court began to realize as well that the Hicklin Test was unsuitable for a society that was never Victorian, and had long left such sensibilities behind.

In a series of cases, the court shifted the emphasis from the most corruptible constituency, to the “average, strong-minded and reasonable person.” In a landmark judgement called Khushboo vs Kanniamal, while quashing numerous criminal complaints against a Tamil actor for her vague support of pre-marital sex, the Supreme Court observed that the very purpose of free speech was to peacefully challenge dominant societal norms. And last year, the Supreme Court finally got rid of the archaic Hicklin test, replacing it instead with the substantially more progressive American obscenity standard, developed in Roth vs United States. According to Roth, obscene matter is that which “to the average person, applying contemporary community standards… the material, taken as a whole, appeals to the prurient interest.”

The Roth test is substantially more free speech-friendly than Hicklin, because it does not cover all cases of moral depravity or corruption caused by “obscene speech”. Rather, speech must – from the point of view of the average person – appeal to the “prurient interest”. It is clear that Roth is agnostic about who the speech targets, or attacks – whether ordinary individuals, or “historically respected figures”. All that matters is the nature of the speech itself.

“when the name of Mahatma Gandhi is alluded or used as a symbol, speaking or using obscene words, the concept of “degree” comes in. To elaborate, the “contemporary community standards test” becomes applicable with more vigour, in a greater degree and in an accentuated manner. What can otherwise pass of the contemporary community standards test for use of the same language, it would not be so, if the name of Mahatma Gandhi is used as a symbol or allusion or surrealistic voice to put words or to show him doing such acts which are obscene.”

Unfortunately, the court once again failed to clarify what it meant when it held that “contemporary community standards” would apply with “greater degree and in an accentuated manner”. Does it mean that the court will no longer accept long-established, statutory defences to obscenity charges, such as the social or aesthetic qualities of the work in question? Or does it mean that it will lower the evidentiary standards required to prove what community standards might proscribe in a particular case? The question seems to have been left open.

Unanimity of the graveyard

Without any guidance upon what the community standards are meant to apply to (since the court dispensed with the requirement of prurient interest), or what it means for community standards to apply in an accentuated manner, and most of all, without any satisfactory definition of “historically respectable personalities”, the court has opened the door for a multiplicity of frivolous cases in the immediate future, brought by organisations on behalf of “historically respectable personalities”, that can and will cast a severe chilling effect upon political satire and other areas of core political speech. But surely, political and social iconoclasm is one of the defining features of a thriving, pluralist community, as is a healthy skepticism and disrespect of its idols.

This brings us to the most troubling aspect of the Supreme Court’s decision, which is implicit throughout the 145 pages of the judgment: the idea that there are certain individuals, who occupy such an exalted place in national consciousness and national narrative, that they are simply too precious to be sullied with disrespect or mockery. Such reasoning, however, is contrary to the most basic purposes of free speech in a democracy: to question, criticize and undermine the most dearly held beliefs of the majority, to use the medium of expression to challenge the most deeply entrenched moral and social norms; in short, to offend, shock or disturb. Seventy years ago the great American judge, Robert H. Jackson, wrote that “compulsory unification of opinion achieves only the unanimity of the graveyard.” For every nine people who believe in Gandhi’s ‘historic respectability’, there will be one person who doesn’t. By invoking “community standards” to deny him the right to voice his disagreement through satire, through parody, and through outright disrespect, the Supreme Court is attempting to impose the very kind of compulsory unification that can only end in the graveyard.

The Indian judiciary has been more sensitive to such concerns in the past. Four years ago, at the Delhi High Court, Justice Muralidhar warned against the imposition of totalising narratives that brooked no deviation from the approved line. Rejecting the Censor Board’s argument that a film portrayed a biased and one-sided view of events, he observed that the freedom of speech included the “the right to speak, to disseminate, to argue, to debate, to witness, to react, to ignore, to engage in dialogue, to discuss, to agree, to disagree, to form and hold opinions… [and the] right…to think autonomously while reacting to the speaker… and to make informed choices, without being controlled by the State.”

The next time the Supreme Court sits down to consider the freedom of speech and expression, we can only hope that it is these words – and not Devidas Ramachandra Tuljapurkar vs State of Maharashtra – that resonate most deeply.

(Gautam Bhatia is a Delhi-based lawyer and legal academic)