Special Public Prosecutor in the 2008 Malegaon blast case, Rohini Salian, has said that ever since the new government came to power in the Centre, there has been pressure on her to go soft on the group of extremist Hindus accused of that crime. 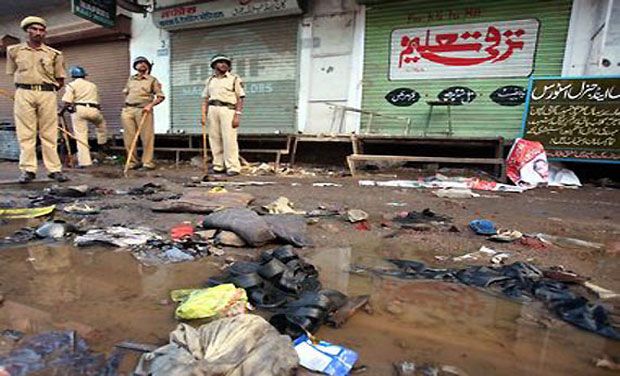 New Delhi: In a sensational disclosure that raises doubts about the independence of the investigative and prosecutorial process in cases where the accused share ideological, political or organisational connections with the ruling Bharatiya Janata Party and sangh parivar, a senior Mumbai prosecutor has accused the Narendra Modi government of asking her to “go soft” on Hindu extremists accused of a major terrorist bombing.

Special Public Prosecutor in the 2008 Malegaon blast case, Rohini Salian, has said that ever since the new government came to power in the Centre, there has been pressure on her to go soft on the group of extremist Hindus accused of that crime. Specifically, said Salian, she had received verbal instructions from the National Investigation Agency — the Central body tasked with probing the matter – asking her to give the accused an easy ride, the Indian Express reported.

Salian said that an NIA officer came across to her office to give these instructions one day:

“He didn’t want to talk over the phone. He came and said to me that there is a message that I should go soft,”

Before the June 12 hearing of the case in the Mumbai sessions court, the same NIA official told her that ‘higher ups’ didn’t want her to appear for the matter, and that someone else would be appearing instead. “So the meaning very clearly was, don’t get us favourable orders. Unfavourable orders [were] invited — that goes against society,” she told the Indian Express in an interview.

Salian is a well-known lawyer and public prosecutor who has represented the state in scores of cases. Asked by the newspaper how she came to handle the Malegaon case after having quit as a public prosecutor in 2007, she said:

“It was on [Mumbai Anti-Terrorist Squad chief] Hemant Karkare’s insistence. When he called me to take over, I told him that I had just given this up after seven years and I was fed up. But he said, “No madam, you go through the papers.” His voice was shaking and he sounded very disturbed. Then I heard that the accused were all Hindus and I was surprised… From morning to evening I read the papers. I was shocked. I started crying and got emotionally upset. In that matter I also got to know about Samjhauta and Modasa…

“Long after [Karkare’s] death, we were all very upset. Then one day I went to [the] ATS and shouted at the police — what are we doing, we have to make that soul happy, let us go ahead. I told the officers, one thing we are going to do — not a single drop more or less — we have to be very impartial in the chargesheet. Rarely would you come across such a chargesheet, so tough, so complicated and intricate. Only later did we understand the story; initially we were not understanding.”

On Thursday, the NIA issued a statement denying Salian’s allegations:

[The] NIA completely denies the issuance of inappropriate briefing by any officer of the agency to the Spl. PP or creating impediments in her prosecution work of NIA cases she has been handling.

The agency also said it was incorrect that Salian had been bypassed, since the Malegaon case has not yet reached the trial stage where special prosecutors are normally deployed.

The 2008 Malegaon blast case has 12 accused, all of them Hindu, and some of the accused were allegedly also involved in the Modasa blast in Gujarat, the Malegaon blast of 2006, the Mecca Masjid Blast in Hyderabad in 2007 and the 2007 Samjhauta Express blast, which killed 68 people, mostly Pakistani nationals.

A key point in the Malegaon case from the start has been the applicability of the Maharashtra Control of Organised Crime Act (MCOCA). For it to apply, there needs to have been cognizance of two previous chargesheets against one or more of the accused.

While the Bombay High Court ruled that cognizance is taken of the crime, not the accused, and hence the chargesheets of the previous blasts would suffice to apply the MCOCA, the Supreme Court reversed this order on the ground that no evidence regarding the previous chargesheets had been filed yet. The Supreme Court then asked the Bombay HC to designate a special court for the matter and start trial immediately.

In her interview to the Indian Express, Salian said “it was decided the case should be transferred to a special court with a special judge. So back to square one — very haphazard order.”

Salian’s sensational disclosure comes in the wake of the Central Bureau of Investigation’s refusal to appeal the discharge of BJP president Amit Shah in the murder of a young woman, Kauser-bi, her husband Sohrabuddin, and Tulsiram Prajapati. Shah had been indicted after the Supreme Court ordered the CBI to investigate the case. But last December, a CBI special court discharged Shah even before the trial had started. The agency has chosen not to appeal this ruling – highly unusual in a murder case – in the high court.

Note: This story has been edited to add a reference to the NIA’s statement which was issued after the original story was published.