Hearing a follow-up PIL, the apex court sought the response of the Centre and ten states on the allegation that they did not implement the directions it had issued to prevent mob lynching.

New Delhi: The Supreme Court on Friday sought the Centre and 10 states’s response on the allegation that it has not implemented a slew of directions issued by it last year to curb mob lynching and violence.

Senior advocate Anukul Chandra Pradhan, appearing for the organisation, said while incidents of lynching are on the rise, the government has not taken any steps to implement the directions of the apex court aimed at tackling the menace.

The trust said a slew of directions passed on July 17, 2018 by the apex court to the government to provide “preventive, remedial and punitive measures” to deal with offences like mob violence have not been implemented.

Also Read: One Year After SC Recommended a Lynching Law, Is Anybody Listening?

The directions were passed after a PIL was filed by activist Tehseen Poonawala, who had brought the issue of rising incidents of mob lynching and cow vigilantism to the apex court’s notice.

The apex court had asked parliament to consider enacting a new law to sternly deal with mob lynching and cow vigilantism, warning that such incidents may rise like a “Typhoon-like monster” across the country.

The top court had said that it was the duty of the states to strive and promote fraternity amongst all citizens, as such mob violence was being instigated by intolerance and misinformed by circulation of fake news and false stories.

The apex court had said there was a need to enact a special law as it would instill a sense of fear for law amongst those who involve themselves in mob lynching. It had said it was the duty of state governments to ensure law and order in the society, besides ensuring that the rule of law prevailed.

In September 2018, the Supreme Court asked all states and the Centre to comply with its order on mob lynching and cow vigilantism. It had noted that “mobocracy” cannot be allowed in a democracy.

Since then, only the Manipur government has enacted a special law to tackle mob lynching, while the Madhya Pradesh cabinet has approved a law against cow vigilantism, but the law hasn’t been passed. The Rajasthan government has also stated its intention to legislate a special Act to tackle mob lynching and caste-based honour killing, but hasn’t moved forward on the proposal.

Notably, the UP state law commission took suo motu cognisance of the rise in mob lynchings and submitted a report to chief minister Yogi Adityanath on how to tackle the issue. The report also contained a draft law to tackle mob lynchings. The commission’s chairman noted that a special law would be necessary to prevent India from becoming a “Republic of Lyncherdom”. 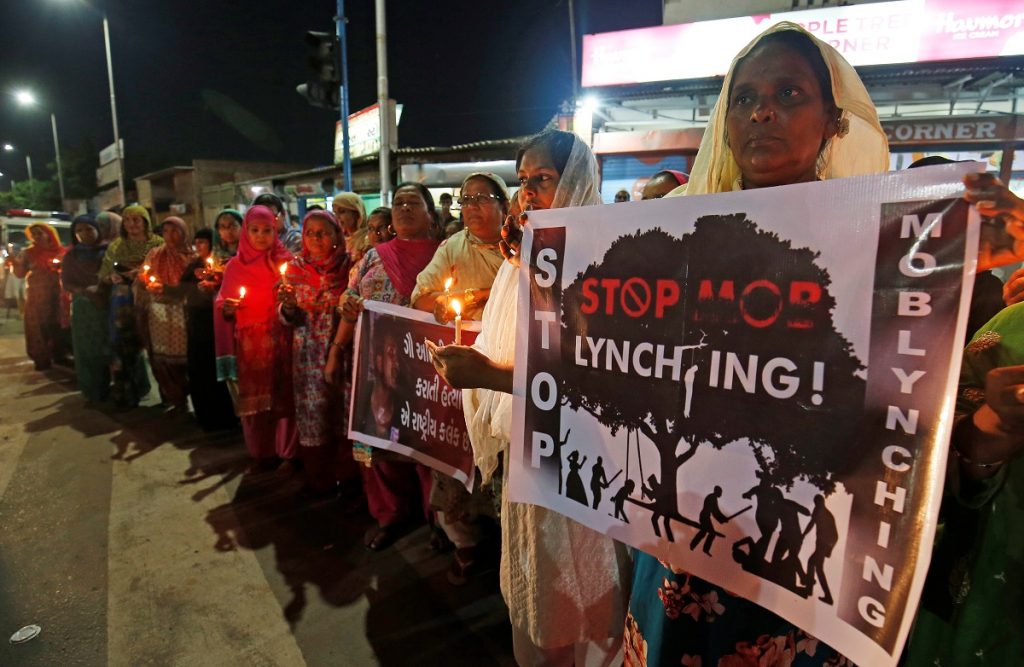 Representative Image of women holding placards and candles during a protest against the recent mob lynchings across the country, in Ahmedabad, India, June 27, 2019. Photo: REUTERS/Amit Dave

Celebrities, artists and prominent personalities speak out against lynching

Over the past week, a group of 49 eminent citizens such as directors Mani Ratnam, Shyam Benegal and Anurag Kashyap and historian Ram Guha, wrote to Prime Minister Narendra Modi, asking him to curb all incidents of mob violence. They said the chant ‘Jai Shri Ram’ has turned into a provocative cry of war.

This was followed on Friday by a counter statement by 61 celebrities, who criticised the signatories of the first letter for ‘selective outrage’. This second letter was signed by film personalities like Vivek Agnihotri, Prasoon Joshi, Kangana Ranaut and Madhur Bhandarkar among others. They claimed that those who had raised their concern over lynchings did not speak up when tribals were victims of Naxalism.