The National Campaign Against Torture has pointed out that several IPC sections dealing with torture need changes. 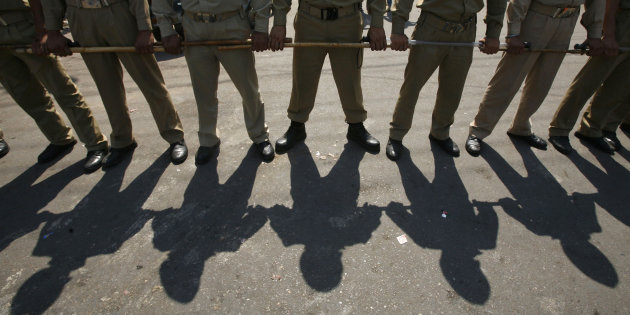 A report by the People’s Union for Democratic Rights (PUDR) has once again drawn our attention to the lack of transparency and inadequate practices of accountability for custodial deaths. Photo: Reuters

New Delhi: Though Union home minister Amit Shah stated last year that “The era of third degree is gone. Use forensics as evidence to nail criminals”, his ministry’s Committee for Reforms in Criminal Laws has excluded torture from its agenda. Flagging the issue, the National Campaign Against Torture (NCAT) has stated that “it is a matter of grave concern as torture adversely affects the entire criminal justice system”.

“Union Home Minister Amit Shah while addressing the 29th Foundation Day of the Bureau of Police Research and Development on 29 August 2019 stated, ‘The era of third degree is gone. Use forensics as evidence to nail criminals’ and he called for a nationwide discussion on amendments needed in the Indian Penal Code and the Criminal Procedure Code to address the same.”

However, the MHA’s actions do not match Shah’s words. As Chakma said, “the Committee for Reforms in Criminal Laws set by the MHA has failed to include the issue of torture in its questionnaires for the First and Second Consultations on Substantive Criminal Law. It is a matter of grave concern as torture adversely affects the entire criminal justice system.”

The NCAT statement also highlighted the high incidence of torture and custodies deaths and rapes in the country. It pointed out that the National Human Rights Commission recorded 35,554 cases of custodial deaths/rapes – including 31,779 cases in judicial custody and 3,775 cases in police custody – between 1994-1995 and 2018-2019.

It said Section 320 pertaining to ‘grievous hurt’ excludes many elements of ‘physical torture’ which are routinely perpetrated and this includes food deprivation or forcible feeding with spoiled food, animal or human excreta; electric shock; water boarding, insertion of foreign objects into the sex organ or rectum, or electrical torture of the genitals.

Though these are severe torture methods they do not constitute offences under ‘grievous hurt’.

`Mental torture not defined under IPC’

The statement said, similarly, ‘mental torture’ by the public servants is not defined under the IPC. This despite the Supreme Court stating in Arvinder Singh Bagga vs State of UP in October 1994 that “torture is not merely physical but may even consist of mental and psychological torture calculated to create fright to submit to the demands of the police”.

Noting that Section 3 of the Domestic Violence Act of 2005 recognises ‘mental torture’, the NCAT argued that “if the ‘mental torture’ within the confines of homes can be penalised, there is no justification for not criminalising ‘mental torture’ perpetrated within the premises of police stations, prisons or any other place of detention or interrogation.”

It added that “post-traumatic stress disorder (PTSD) and many other psychological consequences suffered by the torture survivors are being treated by medical professionals across the world including India.”

No justification for not punishing public servants for cruelty

Here too, it said, the Supreme Court in its judgement in Mehmood Nayyar Azam vs State of Chhattisgarh had defined ‘inhuman and degrading treatment’ to ‘cover such acts which have been inflicted with an intention to cause physical suffering or severe mental pain .. and a treatment that is inflicted that causes humiliation and compels a person to act against his will or conscience’.

The campaign said while Section 498-A of IPC penalises “cruelty” towards woman, Section 4(1) of the Scheduled Castes and the Scheduled Tribes (Prevention of Atrocities) Amendment Act, 2015  defines a number of acts which are not physical torture but cruel, inhuman and degrading treatment.

It argued that if national laws penalise cruel, inhuman or degrading treatment or punishment by private persons, there is no justification for not criminalising the same when committed by public servants.

As for Sections 330 and 331 of the IPC, which define the purpose of causing of hurt or grievous hurt, NCAT said they exclude discrimination despite Article 15 of the constitution prohibiting discrimination on grounds “of religion, race, caste, sex, place of birth or any of them”.

The campaign said Section 4(b) of the Prevention of Torture Bill, 2010 passed by Lok Sabha in 2010 too referred to torture “on the ground of his religion, race, place of birth, residence, language, caste or community or any other ground whatsoever” and so there was a need for amending the sections.

Torture has been studied, debated in detail

Also, it said, three anti-torture Bills have been examined by the Centre and India has repeatedly assured both the parliament and the United Nations that it would criminalise torture and ratify the United Nations Convention Against Torture and other Cruel, Inhuman or Degrading Treatment of Punishment (UNCAT).

However, these assurances have not been kept. NCAT recalled how the then foreign secretary had in 2015-16 stated before the Parliamentary Committee on Government Assurances (2015-2016) of the 16th Lok Sabha that this “does not reflect well on the Government”.

Recommendations for Committee for Reforms in Criminal Laws

In light of these facts, NCAT has recommended that the reforms panel make essential changes to the relevant sections of IPC for providing punishment for torture and inhuman treatment.

Chakma cautioned that “the failure of the Committee for Reforms in Criminal Laws to recommend specific provisions for criminalisation of third degree torture would make the Committee itself redundant”.