During the cross-examination at the trial for the criminal defamation complaint that the former minister filed against journalist Priya Ramani, Akbar said he had no recollection of his meeting with her at a hotel in Bombay in 1993. 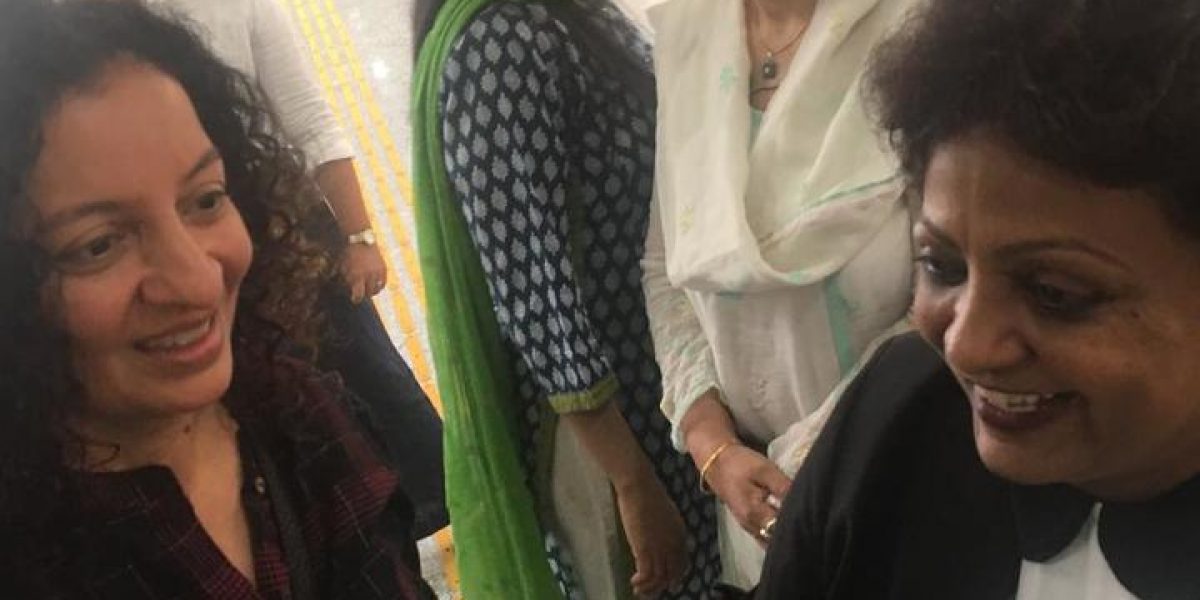 Priya Ramani with her counsel, Rebecca John, outside the court room where former minister of state M.J. Akbar deposed and was cross-examined in the case of criminal defamation he has filed against Ramani for her allegation that he was a sexual harasser. Credit: The Wire

New Delhi: BJP MP from Rajya Sabha and former editor M.J. Akbar took the stand at a district court in Delhi today. He has accused journalist Priya Ramani of defaming him by alleging he had sexually harassed women.

In October 2018, at the height of India’s #MeToo phenomenon, Ramani had tweeted an old piece she had written, and said that some portions of it were about Akbar. “I began this piece with my MJ Akbar story. Never named him because he didn’t “do” anything. Lots of women have worse stories about this predator—maybe they’ll share. #ulti,” she tweeted.

This triggered a number of women to come forward with on-the-record allegations of rape and sexual harassment by Akbar. Journalist Pallavi Gogoi wrote a piece in the Washington Post saying, “I was raped by M.J. Akbar.” Ghazala Wahab published a frightening account of his sexual assault on her, in The Wire. Shutapa Paul spoke about Akbar’s advances to her, thanking Ramani for coming out with her story. Majlie de Puy Kamp spoke to the Huffington Post about how she, too, was harassed by Akbar in 2007.

I hoped it would change his line of conversation with me. Since I’m interested in politics, he said, I should give up on having a personal life. I’m no Cleopatra but he liked sitting and looking at me, he said. #MeToo #MJAkbar 11/n

Despite the raft of accusations by women who identified themselves as victims, Akbar has chosen to go only after Ramani, for her single tweet. In court today he said, “The allegations made are false, however in order to protect my reputation, I sought the justice of this court.”

Ramani has pleaded not guilty. Her counsel, Rebecca Mammen John, told the court that the “truth is our defence, and this was done in public interest.”

Though several journalists turned up to extend support to Ramani, Akbar was accompanied only by a large number of lawyers and security guards but no one from his party, the BJP.

Akbar’s reputation on which he claims defamation

The hearing began soon after 10 am on Saturday, with Akbar’s oath to speak the truth during the trial. His counsel, Geeta Luthra, began asking him questions about his achievements. They were drafted into his statement. Luthra and her team also dictated parts of the statement to the stenographers who were typing it out.

Akbar began right from his childhood, telling the court that he went to Calcutta Boys School and Presidency College. “After that, at a very young age, I joined the Times of India,” he said and also spoke about his work at Onlooker, the Asian Age, Telegraph and Sunday Guardian.

He proceeded to hand over to the court at least six books written by him with his lawyer then asking him to tell the court, “How were the books received?” To this, Akbar answered, “These books were widely appreciated and praised over the world.”

While talking about his shift from journalism to a career in politics, he said that he was a Rajya Sabha MP, and had joined the BJP in 2014, worked as the party’s national spokesperson and then the “Prime Minister was kind enough to include me in his ministry in 2016 as the Minister of State for External Affairs.”

He said that he chose to then resign as a junior minister after allegations of sexual harassment were made so that he would fight them in his personal capacity.

After nearly an hour of Akbar holding the floor and describing his achievements, Ramani’s counsel stood up to begin her cross-examination.

Before John could finish this question, Akbar’s counsel Luthra began to make objections. Luthra wanted Akbar to be asked short questions that would elicit yes or no replies and that the court record these in a simple ‘Q and A’ format. John vociferously objected to the petitioner’s counsel telling her how to conduct her own cross-examination and appealed to the judge many times to control the proceedings. Despite requests by the judge, Luthra interjected at virtually every question.

After Luthra’s persistent objections to this question, John turned to her and said, “The whole world is watching this trial.” Luthra replied, “It is your client on trial.” John then said, “Yes, that is why it is my right to cross-examine.”

Akbar does not recall incidents

John then moved on and asked Akbar about an incident in 2003 when the Delhi High Court convicted him for “deliberately falsely reporting” an issue. Akbar had published an apology in the Asian Age newspaper at the time and had paid a court-ordered fine.

“I don’t recall,” said Akbar, once the lawyers stopped arguing amongst themselves.

John then asked Akbar about Ramani coming to meet him at the Oberoi several years ago, when she was looking for a job at the Asian Age. Akbar was the editor of the newspaper at that time and a friend had dropped Ramani off at the hotel.

Luthra again objected, triggering yet another argument between the two counsels, but Akbar finally replied to this question too, saying: “I don’t recall.”

John protested the interruptions from Akbar’s counsel many times: “These interjections cannot go on. This is not going to be an easy trial.”

She then addressed the judge and said: “If your honour cannot provide me with an atmosphere for a trial… I plead truth as my defence, in public interest… I’m asking your honour to control the counsel.” She addressed Luthra and her juniors to saying, “Don’t muzzle me. It will get personal. This is a deeply personal struggle.”

The judge at one point then reminded Akbar’s counsel: “If convicted, the accused can go to jail for two years. This is a serious case. Let her defend herself.”