'Fifteen Murderers Are Roaming Around in Manipur': Supreme Court Judge to CBI

The CBI had been misleading the Supreme Court on the reasons behind the delays in investigating alleged fake encounters. 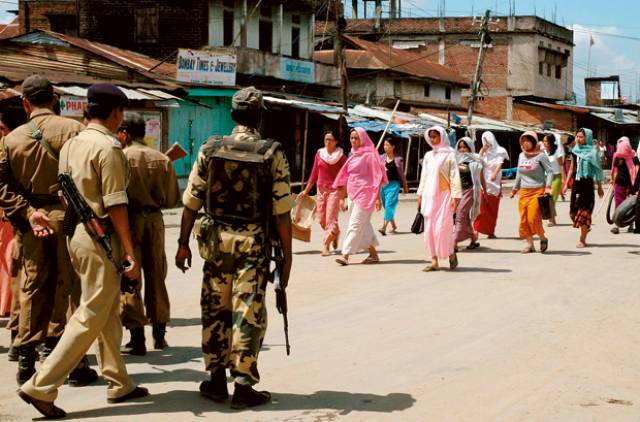 New Delhi: The Centre and the Central Bureau of Investigation were exposed on Monday in the Supreme Court for delays they created themselves in investigating 1,528 cases of alleged fake encounters in Manipur. In July 2016, the Supreme Court had passed orders on conducting investigations into 1,528 alleged fake encounters. As of Monday morning, the CBI has filed just two chargesheets.

“How many people are accused in the two chargesheets you have filed?” Justice Madan B. Lokur asked CBI director Alok Kumar, who had been summoned to the court on Monday.

Kumar informed the court that there are 15 accused in these two cases, of which 14 have been charged for murder under Section 302 of the Indian Penal Code.

“Therefore 15 murders are roaming around Manipur,” remarked Justice Lokur wryly. “What will happen to society?”

On Friday last week, the judges had been displeased with the Centre’s repeated excuses for inaction, and had summoned the CBI’s director, its highest officer, to the court on Monday. Friday’s court hearing saw Justice Lokur raising his voice and strongly disagreeing with the government’s excuses.

On Monday, the bench asked the Centre why they had not made any arrests and why the accused were moving around freely in Manipur.

Menaka Guruswamy, who has been appointed amicus curiae by the court in this case, raised the issue of the impropriety of this situation, where those accused and charged for murder are in fact enjoying unhindered movement. “Over time, these men have all been promoted. While the victims are from a different strata of society completely. What about the chance of the accused having influence over the investigation or tampering? Some notice needs to be taken.”

CBI misled court on the layers of investigations

On Friday last week, Additional Solicitor General (ASG) Maninder Singh, relayed for the court an extensive multi-layer process which he said is the process for CBI investigations, according to their official manual.

He had presented nearly ten layers of scrutiny, which he said could end only with the CBI director. He said that this is the process even in cases of murder.

This triggered the judges to suggest that the CBI should instead get all these ten officials to sit around one table, for a few days, and pass the files around and clear the cases. The ASG’s protests led the bench to summon the CBI’s director.

But on Monday, Guruswamy presented Section 19 of the CBI manual to the judges in order to fact-check the ASG’s claims.

It was then plain to the bench that the manual did not prescribe these layers.

“You’re right,” said CBI’s Alok Kumar to the bench. He said the layers were only an “internal arrangement” but that the CBI could take a call and decrease the number of layers.

Justice U.U. Lalit pointed out that in fact, according to the CBI manual, there were only about two or three layers of scrutiny required. And the manual allowed for cases to be finalised at the level of superintendent of police. Furthermore, the official incharge of the special investigation team was appointed at the DIG rank, and he has now been promoted to joint director, which is of the IG rank. So the investigating team was more than qualified to clear the files without having to wait for the director to scrutinise them.

Moreover, the cases which the CBI was investigating had already seen inquiries by various courts, by the National Human Rights Commission and so on.

The high profile nature of Monday’s hearing – with the CBI’s director on his feet for over an hour, trying to answer the bench’s questions – meant that the Attorney General of India, K.K. Venugopal, was also in court to argue for the Centre.

He didn’t argue very long, as Justice Lokur confronted him with certain facts.

“You need to know this – when the FIRs were first filed, they were filed against the victims themselves,” said Justice Lokur, to Venugopal.

“Against the victim?” asked Venugopal. “Unbelievable,” he said, and shook his head.

Guruswamy then reminded the court that these FIRs were in fact simply “re-registered and re-numbered” versions of the original FIRs which had targeted the very victims of these alleged extra-judicial killings.

The Wire reported on these details in May, detailing how the CBI was filing FIRs against “unknown persons” and was also naming victims as the accused in their own cases.

Chargesheets only in two cases

The CBI’s director also laid out a timeline for the court on their investigations.

Kumar said that the 52 cases which the court had initially shortlisted for investigation became 41 cases with 86 victims, as some cases were found unfit and fell away.

“By your reasonable estimate, these cases wont see light until at least March 2019,” said Justice Lalit.