While raising questions over some charges pressed against Ashish Mishra, the court said he was entitled to bail as he had appeared before the police when summoned and a charge-sheet was already filed in the case. 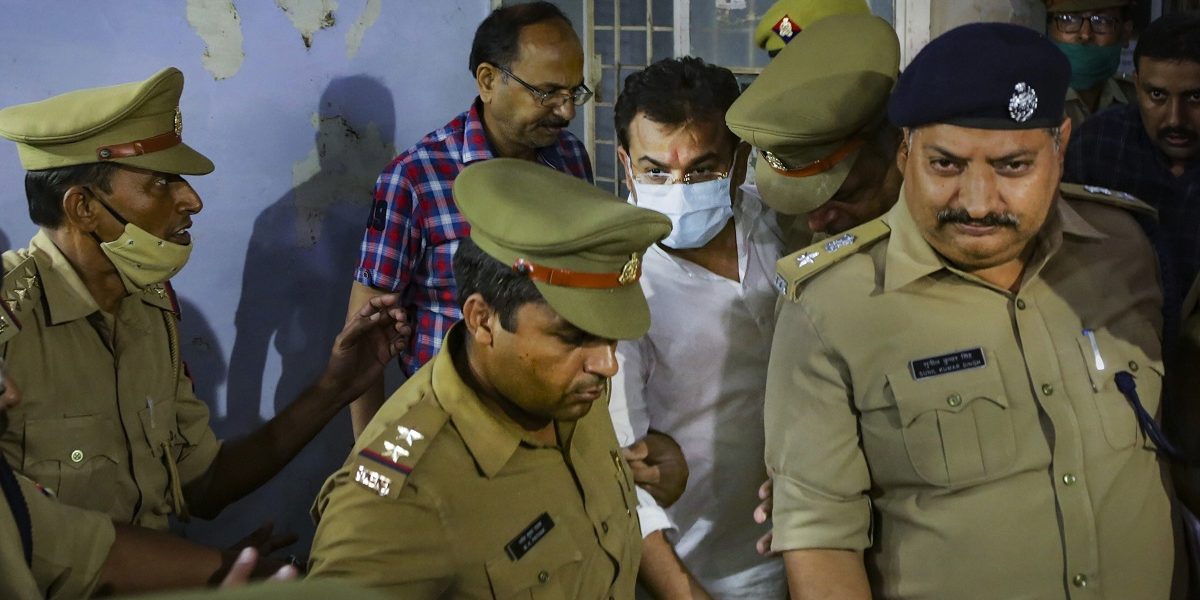 Ashish Mishra being taken from the crime branch office to be produced before a magistrate, in Lakhimpur Kheri, October 9, 2021. Mishra was arrested in connection with the Lakhimpur Kheri violence case. Photo: PTI

New Delhi: Union minister Ajay Mishra’s son, Ashish Mishra, who is accused in the Lakhimpur Kheri violence case, was granted bail by the Allahabad high court on Thursday, February 10 – the day when Uttar Pradesh voted in 58 assembly seats in the first phase of seven-phase elections. Discussions are underway among farmers’ unions to challenge the bail order in the Supreme Court.

Raising questions on some charges pressed against Ashish Mishra, the court said the accused was entitled to bail as he had appeared before the investigating officer when summoned and a charge-sheet had already been filed in the case.

Ashish Mishra was arrested on October 10, 2021 after opposition parties, farmers’ unions and civil society organisations mounted pressure on the Yogi Adityanath government for his arrest. He is being prosecuted for his alleged role in the killing of four farmers and a local reporter Raman Kashyap in Tikunia, Lakhimpur Kheri, during a protest against the three controversial farm laws on October 3, 2021.

Soon after Mishra was granted bail, farmers’ unions went into a huddle to discuss their future course of action, especially with regard to challenging the bail order in the Supreme Court.

President of the Lakhimpur Kheri division of the Sanyukt Kisan Morcha (SKM), a coalition of farmers’ unions, Dilbag Singh has told The Wire that he is holding meetings with the families of the deceased farmers.

He added that during the bail hearing, several lawyers were hired to defend the minister’s son while their side’s arguments were not heard properly. One of the counsel for the aggrieved farmers, Aman Jhawar, has said that during the bail hearing on January 18, his full argument could not be heard by the court due to technical difficulties. The hearing was conducted online due to COVID-19 restrictions.

After reserving the order, the court finally granted Ashish Mishra bail on Thursday, February 10 – the same day when the first phase of elections took place in Uttar Pradesh.

Pawan Kashyap, brother of Raman Kashyap who lost his life during the incident, has said that his “family’s hopes of getting justice for his brother’s murder are waning”.

“But still, we will not stop fighting,” he told The Wire, adding that being granted bail does not absolve Ashish Mishra of the charges against him. He also said that the “court could have been pressured by the government and those in power”.

Luvepreet’s family too is upset over this development. Nineteen-year-old Luvpreet was the youngest to be killed during the Tikunia incident.

After violence broke out in Tikunia, two BJP workers and a driver were also killed. This case is being investigated separately.

Satnam Singh, Luvpreet’s father, said that it is sad that while Mishra – accused of killing farmers – has secured bail, the farmers arrested for the murders that took place afterward still remain in jail. He too suspects that Ashish Mishra has been “granted bail only because he is the son of Ajay Mishra ‘Teni'”, a junior minister in Union home ministry, headed by Amit Shah.

The farmers in the area, he said, are angered by this development. “Farmers in rural belts can make or break an election. They are already angry with the BJP government, and now this,” he added.

He hopes that he will get justice for his son, whose only fault, he says, was that he participated in a protest against the government. He urges the Yogi Adityanath government, which handles the prosecution in the case, to challenge Mishra’s bail order while stating that SKM may also challenge it in the Supreme Court.

The high court, while granting bail to Mishra, raised questions about some charges under which he had been booked by the police, one of which was his role in firing at the protestors.

The prosecution, led by an advocate of the Adityanath’s government, accused Mishra of inciting the SUV driver to run over the farmers. However, the court said that the driver along with two others (referring to the BJP workers) had been killed by the protestors. The court said it “cannot shut its eyes to the killing of three persons in the Thar SUV”.

The Special Investigation Team (SIT) attempts to recreate the sequence of events leading to the incident in Uttar Pradesh’s Tikonia village as part of their ongoing investigation, in Lakhimpur Kheri, Thursday, Oct. 14, 2021. Photo: PTI

“The photographs clearly revealed the brutality of the protestor,” the court said, adding that the organisers of the protest must help the police in finding their killers.

The court was of the view that Mishra was entitled to bail as he appeared before the investigating officer (IO) when he was called and a charge-sheet had already been filed against him.

Sukhwinder Singh, the father of another deceased farmer Gurvinder Singh, said that Ashish Mishra was arrested only after a “lot of pressure was mounted on the government”.

“Now he will soon be out on bail. What about our justice? PM Modi keeps attacking the Congress for the 1984 anti-Sikh riots, but why is he closing his eyes to what his government is doing to us?” he asked.

It was only after videos showing an SUV ramming into the farmers at a speed and crushing them caused an uproar that Ashish Mishra was arrested on October 10, 2021.

Singh further has told The Wire that an application was filed by the prosecution on January 19 for rehearing Ashish Mishra’s bail, but the court had not listed it yet. “We plan to oppose the bail with all our might,” he added.

The opposition which had earlier made this into a big issue – with Samajwadi Party’s Akhilesh Yadav and Congress’s Priyanka Gandhi Vadra just a few months before the polls were to start – is again attacking the BJP government in the state over Mishra’s bail.

While SP’s Akhilesh Yadav has been saying that the “UP government did not do its job”, O.P. Rajbhar of the Suheldev Bharatiya Samaj Party (SBSP), which is in alliance with SP, took it a step further to say that the bail was given at the beginning of the UP polls “with a view to win votes”.

“The BJP is afraid that it is going to lose the elections this time. So, it is trying to woo Brahmins by giving Mishra a bail,” he said.

Curiously, the bail order does not contain two significant IPC Sections of 120 (criminal conspiracy) and 302 (Punishment for Murder), attributed to a technical error, which will be corrected soon.

Ajay Mishra ‘Teni’, who was in Lakhimpur Kheri for the BJP’s election campaign on Friday, did not answer the questions posed by journalists relating to his son’s bail, but only smiled.

Balveer Singh, an SKM member of the Lakhimpur Kheri unit, called out Teni over this, adding that he is smiling at the media because “his son got bail even after the killing a journalist [referring to Raman Kashyap]”.

He added that the killings of the BJP workers and the driver too should be condemned, adding that “incitement from Mishra was the reason though”.

In January, a 5,000-page charge-sheet was filed by the special investigation team (SIT).

The All India Kisan Mazdoor Sabha (AIKMS) while demanding for the dismissal of Mishra’s bail order has said that the bail order is not only a “gross miscarriage of justice” but has also “shaken the faith and confidence of the nation in expecting justice from courts of law in matters when people in power commit barbaric crimes on people with support from the police”.

The court, while granting bail to Mishra, also said that there is a “possibility” that the driver of the vehicle (of the SUV) tried to speed the vehicle to “save himself” since thousands of protesters were gathered at the site as told by witnesses.