The petition says that the photograph serves no additional purpose or public interest, and is instead aims to posit India's vaccination drive as a 'one-man show.' 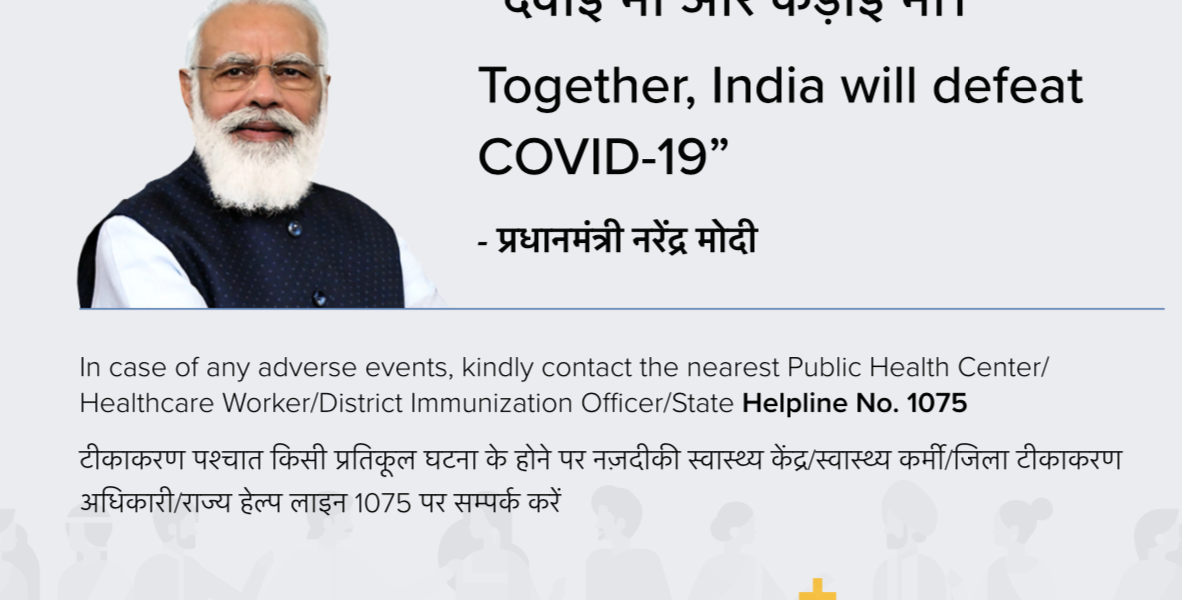 New Delhi: The Kerala high court has sought responses from the Union and Kerala governments on a petition challenging the inclusion of Prime Minister Narendra Modi’s photograph on COVID-19 vaccination certificates.

A bench of Justice P.B. Suresh Kumar admitted a petition filed by Right to Information activist who expressed concern that the national campaign against COVID-19 was being converted into a media campaign for Modi, reported Bar and Bench.

Bar and Bench has listed out the following concerns that the petition sought to highlight.

1. The petition says that the photograph serves no additional purpose or public interest, seeing that the person receiving the certificate has already been vaccinated and is therefore not in need of additional motivation.

“Further messaging in a certificate is no more than ‘preaching to the converted,’” the petition stated.

In the recent Monsoon Session of the parliament, the Union government defended this decision, saying that the prime minister’s image, along with his words, help create awareness on COVID-19-appropriate behaviour.

Minister of State for Health Bharati Pravin Pawar said in a written reply to the Rajya Sabha that the formats of COVID-19 vaccination certificates being issued from CoWIN are “standardised and conform to the evolving WHO guidance on verifiable inoculation certificates.”

As The Wire has analysed, India is perhaps the only country so far whose leader is using vaccination certificates to “promote his own politics and cult of personality”. But the Modi government is having none of that.

“Given the context of the pandemic, its evolving nature and the fact that following of Covid-appropriate behaviours has emerged as one of the most critical measures for preventing the spread of disease,” Pawar said.

2. The petitioner pointed out that because he got his shots at a private hospital, by paying for them, he has the right to get a certificate without the prime minister’s photo.

Shots at government hospitals are free.

3. The petitioner has also said that he did not expressly consent to his personal details appearing on the certificate. The presence of such details, including a person’s medical records, are a matter of concern especially now that the government has kickstarted plans for a health ID that seeks to collate such data and for which, CoWIN registrations on the basis of Aadhaar are already and illegally being considered consensual registrations.

4. The petition also notes that the photograph attempts to posit India’s vaccination drive as a “a one-man show, a propaganda to project an individual at State expense as evidenced by the face of the PM in banners, posters, government websites, the COWIN and Aarogya Setu platforms, and now, in vaccination certificates.”

“This shrill messaging is affecting his autonomy judgment and wellbeing and he ought to be able to say “NO” at some point,” the plea said.

5. The petition also notes that the recipient of the certificate is being held like a captive audience and has no choice in the matter. The petitioner points out that the free speech right protected by Article 19 of the constitution offers safeguard against compulsory and forced listening.

6. Importantly, the petitioner also points out that Modi is the leader of a political party as well, and a government message centred around a leader like the prime minister is bound to affect one’s independent choice when it comes to voting.

Before the West Bengal assembly election, the Election Commission had sought the health ministry’s response on the “factual position” on the use of Modi’s photo on vaccination certificates, days after the Trinamool Congress had registered a complaint saying it violated the model code of conduct.

Later, it had ordered that vaccination certificates issued in the then poll-bound states of West Bengal, Assam, Tamil Nadu and Kerala and the Union Territory of Pondicherry will not carry Modi’s photograph.

Bar and Bench notes that according to the guidelines laid down by the Supreme Court for campaigns using public money in Common Cause v. Union of India, no individual can be credited for the launching of an initiative or be celebrated for achievements of a certain policy of the State on government expense.