The new set of rules defined who was qualified to issue such certificates, the time frame within which they can be issued and the punishment awarded to the concerned official who fails to furnish them on time. 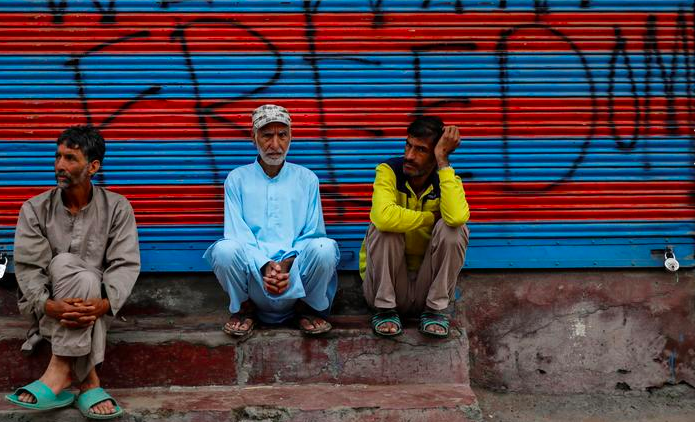 Kashmiri men wait before Eid-al-Adha prayers during restrictions after the scrapping of the special constitutional status for Kashmir by the government, in Srinagar, August 12, 2019. Photo: Reuters/Danish Siddiqui

Srinagar: Any tehsildar in Jammu and Kashmir who fails to issue a domicile certificate to applicants on time may attract punishment of having to forfeit up to Rs 50,000 from their salary.

The new set of rules called Jammu and Kashmir Grant of Domicile Certificate (Procedure) Rules 2020 issued by the administration in the Union Territory of Jammu and Kashmir on Monday define who was qualified to be a competent authority to issue such certificate, the time frame within which the domicile can be issued and also, surprisingly, the punishment awarded to the concerned official who fails to furnish the domicile on time.

The order has come just a month after the central government redefined the Hereditary State Subject laws in the Union territory, sparking fears of an accelerated pace at which non-locals will settle in Kashmir, complicating the nature of the conflict and undermining the demographic make-up in the UT.

The rules also reaffirm who can apply for a domicile certificate.

As per the order, individuals who have resided in J&K for 15 years or have studied for seven years or appeared in examinations for class 10th or 12th can be eligible for the grant of a domicile certificate. The eligibility also extends to West Pakistan refugees registered as migrants under the erstwhile state’s Relief and Rehabilitation Commission.

“The new law is a major departure from the earlier position of law, under Article 35A of the Indian constitution and Section 6 of J&K constitution that empowered the J&K assembly to define a permanent resident of Jammu & Kashmir,” said Mirza Saaib Beg, a Kashmiri lawyer at the Blavatnik School of Government at the University of Oxford.

“A permanent resident has now been replaced with “domicile” with retrospective effect. It is legally questionable if such a power exists in the parent Act itself. New classes of people have been made eligible for domicile status including migrants, central government employees, Indian armed forces personnel and their children who meet the eligibility criteria.”

The new rules have empowered a tehsildar to issue such certificate in most cases and Relief and Rehabilitation Commissioner in the case of migrants. There are provisions for nominating higher officials as application categories expand. The applicant can also both submit the application and receive the certificate electronically.

Experts say that previously such domicile certificates were issued by officers of the level of deputy commissioners and it involved passing through a labyrinth of procedures and shuffling back and forth between many offices. In that sense, it is feared, the new rules are intended to bypass the byzantine bureaucracy and offer an accelerated path towards acquiring the domicile for non-locals.

“For non-Kashmiris, it has been made easy to get domicile certificate. They just need a mere ration card or a document of proof of residence and they can even apply for and receive the certificate electronically,” said Muhammad Tahir, who teaches at the School of Law and Government, Dublin City University, Ireland and specialises in the Kashmir conflict. “On the other hand, a Kashmiri must produce Permanent Residence Certificate which used to be issued by DC. To get a PRC, one needed to submit an affidavit and a host of documents which would take months to prepare.”

The rules also make provisions for filing an appeal before the appellate authority in case the domicile certificate is “neither issued nor rejected” within a period of 15 days. “Provided further that in case the applicant succeeds in his appeal, the Appellate Authority shall direct the competent authority to issue domicile certificate within a period of 7 working days,” the notification, a copy of which was seen by The Wire said. In case the issuing authority fails, the appellate authority is entitled to “recover an amount of Rs 50,000 from the salary of competent authority.”

“This clause seems a pre-emptive move to undercut any resistance from Kashmiri officials,” Tahir said. “This order, like the revocation of Article 370, is arbitrary, coercive and doesn’t serve Kashmiris.”

The new changes present not only a serious challenge to the demography of the former state but also significantly expand access to state resources. The new orders came months after BJP-led government scrapped a 37-year-old law that permitted the return of J&K residents who fled to Pakistan from 1947 to 1954, using the J&K Reorganisation Act, 2019.

“The existing permanent residents, who are already domiciles of Jammu & Kashmir under a statutorily recognised PRC have to visit their Tehsildar, annex their PRC and obtain a domicile certificate,” Beg said.

“This circular exercise appears to be a verification of domiciled people of Jammu & Kashmir similar to an NRC exercise for JK. It is pertinent to add that in this new arrangement there is no space for a diaspora Kashmiri, whose parents do not have PRC, to obtain domicile without living in the UT for 15 years. PRC has already been held by courts to be a conclusive proof of residence but effectively through this new law, a constitutionally recognised PRC can now serve only evidentiary value and by itself is not a conclusive proof of residence. This begs the question of why there is any requirement of people who are already residents of J&K to prove their residence again?”

The issue of state subject has been a fractious matter in the former state with huge implications for social and political cohesion. The original hereditary state subject rules were defined in 1927 by the erstwhile Dogra court in response to a sustained agitation by Kashmiri Pandits who were apprehensive about losing employment in state service after the then state administrative council embarked on a range of administrative reforms that included overturning Persian as the official language in 1889 and replacing it with Urdu with which Pandits were not very well-versed.

Further reforms included allowing a stream of Punjabi Hindus, who were proficient in Urdu, to populate the ranks of administration. According to the definition enacted in 1927, all persons born and residing in the state before the commencement of the reign of Maharaja Gulab Singh and also all persons who settled therein before the commencement of the year 1885 and have been permanently residing in the country were deemed as state subjects.

It was also decreed that “no person who did not fit the bill would be permitted either employment in the state services or right to purchase agricultural land in the state.”

In 1952 India negotiated a complicated truce with Sheikh Abdullah who had threatened to resign from the constituent assembly, terming the idea of integration with India as, “unrealistic, childish and bordering on lunacy” after former PM Jawaharlal Nehru had attempted, among a host of other things, to extend the jurisdiction of Comptroller and Auditor General (CAG) of India over the former state. As a means to assuage Abdullah, a little known modus vivendi called Delhi agreement was signed into which the Hereditary State Subject definition of 1927 was enshrined.