While several senior activists, politicians and sociologists gained immensely from Justice Sawant's scholarship, it was the youth who he was particularly keen on with interacting. 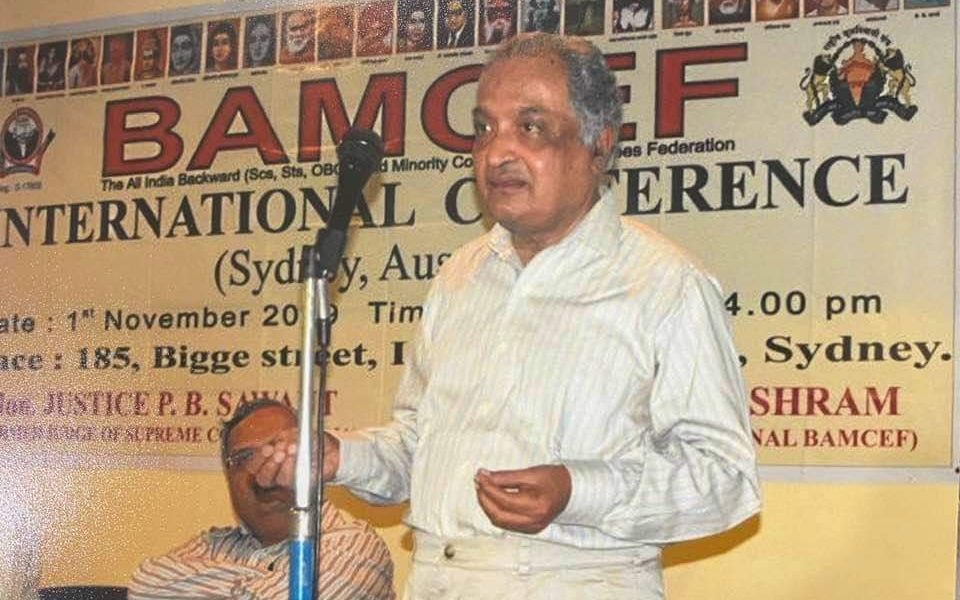 Mumbai: Soon after his retirement from the Supreme Court in 1995, Justice P.B. Sawant began his socio-political journey. The annual convention of the All India Backward and Minority Communities Employees Federation (abbreviated as BAMCEF) was the first such public appearance, but not the only one.

While Justice Sawant went on to attend over 15-16 such BAMCEF national conventions, the 2020 convention being the last one, he also remained committed to a wide range of social movements across the state. “Annihilation of caste was at the heart of such engagements,” recalls D.D. Ambade, national treasurer of BAMCEF.

Justice Sawant, after suffering from several age-related ailments, passed away on February 15 following a cardiac arrest. He was 91. He is survived by his wife, two daughters and a son.

Justice Sawant’s commitment to social issues came from his staunch anti-caste beliefs, Ambade adds. “In the past 25 years, we had invited Justice Sawant several times and he had gracefully accepted the invite each time. His speeches would highlight the concerns of the most marginalised,” Ambade says. The most recent public appearance was a few months ago, when Sawant delivered the inaugural speech at the BAMCEF convention, 2020. “We have numbers on our side, but unfortunately no statesmanship,” Sawant had said in the video recorded message. By numbers he meant members of the Scheduled Castes, Scheduled Tribes and the Other Backward Classes, who constitute over 85% of India’s population.

Also read: The Manusmriti and a Divided Nation, by Justice P.B. Sawant

Justice Sawant rose from the rank of a judicial magistrate to a Supreme Court judge. Before joining the judiciary, he practiced as a lawyer and represented labours and farmers in the state. One could see a seamless transition between Sawant’s pre-judicial, judicial and post-judicial years, says Sanjay Dabhade, a medical practitioner and anti-caste activist based in Pune.

Dabhade, who had known Sawant for several years and had travelled with him on several occasions, says Sawant never shied away from taking a stand on issues, “Even if that meant that his opinion was unpopular.” When the Maratha community in Maharashtra demanded reservations, Sawant provided a nuanced understanding of why the reservation was not tenable under law. “He was a staunch supporter of reservation but he also knew that the demands made by the (Maratha) community needs to be understood deeply from a sociological point of view,” Dabhade recalls.

Sawant was one of the rare judges who followed the principles of (Dr B.R.) Ambedkar, (Jotiba) Phule and Shahu (Maharaj), says social activist Dr Baba Adhav. Sawant and Adhav, both 91 years old, had been friends for several decades. “I have lost a friend, guide and philosopher now. I won’t be able to express in words what this loss means to me,” Adhav says.

Sawant was also the president of Mahatma Phule Samata Pratishthan for several years. Supreme Court lawyer Disha Wadekar says he was a one-of-a-kind judge and a staunch follower of Jotiba and Savitribai Phule – “Satyashodhak judge,” she calls him. Adhav says he was a ‘Bahujan Samajwadi’, who lived for justice and equality all through his life.

Adhav recalls Sawant’s participation in the peasant movement in the state. “He joined the Peasant and Workers Party (PWP) and continued to be their advisor for a very long time. Old and young alike, everyone sought his social and legal understanding,” Adhav says. He compares Sawant’s stature with PWP’s founding leader N.D. Patil and Ganpatrao Deshmukh. “Sir [Sawant], Patil and Deshmukh were from a different league altogether. Their unfailing vision is guiding the movement even today,” Adhav points out.

While several senior activists, politicians and sociologists gained immensely from Justice Sawant’s scholarship, it was the youth who he was particularly keen on with interacting. “He looked at the younger generation with a lot of hope. He was always available for discussions and talked to them as an equal. His seniority – both by age and experience – never became a barrier,” recalls Prakash M. Pawar, a Pune-based sociologist. Pawar lived close to Sawant and would frequently visit him for discussions. “There hasn’t been a time when I have returned after a brief interaction. Every conversation was long and I returned feeling richer. That vacuum is difficult to fill,” shares Pawar emotionally. Justice Sawant’s book A Grammar of Democracy, Pawar says, delved deep into the democratic principles and the need to preserve it.

On December 31, 2017, Justice Sawant along with another retired Bombay high court judge, Justice B.G. Kolse-Patil, had convened the Elgar Parishad at Shaniwarwada, a Brahmin bastion in the heart of Pune city. The event later was accused of furthering the outlawed Maoist ideology and several activists, academics and lawyers were arrested by both the Pune police and the National Investigation Agency (NIA). Sawant, who had openly criticised the state for booking activists in a false case, too was harassed by the Pune police. In the first chargesheet filed in the case, the Pune police had allegedly added his statement without having ever recorded it. Expressing his dismay, Sawant had told The Wire how the investigating officer, Shivaji Pawar, had contacted him on the pretext of having an informal chat and had cooked up a story later and added it in the chargesheet.

The Elgar Parishad case, particularly, had made him worry about the erosion of democratic principles in the country. In the recent BAMCEF convention, he said, “No less than 85% of our population is living below the poverty line. They are deprived of their basic human rights. How do we expect them to participate in the governance of this country? The democracy we have is not the regime of ‘of, for and by the people’. Do we have democracy in this country?”

“The answer is in the negative,” he added.