The Day Justice Hosbet Suresh Was Threatened With Arrest

The police’s relentless pursuit of human rights activists in connection with the Bhima Koregaon violence did not spare judges either. 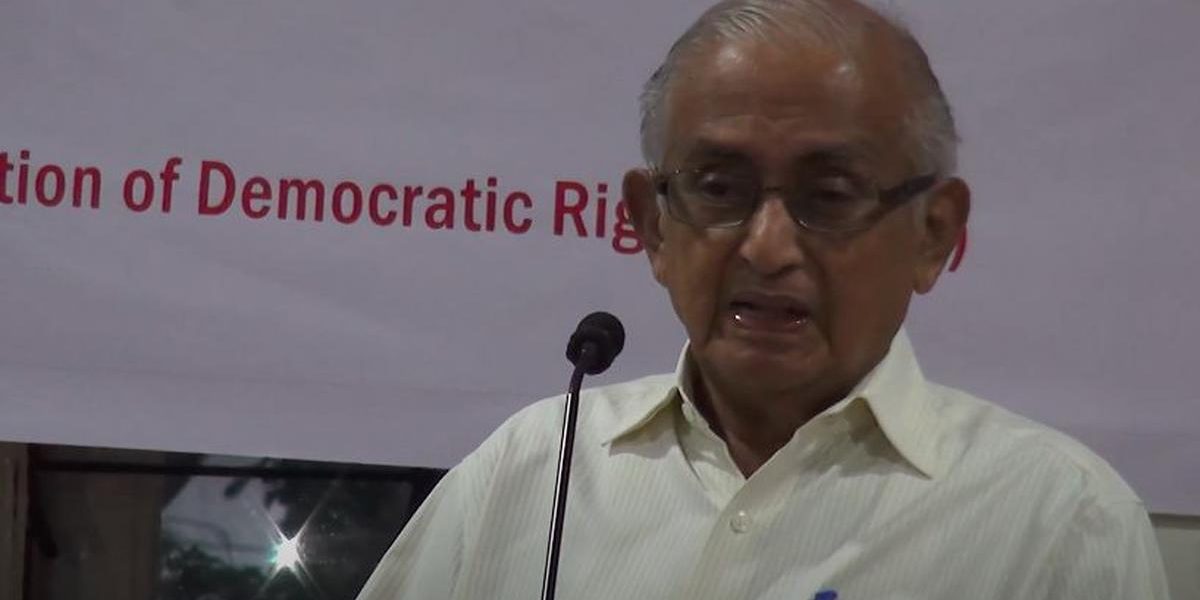 The Bhima Koregaon case, in which 11 prominent human rights activists, lawyers and academics languish behind bars, that too during a pandemic, has now become the template for similar arrests taking place in different parts of the country 2014 under the Narendra Modi-Amit Shah regime.

This is the chronology: An FIR is lodged in a case of violence instigated by right-wing leaders. Those leaders are let scot free. Then random unconnected persons with a common thread of being dissenters, are jailed, trapped in a web of conspiracy theories and a draconian law, the Unlawful Activities Prevention Act, from which the road to freedom seems like a tunnel with no light at the end.

The FIR in the case, pinned the violence that broke out on January 1 and 2, 2018 at Bhima Koregaon on the organisers of the December 31,2017 Elgar Parishad convention held to commemorate the 200th anniversary of the victory of the Mahar soldiers who along with the British army defeated Peshwa rule. In reality, right-wing mobs instigated by Milind Ekbote and Sambhaji Bhide attacked the peaceful Ambedkarite followers and prevented them from converging to pay respects to their victory pillar at Bhima Koregaon. The initial FIRs were lodged against these two leaders and their followers in Pune Rural.

However, the arrests that began on June 6, 2018 were of human rights activists, lawyers, writers and academics, none of whom, except Sudhir Dhawale, had anything to do with the Elgar Parishad. None of those arrested had even a remote connection to the Bhima Koregaon violence on Dalits.

Justice Hosbet Suresh, who passed away peacefully on June 12, had condemned these arrests, particularly that of the three lawyers – Surendra Gadling, Sudha Bharadwaj and Arun Ferreira, all office bearers of the Indian Association of People’s Lawyers (IAPL), of which he was the president. But little did he imagine that his name would get dragged into the case by a police machinery armed with impunity, which would go as far as to threaten to arrest a respected retired judge of the Bombay high court and an internationally acclaimed jurist known for his commitment to justice for the downtrodden and the powerless.

The FIR in which the Bhima Koregaon case is carrying on without any let up, was lodged by one Tushar Damgurde on January 8, 2018, at Vishrambaug police station in Pune City, a full eight days after the Elgar Parishad. Damgurde, a follower of Sambhaji Bhide, named six activist-organisers of the Elgar Parishad in his FIR, but does not name other prominent organisers of the Parishad such as Justice P.B. Sawant (Supreme Court) and Justice B.G. Kolse-Patil (Bombay high court). Damgurde’s FIR accuses the Elgar Parishad of instigating the mobs into violence.

However, in the first five arrests that took place six months later on June 6, 2018, Dhawale was the only one with an actual Elgar Parishad connection. The others, Rona Wilson, Surendra Gadling, Shoma Sen and Mahesh Raut, didn’t. Two months later, on August 28, five more persons were in the dragnet of the Pune police as accused in the Bhima Koregaon case, with two more names added as “suspected” accused, a term with does not exist in criminal law statutes. The case, much along the lines of the infamous conspiracy cases launched by the British colonialists to imprison freedom fighters, has now been taken over by the NIA in January 2020, a full two years after the case was registered by the Pune police.

From the first remand date on June 7, 2018 onwards, court hearings before the Pune sessions court of Special Judge K.D. Vadane in the Bhima Koregaon case would always be jam-packed with lawyers and well-wishers of the accused, a number of press persons and a host of police personnel with public prosecutor Ujwala Pawar.

It was no different on October 21, 2018 when following the refusal of the Supreme Court in the Romila Thapar & Ors V/s State of Maharashtra petition to put a stop to the persecution of activists, bail applications were filed for the August arrestees before Special Judge K.D. Vadne, Pune.

The bail application for Arun Ferreira was being argued by leading criminal lawyer Sudeep Pasbola. In the crowded court room, Pasbola pointed out to the learned judge that the grounds for Ferreira’s arrest were extremely flimsy, that he was accused for being an office bearer of the IAPL, an affiliate of the International Association of People’s Lawyers which was being touted as a Maoist “frontal” organisation by the Pune police to justify the arrests.

Also read: The Judiciary Needs to Be Gently Reminded About the Constitution and Its Key Concepts

Two other office bearers, general secretary Surendra Gadling and vice-president Sudha Bhardwaj too were under arrest in the case. It was pointed out to the judge by Pasbola that the members of IAPL who were arrested were leading lawyers in their own right. To prove to the court that it was a perfectly legitimate organisation, Pasbola emphasised that the national president of the IAPL was a retired judge of Bombay high court, namely Justice Hosbet Suresh.

In response to this argument, while opposing the arguments for bail, the investigation officer in the case, ACP Swargate, Shivaji Pawar declared that they would have no hesitation to arrest Justice Suresh also if their investigation found it necessary. There was utter disbelief and a stunned silence in the court after hearing this proclamation from the witness box by the investigation officer. This became more emphasised when Special Judge Vadane remained silent and did not reprimand the police officer for not only lowering the prestige of a high court judge but also for the impunity with which a police officer could even hold out such a threat in the open court about a highly respected jurist.

This was immediately picked up by the Pune and Mumbai media on October 22, 2018. Unsure of how to break this news while meeting Justice Suresh at a function organised by Majlis at the Asiatic Library in Mumbai the same evening, I found that Justice Suresh had a copy of the Maharashtra Times which had reported the threat of his arrest on the front page. He could not believe that the police could stoop so low, more so because he had such a staunch belief in the rule of law. At the same time he was unfazed at the prospect of the police hounding him and he expressed full readiness to take up the challenge thrown by the Pune police.

When Sabrang magazine interviewed him about his response to the threat of arrest, Justice Suresh expressed greater concern for the way lawyers had been falsely implicated in the Bhima Koregaon case than about anything that could happen to him. He remarked that never before had lawyers been arrested like this, saying that they were being targeted to silence those who speak against the atrocities of the government.

The Pune police, however, did not pursue Justice Suresh after the threat issued in the open court, probably because they had achieved their objective. A week later, on October 26, October 2018, Arun Ferreira’s bail application was rejected, together with those of Vernon Gonsalves and Sudha Bharadwaj by Special Judge Vadane. We can detect a cry of despair in the words of Justice Suresh at the way the case had proceeded when he said, “You cannot imagine how low we have fallen.”

As we all know, the Pune police juggernaut has not stopped with this. What many do not know is that after the threat issued to Justice Suresh, the Pune police went after another retired Supreme Court judge, Justice P.B. Sawant, by landing up at his house in Pune on November 11, 2018. Without informing the judge, who is in his 90s, that his statement was being recorded, the investigating officer went about doing exactly that against all provisions of law.

Not one to keep quiet about police excesses, Justice Sawant lodged his protest. The police machinery brazened it out by arriving back at his home on November 30, 2018 after serving Justice Sawant a notice this time and went ahead to record his statement. Both his statements are now part of the 8,000-page chargesheet filed by the Pune police in the Bhima Koregaon case.

It goes without saying that both Sambhaji Bhide and Milind Ekbote, named in complaints as perpetrators of the violence on January 1 and 2 in Bhima Koregaon, have effectively been erased from public memory and are roaming freely.

Susan Abraham is a practising lawyer whose husband, Vernon Gonsalves, is one of the 11 accused in the Bhima Koregaon case.