Pandit, who was taken into police custody in March last year, died due to “profuse bleeding resulting from multiple injuries”.

Srinagar: In March last year, the custodial death of school teacher Rizwan Asad Pandit from the highway town of Awantipora led to days of protests in Kashmir. Under pressure, the government ordered a magisterial probe into the incident, which was described as a “cold-blooded murder” by Rizwan’s family.

While the inquiry is going nowhere, even 10 months after the incident, on Thursday, the J&K high court closed a Public Interest Litigation (PIL) seeking a probe by the Central Bureau of Investigation into the “killing”.

The court ruled that “there is no public interest involved” in the PIL which demanded a transparent and time-bound investigation into the incident.

In its two-page judgment, the division bench of Justice Ali Mohammad Magrey and Justice Diraj Singh Thakur said: “on a bare perusal of the pleadings on the record, coupled with the nature of the relief sought for, we are satisfied there is no public interest involved in the instant Public Interests Litigation, as claimed by the petitioner.” 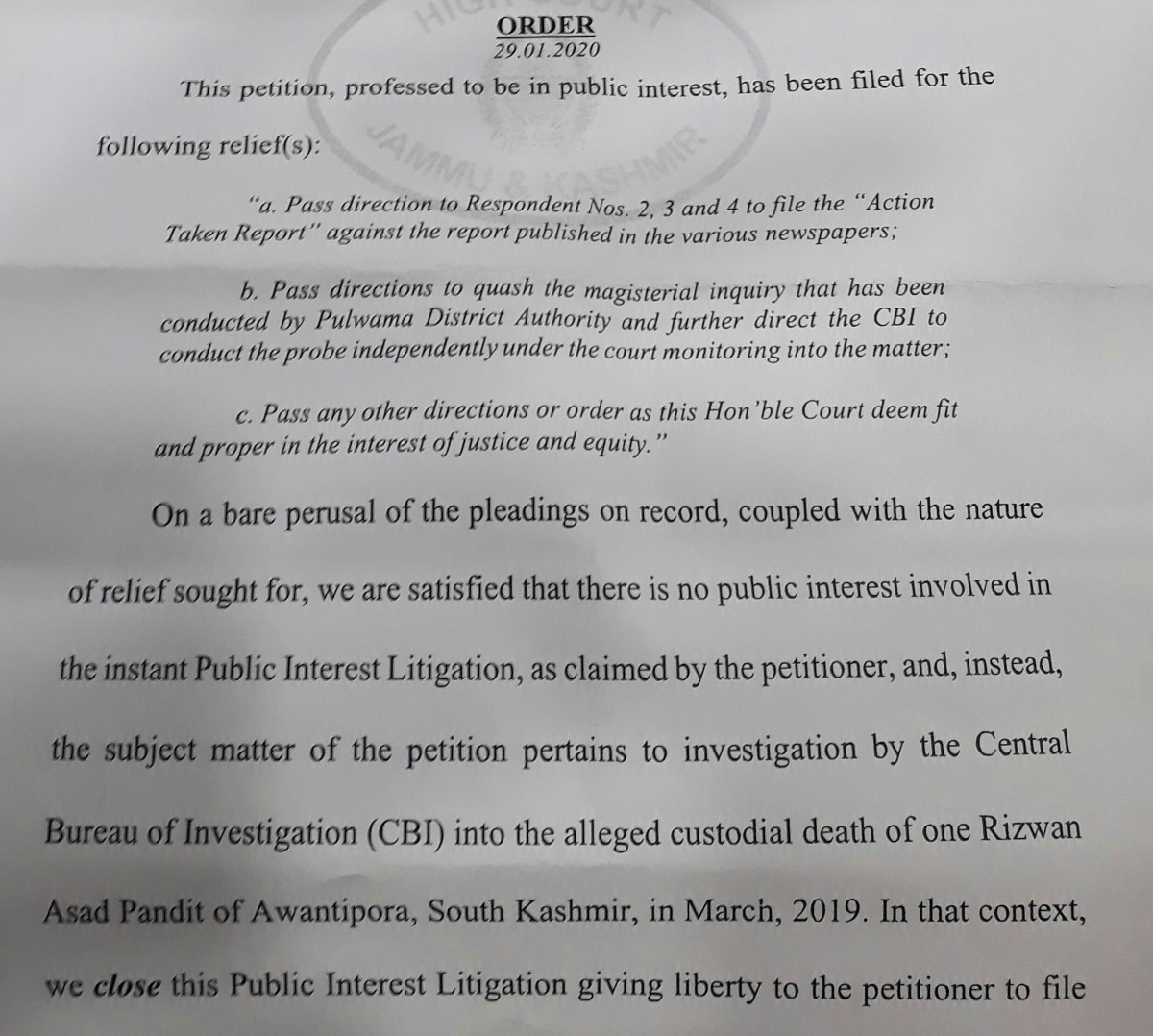 The Anti-Corruption Council of India Trust had filed the PIL in the court in July 2019, on the grounds that Rizwan’s death was a “cold-blooded murder.”

Apart from the CBI probe, the Trust had also sought that the court squash the magisterial probe and issue directions to the secretary of the Union home ministry, J&K home secretary and J&K director general of police to file an Action Taken Report into the killing.

“The subject matter of the petition pertains to the investigation by the CBI into the alleged custodial death of Rizwan Asad. In that context we close this PIL, giving liberty to the petitioner to file appropriate proceedings before an appropriate forum for seeking the relief claimed here in this petition,” reads the judgment.

Describing Rizwan’s death as “cold-blooded murder in the police custody at Srinagar,” the Trust had termed it as a matter of great concern and gross violation of fundamental rights guaranteed under Articles 21 and 22 of the constitution.

“It creates suspicion on the acts of police officials, as after three days of the death (of Rizwan) an FIR was lodged against him for an attempt to escape from the police vehicle on way to a location in Pulwama for searches,” the PIL said.

Questioning the police’s role, the petition said it was “surprising and shocking” that the FIR was not lodged at any of the three main police stations in Pulwama district – Awantipora, Pampore, and Tral – but instead at the Khrew police station.

“The police said that Rizwan was picked up in a militancy-related case registered at Pantha Chowk, but it is unable to convince how the arrest was made two years after the attack in which both the accused militants were killed,” said the PIL.

It contested police claims about timing of the death, saying the police had announced Rizwan’s custodial death on the morning of March 19, but, as per the post mortem report, he had died at least 12 hours before the examination.

The petition had argued for transparent and time-bound investigation by the CBI, saying the fate of “rampant customary magisterial enquires (in Kashmir) is known which have not at all proved helpful for crime detection, especially custodial violence.”

“It is a general notion in the public nowadays that the people do not die in police custody but are killed in police custody,” the Trust said, questioning why the probe was first ordered in Srinagar and then shifted to Pulwama.

“The custodial death occurred in Srinagar which is itself a prima facie and conspiracy on the part of state administration and police officials,” said the petition by the Front, a body of lawyers from Supreme Court and high courts, as per information on its website.

The Trust had also sought a compensation of Rs 50 lakh for the victim’s family, saying the amount shall be recovered from the “erring officials under whose custody Rizwan was killed.”

Thirty-year-old Rizwan was detained by the police for questioning in a “militancy-related case” late on March 17, 2019, during a raid at his Awantipora residence.

On the morning of March 19, police issued a statement saying that “in pursuance of a militancy case investigation, one suspect Rizwan Pandit of Awantipora was in police custody. The said person died in police custody.”

It, however, didn’t mention the cause of death or provide any further details.

A post-graduate in Chemistry, Rizwan was working as a Principal at local private school and also ran a tuition centre in the town. He taught at the government polytechnic college in Awantipora in 2018.

Rizwan had completed MSc in chemistry from Dehradun and was planning to apply for a PhD at Kashmir University days before he was picked up by the police.

The preliminary post-mortem findings had suggested that “profuse bleeding resulting from multiple injuries” could have caused Rizwan’s death.

“Extravasation of blood simulating antemortem bruising could have become the cause of his death. He (Rizwan) had deep wounds on thighs, hips, and abdomen. In such a case there is also a possibility that severe internal bleeding blocks the vessels resulting in kidney failure which results in death,” an official had told The Wire last year. “He also had a hematoma (a solid swelling of clotted blood within the tissues) in his left arm and eye”.

Rizwan’s brother Mubashir Hussain had said that his brother had “multiple horizontal cuts” on both thighs. “The thighs had turned black as if they had been burnt…there were cut on the thighs. He had a swollen and bruised abdomen. Also, his right leg had swollen heavily and it had turned dark red.”

Also read: It Was Jahalat That Killed Both Rizwan Pandit and Aatif Mir

The family had also contested the “escape story”, accusing the police of trying to hush-up the “murder”.

Rizwan’s family said the Trust had independently petitioned the court to seek the CBI probe. “They didn’t approach us,” said Mubashir. “But we aren’t hopeful of getting justice in the killing of my brother. We know nothing will come out of these probes.”

He termed the ongoing magisterial probe as “mere eyewash”. “It was ordered by the government to buy time. All our family members gave their statements before the inquiry officer last year. But has anything been achieved now? No. there is no outcome of the probe even after passing of more than 10 months,” said Mubashir.

An official said the Assistant Commissioner Revenue, Awantipora, who was tasked to conduct the inquiry, was transferred some months ago.

“Though a new officer has replaced him, there is no progress in the probe,” an official said.