As J&K 4G Ban Is Extended, SC Should Adjudicate and Not Wait For Restoration

The Centre could buy more time from the SC because of misplaced hopes that the first anniversary of the ban would make it see reason. 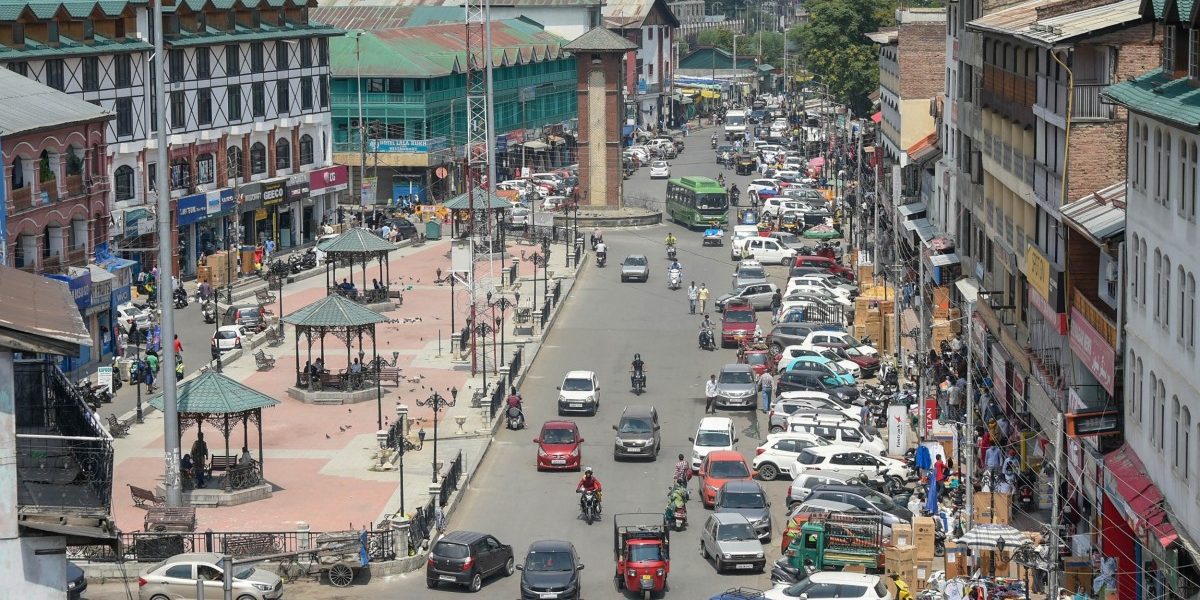 Srinagar's Lal Chowk on July 29, 2020, after some lockdown restrictions were eased before Eid-al-Adha. Photo: PTI

In the contempt petition filed by the Foundation for Media Professionals (FMP) in the Supreme Court, Solicitor General Tushar Mehta, representing the Jammu and Kashmir administration, sought an adjournment on Tuesday till August 7 and secured it without any murmur.

The bench of Justices N.V. Ramana, R. Subhash Reddy and B.R. Gavai found the Centre’s request for “some time” to respond to the FMP’s rejoinder affidavit reasonable, especially when FMP’s senior counsel, Huzefa Ahmadi, had no objection.

As against the bench’s initially chosen date of August 5 for the next hearing, the Centre suggested August 7, in view of the anniversary of Article 370 being read down falling on August 5.  Mehta suggested that home ministry officials would be busy on that day, and may not be in a position to assist him on the matter.

Earlier, Attorney General K.K. Venugopal told the bench that the Centre had to verify the statement reportedly made by J&K Lieutenant Governor G.C. Murmu favouring the restoration of 4G internet services in the union territory.

All these suggested a possibility of a re-think on the part of the Centre coinciding with the first anniversary of J&K’s special status and statehood being scrapped, and the consequent ban on 4G internet services in the union territory.

Wednesday’s order extending the ban till August 19 by the union territory administration citing fears of anti-national activities shows that hopes of 4G restoration by the government could well be misplaced. Indeed, if the proceedings before the Supreme Court are any indication, it could well have been a strategy to buy more time, so as to avoid legal embarrassment of inviting an adverse order from the court on the eve of the anniversary.

In its counter-affidavit, the Centre has claimed that the three-member Special Committee – entrusted with the task of reviewing the need for continuing restrictions on 4G internet services – has complied with the directions contained in the Supreme Court’s judgment in the Anuradha Bhasin case, delivered on May 11.  The Special Committee includes the chief secretary of the J&K administration, Union home secretary and secretary, Department of Telecommunications, Government of India.

The FMP’s contempt petition follows lack of information in the public domain about the functioning of the Special Committee. The Centre in its counter-affidavit has claimed that the Committee held two meetings so far, on May 15 and June 10, but the minutes of the meetings were not annexed with the counter-affidavit.

The  Centre has claimed that in these two meetings, the Special Committee considered all aspects of the situation including prevailing security concerns, impact of denial of 4G services and viability of less restrictive alternatives suggested by the petitioners. In the absence of the minutes of these meetings in the public domain, it is not possible to corroborate these boilerplate assertions, says the Internet Freedom Foundation (IFF), an intervener in the case.

The counter-affidavit states that after its second meeting on June 10, the Special Committee decided that restoration of 4G mobile internet was not desirable at this time and deferred the issue for two months based on a “considered and wide-ranging assessment of the prevailing situation in this sensitive region”. The Special Committee has apparently submitted its report to J&K government. The Centre’s counter-affidavit states that the original report has been placed before the Supreme Court.  The counter-affidavit has been signed by Dharmendra Kumar, deputy secretary (legal and constitution) in the Union Ministry of Home Affairs.

If, according to the Centre, restoration of 4G had to be deferred for two months from June second week, when the Special Committee might have submitted its confidential report, Wednesday’s order giving a definite date for restoration (August 19) makes little sense. Intelligence inputs, according to the union territory administration, suggested rise in anti-national activities and justified apprehensions over misuse of 4G in planning and executing militant acts, propagation of ideologies inimical to the interests of the country, misguiding the youth to join militant  ranks and coordination with handlers across the border to facilitate infiltration. Surely, the administration is not hinting that these apprehensions are likely to dramatically cease or that the number of anti-national activities will begin to fall from August 19.

The Centre has sought to satisfy the Supreme Court that ex facie, no case whatsoever of contempt of court is made out in this matter. As the Supreme Court’s May 11 judgment itself constituted the Special Committee, the Centre found no obligation to notify its constitution separately. After its first meeting on May 15, the Special Committee “decided to obtain further detailed inputs, in regard to the prevailing situation on the ground level, before taking a decision in regard to the possibility of easing the restrictions on 4G services”, the Centre stated in its counter-affidavit.

The counter-affidavit adds that the Special Committee would carry out the next review after two months, though “other competent authorities would regularly review the situation, and if there is an improvement in the security situation, appropriate action would accordingly be taken”.

The report of the Special Committee, which makes this disclosure, has been placed before the Supreme Court in original, the counter-affidavit says.  “A reading of this report would establish beyond doubt that there is no merit whatsoever in the allegations levelled against the respondents in the contempt petition”, the counter-affidavit avers.  If so, what is the problem in sharing the report with the petitioners, remains unclear.

“Since the report is not annexed with the counter-affidavit, the petitioner has not received a copy of the same and it appears to have been filed in a sealed cover for the judges’ eyes only,” according to the IFF.

In Anuradha Bhasin, the Supreme Court had clearly held that if the state wishes to withhold any material from the petitioner, it must claim a specific ground of privilege on affidavit. Once it does so, the court will then decide if the claim of privilege overrides the petitioner’s rights and even then, a redacted version of the document with sensitive details removed should be shared with the petitioner.

The Centre has also claimed in its counter-affidavit that orders have been issued by the competent authority of the J&K government in terms of the Temporary Suspension of Telecom Services  (Public Emergency or Public Safety) Rules, 2017 to regulate the internet services, including 4G services, in the union territory. These orders were issued, inter alia, on June 17 and July 8 and have not yet been vetted by the Special Committee, as envisaged by the Supreme Court.

“While the validity of these orders cannot be made the subject matter of a contempt petition, …these orders are strictly in compliance with the law laid down by this Hon’ble Court, including in its judgment dated 11.05.2020 passed in the present case,” the Centre has claimed without substantiating it.

The FMP’s grievance, however, is that the J&K administration has not placed these orders in the public domain, to facilitate legal challenge, as directed by the Supreme Court, in compliance with the principle of natural justice. On this, the counter-affidavit keeps a mysterious silence.

“Although the Suspension Rules do not provide for publication or notification of the orders, a settled principle of law, and of natural justice, is that an order, particularly one that affects lives, liberty and property of people, must be made available.  Any law which demands compliance of the people requires to be notified directly and reliably.   This is the case regardless of whether the parent statue or rule prescribes the same or not….In light of the same, it is imperative for the State to make such orders public so as to make the right available under Section 144(5) CrPC a practical reality.”

In its rejoinder, the FMP has challenged the Centre’s refusal to publish any details about the functioning of the Special Committee. Such secrecy is inconsistent with the judgments of the Supreme Court in Anuradha Bhasin v Union of India and Shreya Singhal v Union of India, which require publication of orders that restrict fundamental rights to enable aggrieved persons to challenge such orders before a court of law, FMP has stated.

By holding only two meetings since May 11, the Special Committee has also failed to comply with the Supreme Court’s directions in Anuradha Bhasin which require periodic review of internet restrictions every seven working days, FMP has revealed.

The Supreme Court constituted the Special Committee as an alternative to the Review Committee established under the Telecom Suspension Rules, in view of the special circumstances in Jammu and Kashmir, to provide “adequate procedural and substantive safeguards to ensure that the imposed restrictions are narrowly tailored”, as the FMP’s reply discloses.

The Supreme Court envisaged the Review Committee to look into the question of whether the orders are proportionate, keeping in mind their constitutional consequences. As the restrictions contemplated under the Suspension Rules are temporary in nature, the court had made it clear that the same must not be allowed to extend beyond that time period which is necessary.

In its reply, FMP has deplored the fact that the internet services of the entire union territory continue to be unilaterally restricted to 2G speeds without even a façade of review or oversight provided by the executive branch of the government.

It is possible that the Centre and the J&K administration will again seek to buy more time on August 7 when the matter comes up for hearing before the Supreme Court by citing security reasons, and the Independence Day celebrations on August 15.

FMP’s rejoinder to the Centre’s counter-affidavit may once again elicit a casual response based on more boilerplate assertions without corroboration. The time for adjudicating the issue on the basis of similar legal precedents, therefore, is ripe now than ever before. The government seems to have exhausted all the opportunities that the court has provided to restore 4G internet in the union territory, by conceding it the maximum possible time and the bandwidth  to do so.