Parties Before the Court Are Equal in Theory, But the State Is Now More Than Equal

The freedom to cite ‘national security’, unexamined, and as a reason to withhold information, or have a matter adjourned, or use the ‘sealed envelope’ method, are illustrations. 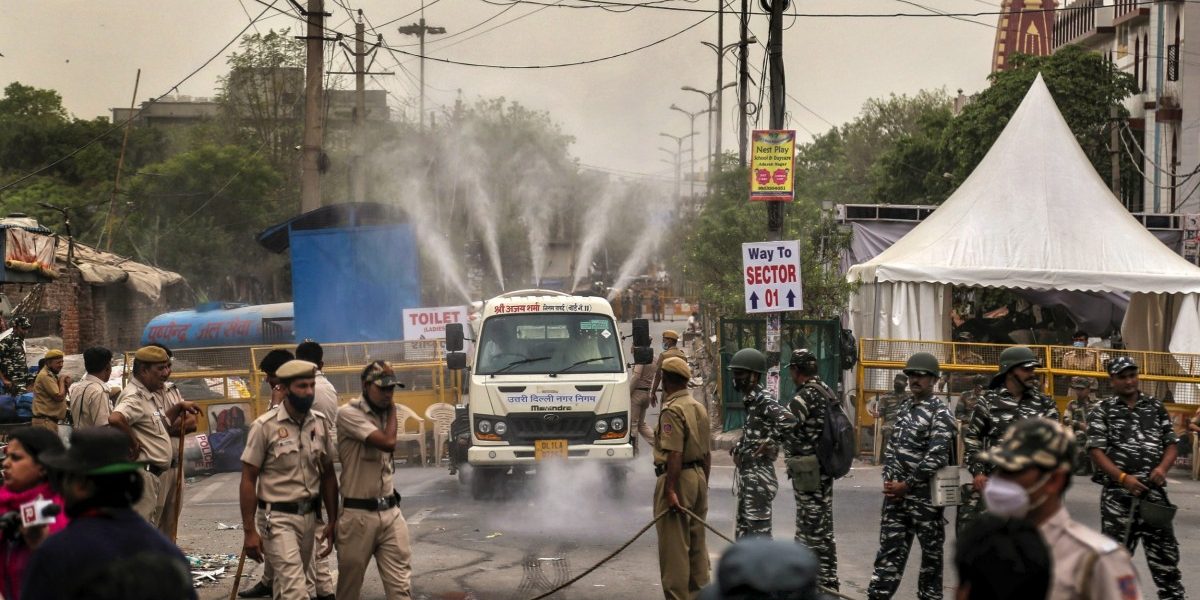 Water being sprayed in a locality a day after an anti-encroachment drive, in the violence-affected Jahangirpuri area, in New Delhi, Thursday, April 21, 2022. Photo: PTI

Sadiqpur is now a nondescript colony in the old city of Patna, but in 1857-1865, it was at the centre of an anti-British, religio-political movement.

Growing up in Patna and being distantly related to the ‘maulvis of Sadiqpur’, I remember my grandmother telling me how the family had organised hundreds of villagers across Bihar and Bengal and dispatched them to fight the British. After the revolt was quelled, Maulvi Ahmedullah and his brothers were sent to ‘kala pani’, the haveli was razed and all the families’ properties forfeited. This was done on the orders of a Court of Sessions, after a formal trial for sedition and for waging war against the Crown. But when my grandmother told me the story, more than 100 years later, there was no question in our minds that the razing of the haveli was an unjust act of retribution by an ascendent colonial state. That is perhaps the benefit of hindsight.

Now, as the postcolonial Indian state starts to adopt similar ideas about power and its exercise on state subjects, as state machismo gains ground, the ground beneath my feet seems to have shifted.

Jahangirpuri in Delhi is one of many Muslim-concentrated colonies across the country, which were marked out for procession routes on Ram Navami/Hanuman Jayanti this year. The processions were provocative and often violent, and there was retaliatory violence from some inhabitants of the colony. Within days, right-wing leaders demanded collective punishment through ‘demolition action’ in the colony where there had been stone-pelting in retaliation. The North Delhi Municipal Corporation seems to have immediately obliged by initiating demolition action, apparently randomly, without having issued show cause notices or heard people.

The broader political narrative is painting the demolition action as retribution against Muslims who had dared to attack a religious procession. The social discourse endorses that position, the more extreme threads linking it to revenge for the exodus of Kashmiri Pandits and the looting of their homes, an account that they seem to have learnt recently from The Kashmir Files.

At the same time, as I try to prepare a legal brief to challenge the demolition action in Jahangirpuri, I am up against all the difficulties of framing a politically oppressive act as a legal issue.

I can also see the courts swaying between recognising it as a purely retributive act by a vengeful state ― that is trying desperately to identify with only one set of people, and against another set ― but also being drawn into the ‘black letter law’ of the Delhi Municipal Corporation Act. Perhaps it is always easier for history to look at broader pictures and make judgements. Courts that function in the moment display significantly less emotional quotients and are forced to restrict themselves to technicalities, ironically also in the service of the rule of law.

So yes, it is too close to the instance of violence and people are still reeling from it, and also from the subsequent arrests and interrogations, but has the impugned demolition notice been issued under the correct provisions of law? Let us see whether under that Act, the corporation has the power to issue such a notice. Is hearing mandated?

Already, we have shifted from recognising retributive state action to parsing the Act and its rules and determining whether this notice was served, and whether that show cause notice was replied to. And what about that list of jhuggi clusters that was marked as irregular and made public? Was Jahangirpuri not already on that list?

This is the nature of law as it operates in the moment. Law is not about comparing similar cases and arbitrariness of response, or taking a bird’s eye view, or recognising the difference in social and political power of parties before it. Law is rather about restricting itself to individual cases, applying precedents but not asking why only some are being prosecuted and others are not. Law is about details and technicalities and nitty-gritties.

The court is not supposed to ask why of the 1,797 unauthorised colonies in Delhi, the corporation chose to target a Muslim-concentrated one (although, admittedly, at least one Hindu shop in the area was also demolished ), while the political leadership is contemporanously drawing mileage from this action, which is presented as showing determination of purpose that puts dissidents and outsiders at the mercy of the state.

The courts determine cases that are brought before them. This is why they continue to try cases against accused, where the main allegation against them is that they were trying to politically mobilise the Muslim community, or create ‘Muslim political consciousness’. At the same time, explicit calls for violent action in the service of a Hindu rashtra are condoned as Hindu political mobilisation. Selective interpretations or applications of criminal law are not the subject of criminal trials. It is limited to the individual case being heard.

Much has been written about the brazen disregard by the demolition squad of the orders of the Supreme Court mandating a stay. The authorities refused to stop until they were presented with written copies of the order.

Similarly, just days ago, the state had chosen to simply not comply with the magistrate’s order allowing Aakar Patel, columnist and much else, to travel at will, and also for the CBI to apologise to him. The CBI did not comply, appealed the order on the next day and said in court, “compliance report nahin file karte hain, nahin karenge”.

Normally, an intention to appeal an order, or even having actually appealed an order, unless there is a specific stay, does not accord to a party the right to ignore the lower court’s orders. But an ascendant state does take many liberties. Many more domestically, in fact, than internationally.

Parties before a court are equal in theory, and yet in any criminal trial, and now in several constitutional ones too, the state is accorded many more courtesies. The freedom to cite ‘national security’, unexamined, and as a reason to withhold information, or have a matter adjourned, or use the ‘sealed envelope’ method, are illustrations. We add to this list everyday tropes like ‘international reputation’, ‘public sentiments’ and ‘public convenience’, where courts have implicitly agreed to treat the state and the subject as having different privileges.