There is no provision in the law that empowers the police to pick up people for merely roaming the streets at night. How is it that such elite IPS cadre members are ignorant of even the basics of the law? 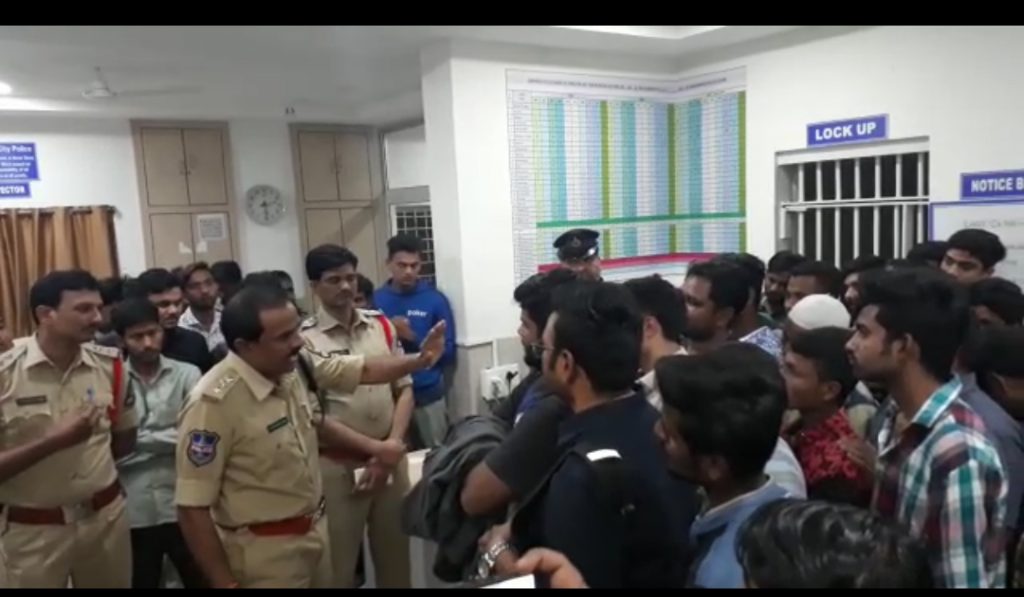 It appears that these raids have the support of elders in the community, who like the police want everybody tucked into bed by midnight. Credit: YouTube

A few weeks ago, in late February, the Hyderabad police carried out yet another ‘chabutra raid’, detaining 295 young men for no particular offence except being present on the streets late at night.

In local parlance, the word ‘chabutra’ refers to a raised stone platform, normally built in front of houses – especially in the Old City and other public corners – and used for sitting and socialising, often late into the night.

The ‘chabutra raids’, which were launched a few years ago by the Hyderabad police in the Old City with the intention of deterring “wandering youth” from roaming the streets at night, have now spread to other parts of the city. After being picked up, these men are usually detained in wedding halls, where their fingerprints are processed through portable fingerprint scanners. The fingerprints are then matched against the Hyderabad police’s records for pending warrants or criminal records.

Even in the absence of any pending warrants or criminal records, the detainees are confined overnight in police custody and are released only after they receive “counselling” and take an “oath”. The violation of such oaths subsequently leads to prosecution under Sections 180 and 181 of the Indian Penal Code (IPC). Since these detainees are released in less than 24 hours, the police are not compelled to produce them before a judicial magistrate.

Video footage of these raids can be viewed here. One video, demonstrating the use of fingerprint technology, is shown below.

In a paternalistic press release published in August 2016, the Hyderabad police had justified these raids:

“South Zone Police have focused on youths/youngsters include minors who are roaming/wandering at after late night on the streets of old city without any purpose/meaning, their future leading in danger and becoming victims of criminals activities. These youngsters are also not showing much interest in studies.”

It appears that these raids have the support of elders in the community, who, like the police, want everybody tucked into bed by midnight. The limited protests against these raids seems to be coming either from young men who are often themselves the victims of these raids or from organisations like the Hyderabad Civil Liberties Monitoring Committee (CLMC), which has publicly questioned the legality of the raids.

The CLMC has a point on the doubtful legality of these raids. There is no provision in the law that empowers the police to pick up people for merely roaming the streets at night. The right to move freely, including the right to roam, is a fundamental right, only subject to reasonable restrictions under the law. Those reasonable restrictions are usually in the form of prohibitory orders under Section 144 of the Code of Criminal Procedure, 1973 or declarations of curfew.

Similarly, the fingerprint processing of all the men detained during these raids is most likely illegal after the Supreme Court’s landmark judgment in the Puttaswamy case, where the court held that all Indians have a fundamental right to privacy.

The search and cordon operations that involve raiding hundreds of houses

These chabutra raids, however, pale in comparison to the ‘search and cordon’ operations being conducted by the Hyderabad police for the last several years, which predominantly target areas populated by migrant population from other states. These search and cordon operations – usually conducted post midnight or in the wee hours of the day – involve contingents of police ranging anywhere between 50-400 personnel, including the top brass, surrounding an area and conducting search operations in houses of the locality.

Citizens are asked to prove their identity and also produce ownership papers for their vehicles, failing which the vehicles are seized. In January 2015, in one such raid, the Hyderabad police claimed to have searched 3,000 houses in a three-hour operation that started after midnight.

As is the case with the chabutra raids, the Hyderabad police carry along mobile fingerprint scanners and scan all the people in the area against its database to identify those with criminal records. Several dozen people are picked up in such raids and detained at police stations in order to verify their antecedents.

A video of the search and cordon operation can be accessed here. Fingerprint profiling can be viewed here.

Historically, search and cordon raids have been used as a military tactic in Kashmir and other areas affected by violent terrorism or extremism. Even in the case of Kashmir, these raids had to be abandoned after 2002 because of the widespread public resentment against such operations.

Though these raids made a comeback last year in Kashmir, they remain a highly contentious issue in the region. These kinds of raids are possible in the Kashmir Valley because the Armed Forces (Jammu & Kashmir) Special Powers Act, 1990 allows the security forces to conduct raids without a search warrant.

However, the police in Hyderabad do not enjoy any special powers and operate under the CrPC, which restricts the manner in which the authorities can search private homes. 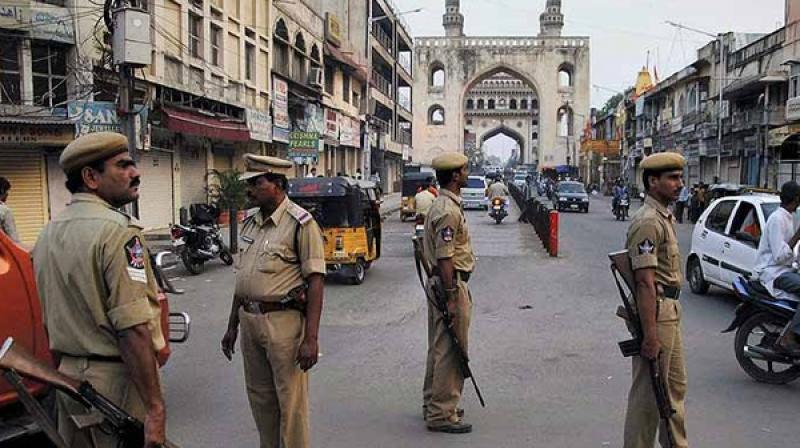 In the ordinary course of events, the police are expected to procure search warrants from a magistrate. As per Section 93 of the CrPC, a court can issue a search warrant only if it is of the opinion that the person in question will not respond to a summons to produce a document required as part of an investigation or refuse to join the investigation.

In extraordinary circumstances, as per Section 165 of the CrPC, the police can search premises without a warrant, subject to certain safeguards such as writing out the cause of the search prior to the raid and submitting the same along with the results of the raid to a judicial magistrate as soon as possible. In either case, the police need to show a reasonable basis for conducting a search.

First, it is highly unlikely that any magistrate will issue sweeping warrants which allow the police to raid an entire locality in the middle of the night, especially in the absence of an ongoing investigation against any specific persons in that area. Second, from statements made to the press by the top brass of the police, it appears that these raids are being carried out on the whims of the police without any specific inputs or intelligence.

For example, in 2013, when these operations first started, a deputy commissioner of police was quoted as saying:

“Though we don’t have specific inputs on stay of terror suspects in these areas but this operation will help in maintaining a close watch on such elements also.”

“We don’t want these areas to be unsafe due to unauthorised persons taking shelter and indulging in offences,” Siva Kumar said, pointing out that they have analysed certain pockets “having vibrations of anti-social activities and identified crime-prone areas”.

In other words, the police are profiling certain areas based on the kind of people residing in those areas.

Going by news reports, it does not seem that these raids actually discover any criminal activity.

There have been a few instances where fingerprint profiling has led to the arrest of some people with outstanding warrants, but mostly, the police appear to be seizing vehicles, gas cutters, gas cylinders, liquor and, in one case, six horses. It is not clear if the police have a legal basis for conducting these seizures. Yet, in 2016 alone, the Hyderabad police reportedly carried out over 90 search and cordon operations resulting in the arrest of 116 persons and 61 cases being registered.

Unlike the chabutra raids, these search and cordon raids appear to be fairly unpopular, because no one likes to have their house raided in the middle of the night. As reported by Deccan Chronicle, one such raid last month irked residents, with one of them being quoted as saying, “They come in with full force, asking for our ID proofs during late night which disturbed our sleep. I wonder if this is legal and not”.

It is difficult to see how any court will uphold the legality of these raids, given the judgments of the Supreme Court in landmark cases like Kharak Singh vs State of UP (1962) and Puttaswamy vs Union of India (2017).

In the Kharak Singh case, despite the Supreme Court declining to recognise a fundamental right to privacy, the court still struck down a regulation that allowed domiciliary visits by the police to the houses of persons with criminal records in the middle of the night. The court had concluded that “an unauthorised intrusion into a person’s home and the disturbance caused to him thereby, is as it were the violation of a common law right of a man – an ultimate essential of ordered liberty, if not of the very concept of civilization”.

With the Supreme Court declaring privacy as a fundamental right in the Puttaswamy case, it should have theoretically become much tougher for the state to violate the privacy of a person’s home. Yet it appears that the lofty pronouncements of the Supreme Court have had no effect on the Hyderabad police. As things stand, there is little doubt that at the very least the Hyderabad police needs to convince the legislature of the need to enact a legislation that allows such raids. Even presuming that the legislature moves to enact such legislation, it is doubtful whether it will stand the test of reasonableness and proportionality.

The tactics adopted by the Hyderabad police are very worrisome. These raids aren’t the doing of low-level police officers, but sanctioned by the highest ranks of the Hyderabad police. How is it that such elite IPS cadre members are ignorant of even the basics of the law?

In any event, these tactics need to be kept in check before other police forces decide to adopt similar tactics. Meanwhile, the Hyderabad police has already boasted to the press that chabutra raids are being studied for replication by their Delhi counterparts.