Muslim Women Challenged Those Denying Them Education, But Court Made the Conversation About Hijab

The court should instead ask if the state has the right to bar women from accessing education if they choose to cover their heads, or their faces. Students of Jadavpur University hold placards while raising slogans during a protest in support of the right to wear a 'hijab', in Kolkata, February 11, 2022. Photo: PTI

“[…] Consequently, the government has clamped prohibitory orders within the radius of 200 metres of educational institutions.”

– The Karnataka high court recording the state’s submissions in its interim order dated February 10, 2022 in the matter of barring of access to education when dressed in particular ways.

The constitutional court’s interim order displays primarily an anxiety at the unfolding ‘law and order situation’.

“The learned advocate general also brought to the notice of the court that there are several counter agitations involving students who want to gain entry to the institutions with saffron and blue shawls and other such symbolic clothes and religious flags,” the court records.

In the event, its chief concern, at least in the interim, seems to be to manage public peace rather than to engage with the constitutional question before it: does the state have the right to bar women from accessing education if they choose to cover their heads, or their faces?

The state on the other hand, the natural custodian of ‘law and order’ and ‘internal security’, having first promulgated a government order encouraging regulation of access to college education by prescribing uniforms, and then ‘clamping prohibitory orders around schools,’ exhibited no such pain or anxieties.

Thus, as often happens in situations where the immediate objective is to force a settlement between unequal aggressors, the interim order treats all parties as equal offenders and insists on equal restraint. The particular roles of the parties involved, and of the state, remain unexamined.

As a matter of fact, the constitutional court has framed the question in the inverse. To be clear, it is the women who are before the court to challenge the actions of the educational institutions, and the state government, that affect their access to education. The state has not come before the constitutional court in a challenge to the hijab. Thus the focus of scrutiny should be the state action, on its own merits, which is the subject of the writ petitions. Rather than examining the state’s action where it seeks to regulate access to education, and the set of circumstances, when it might be considered reasonable to do so, the court and public discourse has made women’s choice the subject of enquiry. 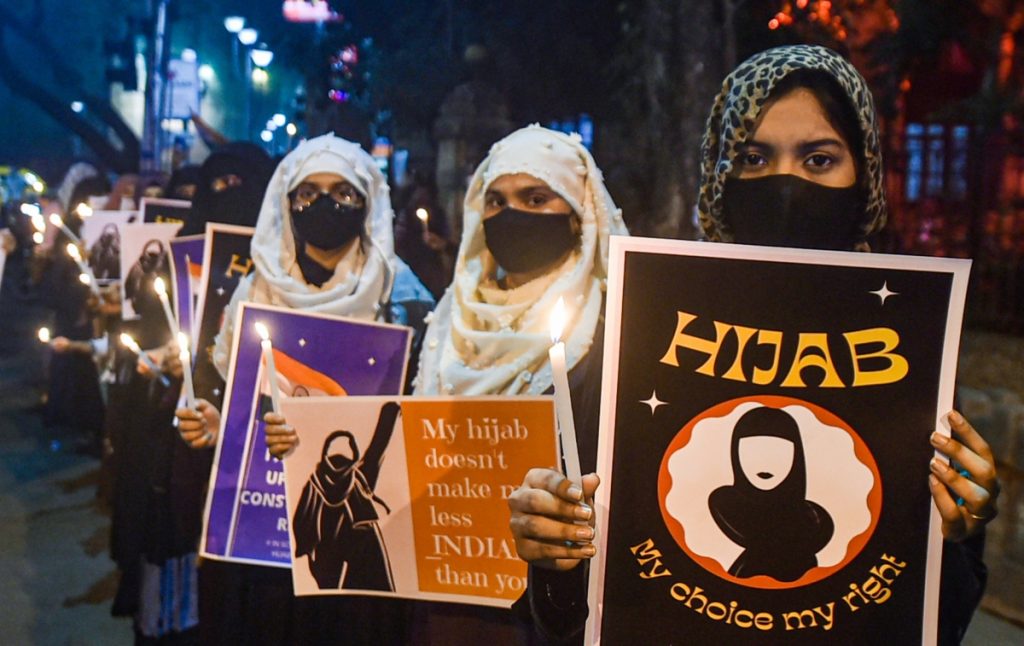 Muslim women in hijab participate in a candle light march during a protest rally over the ‘hijab’ ban in Karnataka, in Kolkata, February 11, 2022. Photo: PTI Photo/Swapan Mahapatra

The issue of regulating access to education should be considered in the context of broader questions around education being a public good. How much state control is reasonable in constituting public education culture? Should the state intervene to balance majoritarian tendencies? Should mid-day meals at schools tend towards vegetarianism? Should schools not employ Dalit cooks alone as public policy and insist on fraternal dining? Should there be a greater involvement of stakeholders in fostering a democratic public education culture even on issues such as how soon to resume school after the long COVID-19 period?

However, these aren’t the set of questions that the present issue is clubbed with. The focus is oddly on the hijab, and the interim order frames the problem in terms of a sole constitutional question: whether it is an “essential religious practice” or not?

This rather unimaginative framing, reminds me of Saba Mahmood’s fascinating book The Politics of Piety, an ethnographic account of an Islamist women’s ‘piety movement’ in the mosques of Cairo, Egypt. Mahmood writes about the belief amongst some of the women that in order to become good Muslims (to actually be able to follow ‘essential religious practices’ in any real sense) one had to first ‘discipline oneself’ and become more mindful, which they did by adopting pious practices. Mahmood describes how practices like veiling, ‘external actions on the body’, are meant to cultivate the internal self such that it tends naturally towards God. She uses the example of a runner preparing for a marathon, who finds ways to discipline the body. Thus, the veil according to some of Mahmood’s subjects was essential practise towards essential practice.

Pertinently, Mahmood also examines agency in such performance of piety. It is a very deliberate act of disciplining of the external self, albeit in the service of religion.

Liberal feminism typically locates agency and choice in actions that resist conservative structures and discourses. On the other hand, analyses of Islamic movements sometimes argue that the resurgence of Islamic forms is an act of agency and is reflective of social protest against the failed modernising projects of post-colonial Muslim regimes. Mahmood’s work tries to step outside of this duality and examine women’s agency in the performance of everyday acts of clothing and such.

She also says that norms are not always ‘consolidated or subverted, but also performed, inhabited and experienced in a variety of ways’.

While on the one hand, ethnographic accounts of Muslim societies recount the same diversity in experiencing faith as with other eclectic religions, and also the constant individual negotiations with dictats of religion (would Allah really mind if I do this?), there is an overarching view of it as being bound to scriptures and therefore less democratic and flexible. An idea that Islam is perhaps more ‘Semitic’ and less ‘Indian’.

In any case, while the interim order consigns to a later date, and a deeper examination the question whether wearing hijab in the classroom is an essential religious practice in Islam (in my experience, even Semitic religions are not as specific as that), it also restrains apparently equalised offenders from “wearing saffron shawls, scarves, hijab, religious flags or the like within the classroom, until further orders”.

The parallel of French secularism

It is often said of French secularism that in constituting ‘secular public spaces’ it seeks to exclude only that which is ‘foreign’, or extreme, while accommodating all the everyday cultural symbols of French Catholicism.

Talal Asad in his work on French secular culture usefully points out:

“secularism has many origins, and I find it useful to begin the story in early modern times. At the end of the sixteenth-century wars of religion, the states of Western Christendom adopted the cuius regio eius religio principle (the religion of the ruler is the religion of his subjects).[…] I want to suggest that the French secular state today abides in a sense by the cuius regio eius religio principle, even though it disclaims any religious allegiance and governs a largely irreligious society.”

Thus, the hijab worn by immigrant Muslim women is believed to be a religious sign conflicting with the secular character of the French Republic, while “the subsidized religious schools throughout the country, the diocesan associations, the special arrangements in Alsace-Moselle, the religious associations that lawfully receive donations and hold property, as well as the religious gatherings that have the right to perform burial rituals in public spaces or march in funeral processions through public thoroughfares, all have a politico-legal presence in the secular structure of the French Republic.” 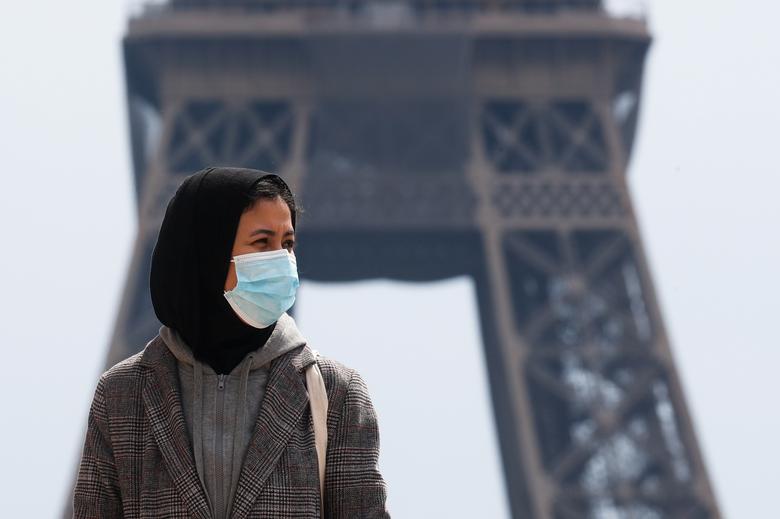 Representative image of a Muslim woman wearing a hijab near the Eiffel Tower in Paris, France. Photo: Reuters

Indian secular culture too accommodates everyday markers of religion and caste almost as a default position. Although, it is beginning to now disapprove of select markers that it increasingly perceives as being ‘foreign’, or ‘extreme’, and often both, and in conflict with national values.

Illustratively, while defending the right to wear the headscarf to school in the present writ petition, counsel gave the example of his own son, who apparently wears a namam to school by virtue of being a Brahmin. He had thus drawn an explicit equivalence in terms of essential religious practices, inviting the court to examine (or restrict) all markers in the interim. The court in its wisdom chose to restrict only those markers that do not occupy public cultural spaces by default from being in dominant cultural positions.