Once again, Hadiya has been infantilised, this time by a benevolent patriarch – the apex court of India. 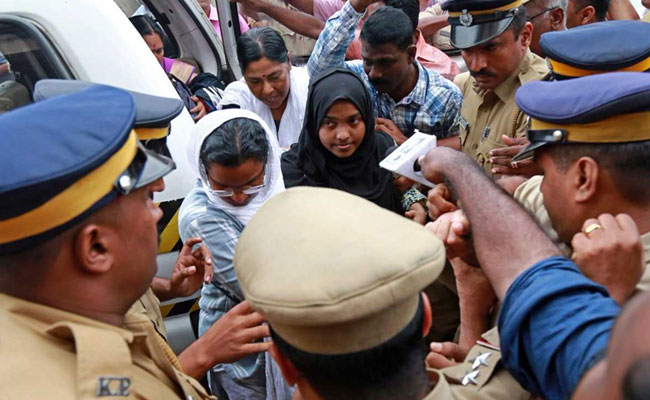 On November 27, we witnessed an extraordinary encounter in the Supreme Court: a face-to-face meeting between an adult, non-urban, non-elite woman, primarily a regional-language speaker, and three of India’s most powerful legal authorities – all senior, elite, English-speaking, urban men. So unique was this experience to the latter that one of them candidly admitted that he had never had such an encounter in his whole career. The young woman was being questioned, but she was no criminal. On the contrary, she was a victim.

The young woman is Hadiya, from Vaikom, Kerala, whose ordeal is well known by now. Kept in illegal custody in her father’s home sanctioned by the Kerala high court’s twisted Brahmanical logic, she was finally being heard by the Supreme Court on November 27. The moment she stepped out of that veritable prison, she burst out, shouting to the world her choices. In court, she exuded calm courage and grace while answering the learned judges’ queries.

I genuinely wanted to reflect on this encounter in the language of modern democratic politics and the Indian constitution. Many have already spoken and written in that fashion by now. But the very staging of power in the courtroom was such that I can no longer see how that fits. Rather, I am able to conceive of the unfolding of the event only in terms of the virulent Brahmanical order that is increasingly the naked banal reality in India – and undeniably, in Kerala as well.

As I followed the updates from court, I thought: this is how it is going to be when we reach the gates of Vaikuntha. At the gates of Vishnu’s abode, divine beings will weigh our merits and our failings, assess our worthiness, hand over our penances and briskly shoo us towards their performance. And so Hadiya was heard, assessed and her means of atonement speedily decided. There was no guarantee that she would be heard, though she was summoned for that purpose. The reports of the guards of hell, to which she was subjected, seemed equally important to the celestial beings – the ‘findings’ of the National Investigative Agency (NIA).

The staging of power in the courtroom affirmed that the gates of Vaikuntha are indeed far more exalted and rarefied than the miserable world of caste and gender inequality that poor humans have to endure. And so when senior counsel Indira Jaisingh made a reference to the reality of that world and its presence in the courtroom by asking whether Hadiya would have been treated thus had she been a man, the question seems to have evoked disgust from the bench. The very prospect that the gates of Vaikuntha may be tainted by human ills sounded abhorrent to them. Where did gender discrimination enter from, they asked. Swiftly asserting their infallibility of course entails silencing the other, and the exalted beings did not tarry.

The drama of power also revealed that the gates of Vaikuntha are indeed different from, yet not unconnected with, the hellish netherworlds fostered by the gods. As Hadiya stood waiting to speak, both the hierarchical distance and connection-in-distance between the sanitised world of the Supreme Court and the boorish unintelligent nether world of the NIA came superbly into view. Of course the spaces of divine beings will have none of the latter’s common crudity, but the latter is indeed unavoidable for security purposes. Hence the latter’s presence and growls are taken seriously. For  11 whole months, Hadiya had suffered the torments of a part of this nether hell watched over by her father. Having suffered and survived hell and now facing the judgement of the heavens, she determinedly dug her heels into the precarious, slippery, unstable space dividing the two. The denizens of the nether world – the NIA, the Sangh supporters, many CPI(M) intellectuals – thirsted to see her collapse back into hell. They had come prepared with arguments about her mental instability, her lack of agency.

How disappointed they were that the heavens offered her penance instead of eternal damnation. The court directed her to complete her studies, restored some basic freedoms, freed her from the hellfire tended by her father, Asokan and reinstalled her in a women’s hostel. Naturally, Hadiya and her husband Shafin rejoiced at the respite, felt that they could breathe now, and we rejoiced with them.

But as I write, the indignant roar sweeping over the media and social media hits my ears. Both the Sangh parivar supporters and some CPI(M) followers are angry: how could the divine beings spare this traitorous female, they snarl. Even respectable media are working overtime to misreport the SC order and jumble up the sequence of events in this case so that it fits into the love jihad narrative. Hadiya’s clear-sighted courage and her spirited attempt to shout to the world her choices seems to have left all kinds of Islamophobes puzzled and furious. They take refuge in either outright disbelief that a woman who chose Islam could be really so spunky, or resort to callous dismissal, using the old canard that religious Muslim women are voiceless slaves.

But the divine beings calculate more shrewdly than their minions who run the hellfire. They know that sometimes modernist permissiveness serves surveillance better than crude medieval restrictions. They certainly have not stooped to heed Hadiya’s choices. Instead, they have deftly reduced her demand for freedom to their terms, smoothly dismissing her other demands which appear to clash with these, or setting them aside. As for her husband and marriage, it seems clear that they await further deliberations on the report of the NIA.

At the end of it all, I feel drained, exhausted, trapped by conflicting visions of joy and foreboding. In one eye, I see the relieved happy couple, Hadiya and Shafin, rekindle their hopes for the future. In the other, however, I see the demise of democracy that would have conceded her full citizenship. I see that she is still infantilised, this time by a benevolent patriarch. I rejoice at the sight of the two young people’s hopes, but I gasp at the vision of Hindu heaven and hell incarnate in this society reducing us to mortals who must suffer our karma, be tortured by the keepers of hell and be judged by the high heavens. November 27, 2017, for this reason, has left me squinting, struggling not to be blinded by this insight.

J. Devika is a teacher and researcher at the Centre for Development Studies, Thiruvananthapuram, Kerala.