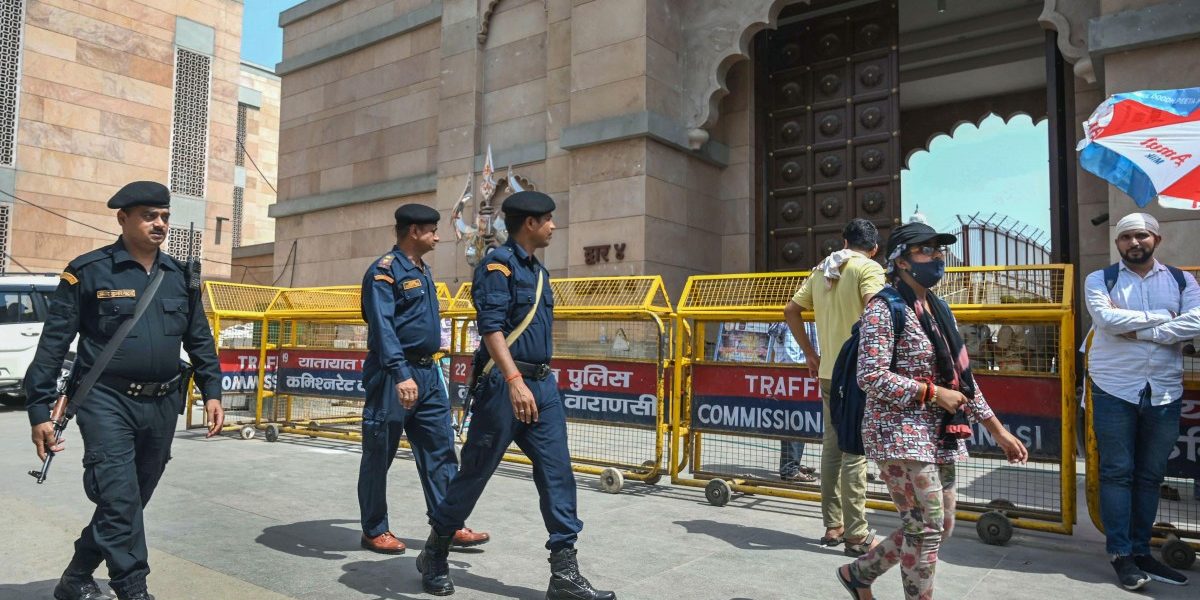 File image: Security forces outside the Gyanvapi mosque complex on May 17. Photo: PTI

New Delhi: A Varanasi district court on Monday, September 12, dismissed the Anjuman Intezamia Masjid Committee’s plea – citing the Places of Worship Act – and held that the petition filed by five Hindu women seeking year-round access to what they claimed was the ‘Maa Shringar Gauri shrine’ located behind the western wall of the Gyanvapi mosque complex was ‘maintainable’.

In effect, this means their suit will proceed and be adjudicated on merits.

District Judge A.K. Vishvesha said that the 1991 Places of Worship Act – which prohibits altering the status of a place of worship as it existed on August 15, 1947 – did not apply since the petitioners were claiming they offered daily worship at the spot till 1993 and thereafter once a year, after the UP government restricted access.

This claim, which the judge said needed to be tested in a civil court, meant the bar envisaged by the 1991 Act was not relevant.

Seeta Sahu, one of the five Hindu petitioners, told The Wire, “We are absolutely thrilled and delighted. In fact we want to put in another petition to clear out the area where our Mahadev has been found. We want to worship our deity.”

Sahu’s comment is at odds with one of the grounds the judge cited in favour of her group – that they were not challenging the status of the mosque:

“The main argument of the learned counsel for the plaintiffs is that the plaintiffs have not sought declaration or injunction over the property/land plot no.9130. They have not sought the relief for converting the place of worship from a Mosque to Temple. The plaintiffs are only demanding right to worship Maa Sringar Gauri and other visible and invisible deities which were being worshipped incessantly till 1993 and after 1993 till now once in a year under the regulatory of State of Uttar Pradesh. Therefore, the Places of Worship (Special Provisions) Act, 1991 does not operate as the bar on the suit of plaintiffs. The suit of the plaintiffs is limited and confined to the right of worship as a civil right and fundamental right as well as customary and religious right. I agree with the learned counsel for the plaintiffs.”
The judge had last month reserved the order till September 12 in the matter that has seen communal debates.

He has now rejected the Committee’s Order 7 Rule 11 CPC application challenging the maintainability of the women’s contention to be allowed to worship there.

The committee had cited the Places of Worship (Special Provisions) Act, 1991, which says that the religious character of place of worship will continue as it existed on on August 15, 1947.

The suit filed by the Hindu worshippers is not barred by The Places of Worship Act or the Waqf Act, he said in court today.

Speaking to The Wire, S.M. Yasin representing the Anjuman Intezamia Masjid Committee said, “We are waiting for the final order, our next logical step will then be to approach the high court.”

Judge Vishvesha also said an Allahabad high court order from 1942 which affirmed Hanafi Sunni ownership over the Gyanvapi mosque and adjacent area — the subject of the current suit — was not relevant as Hindu plaintiffs were not a party to that matter.

Also read: A Mosque Can’t Be Turned into a Hindu Temple. Period. The Law Says So.

The case was heard by the district court following an order by the Supreme Court.

On April 8 this year, a lower court hearing the five women’s plea had ordered a video inspection of the mosque premises by a team headed by advocate commissioner Ajay Kumar Mishra.

On May 16, the Hindu women’s lawyer told the Varanasi court that a ‘shivling’ had been found within the mosque premises, following which the court ordered that the area where it was found be sealed.

“This is highly improper as the Commissioner report is supposed to be confidential until it is filed…Unfortunately the trial court entertains the application and marks an area which is to be sealed,” senior advocate Huzefa Ahmadi, appearing for the Anjuman Intezamia Masjid committee, had said.

On May 17, the Supreme Court lifted the restrictions but asked the ‘shivling‘ to be “protected.”

Three days later, the Supreme Court transferred the case to a district judge, observing that due to the complexities and sensitivity of the civil suit, it had better be tried before a “senior and experienced judicial officer.”

Police Commissioner A. Satish Ganesh had told news agency PTI on Sunday that prohibitory orders had been issued in the Varanasi commissionerate and officers had been asked to interact with religious leaders in their respective areas to ensure that peace is maintained.