The high court has issued a slew of interim directions to the authorities to prevent further harm to the river. 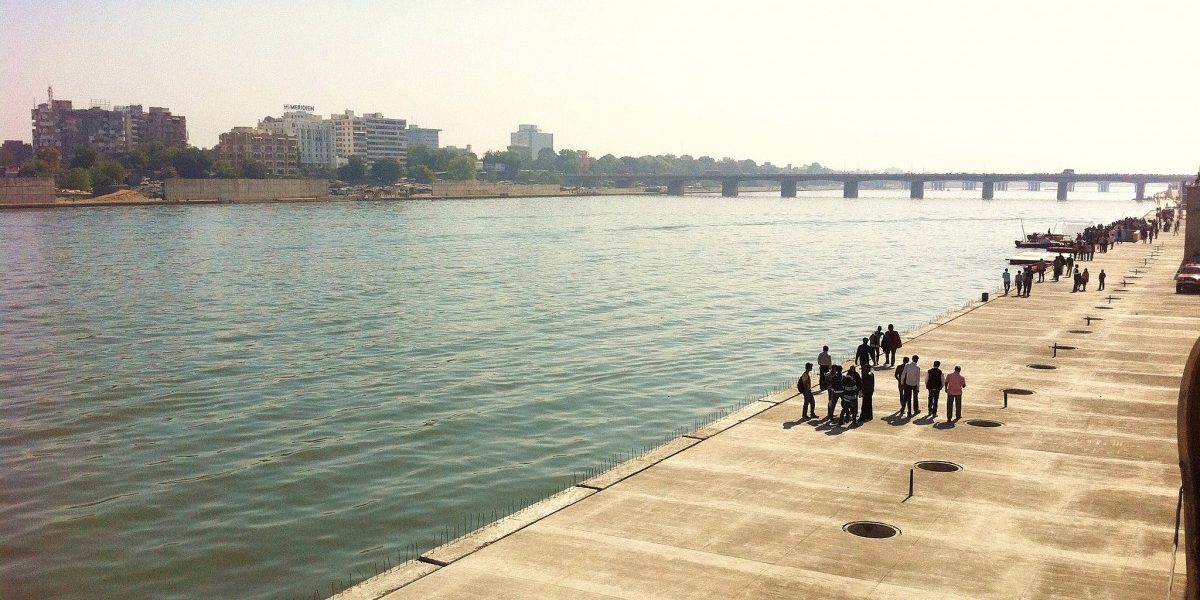 The Sabarmati riverfront in Ahmedabad. Photo: Hardik Jadeja/CC BY 3.0

New Delhi: The Gujarat high court bench of Justices J.B. Pardiwala and Vaibhavi D. Nanavati, on September 23, used the ‘public trust’ doctrine to hold the state government responsible for stopping municipal councils and industries from soiling the water bodies in the Sabarmati river.

“In our Constitution, water resources are held in public trust. We have to use the “Public Trust Doctrine’ to apply stringent provisions against permitting municipal bodies or industries from polluting rivers,” the bench observed in its interim order.

The bench had in August taken suo motu cognisance based on media reports that sewage water was not being treated in accordance with the set norms at the sewage treatment plant (STP) at Pirana in Ahmedabad and that polluted water was being released into the Sabarmati river. The bench had then ordered the Gujarat Pollution Control Board (GPCB) to carry out a thorough inspection to detect effluent pipelines through which industrial waste is discharged into sewage lines. The bench sought necessary action against all the errant industrial units.

Expressing dissatisfaction with the GPCB’s record, the bench had observed that those in power were protecting the polluters.

On September 23, the bench, after hearing the counsel and having gone through the materials on record, expressed its view that very urgent steps are required to be taken to save the river before it is too late. “A stretch of almost 120 km of the river is dead including the portion of the Sabarmati Riverfront,” the bench observed.

The high court has earlier constituted a Joint Task Force (JTF) comprising officials from different agencies to deal with the situation. The JTF members agreed that the Ahmedabad Municipal Corporation (AMC) should initiate extensive drive to identify the industries discharging the effluent into the sewerage network without permission and also to initiate appropriate action. The GPCB and the police department were asked to work in coordination to keep in check any unauthorised disposal through tankers or tractors in the area.

In a significant direction, the bench held that the principle of collective responsibility shall be imposed on the industrial estates and/or industries located within the vicinity of each other. The industrial associations shall take the responsibility for the misdeeds of its members, the bench has held. “The illegality committed by one industry shall result into collective penalties such as payments against pollution, i.e. on the principle of ‘polluter pays’, disconnection of the electricity supply in clusters from where the pollution originates, etc.,” the bench held.

The bench directed that the discharge points, i.e. the place where the industrial effluents arrive at the treatment  centres and are thereafter discharged into the sewerage network or river outlet post treatment, shall be monitored in real time by the CCTV cameras and Supervisory Control and Date Acquisition (SCADA) apparatus/system at the specific points so as to localise and identify the source of discharge of the untreated industrial waste/effluents and inform the concerned authorities at the earliest.

The bench, in an effort to name and shame the polluter, also empowered the JTF members to publish in the newspapers the details of the set-up/industry along with the name of the owner running such set-up guilty of releasing untreated effluent wastewater into the sewer line maintained by the AMC. “The cost incurred for the publication of the name of such defaulter shall be borne by the AMC and the same shall be recovered from the erring defaulter by way of arrears under the land revenue at the earliest,” the bench held.

If any particular industry is caught flouting the norms or is found indulging in dubious practice or methods of discharging their trade effluents, such industry shall not be permitted to participate in any industrial fair, public private partnership events, etc., the bench held.

The bench directed the AMC to disconnect the water and the drainage connections of such erring set-up/industrial units which release partially treated/untreated wastewater. No reconnection shall be granted by the AMC without the prior approval of the GPCB, the bench categorically held. 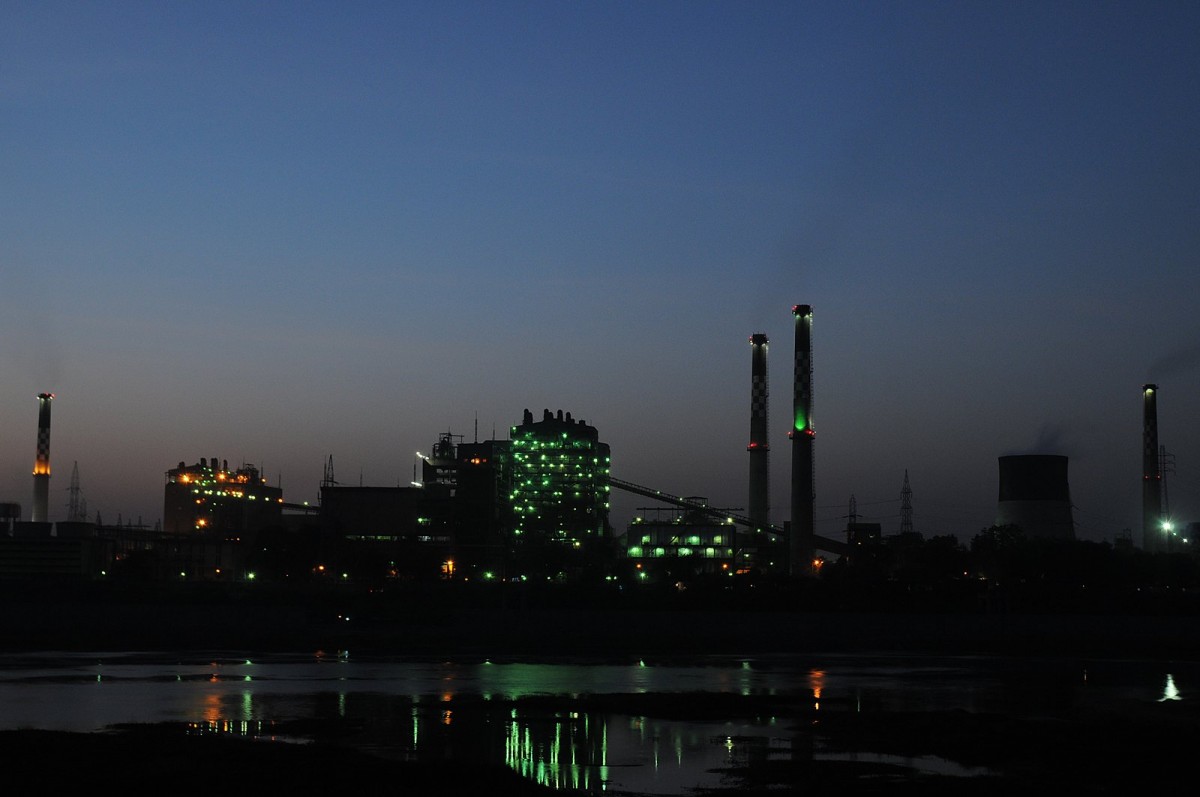 The Sabarmati thermal power station, on the banks of the river. Photo: Koshy Koshy/Flickr CC BY 2.0

The bench also directed the JTF to actively involve the law enforcement agencies to stop the movement of industrial effluents in tankers at odd hours. The bench directed the Gujarat Industrial Development Corporation (GIDC) to take steps to provide drainage connections to the industries so that the sewage water can be used in the various Common Effluent Treatment Plants (CETPs) for dilution of the industrial effluents at the outset, in order to reduce the problem of industrial contamination.

The bench directed the GPCB to monitor the waste water generation of industries in accordance with the production capacity of each industry so as to assess if the industrial effluents are being illegally discharged in the sewage network or not.

The next hearing of the case is to be listed before the same bench on October 21.

The interim order of the high court on September 23 brings focus on the ‘public trust doctrine’, which the Indian Supreme Court borrowed from American case law in the Span Motels case. In 1995, Span Motels built a resort on the bank of the Beas river between Kullu and Manali in Himachal Pradesh. The former Union minister and Congress leader, Kamal Nath, had links to the hotelier, who had encroached a swathe of forest land. The encroachment was ‘validated’ in 1993-94, during Kamal Nath’s tenure as minister. During the 1995 monsoon, the river engulfed part of the land and threatened the resort. In an effort to protect its property, both before and after the 1995 floods, Span Motels carried out substantial work (dredging, construction of concrete barriers, wire crates, etc.) to deflect the flow of the river. Justice Kuldip Singh of the Supreme Court was only a couple of weeks from retirement when he delivered the judgment in the case on December 13, 1996.

As Justice Kuldip Singh held, the public trust doctrine primarily rests on the principle that certain resources like air, sea, waters and the forests have such a great importance to the people as a whole that it would be wholly unjustified to make them a subject of private ownership. The said resources, being a gift of nature, should be made freely available to everyone irrespective of their status in life. The doctrine enjoins upon the government to protect resources for the enjoyment of the general public rather than to permit their use for private ownership or commercial purposes.

Also read: The Police Did Not Bungle in Assam, They Committed a Horrific Crime

In this case, the Supreme Court quashed the prior approval granted by the Union Ministry of Environment and Forests in 1993 and the lease deed in favour of the motel. The court directed the Himachal Pradesh government to take over the area and restore it to its original-natural conditions. The court directed the motel to pay compensation by way of cost for the restitution of the environment and ecology of the area. The court held that the pollution caused by various constructions made by the motel in the riverbed and the banks of River Beas had to be removed and reversed. The motel was asked to show cause why a pollution fine, in addition, not be imposed on it.

The Supreme Court has applied the public trust doctrine in several cases since then. In the latest case, which challenged the construction of the Central Vista Project, the petitioners contended that a transient government holds the resources in trust for the public and they can only be utilised for the benefit of the public. Relying on American case law, the petitioners further argued that the doctrine extends to properties which are of “special consequence” and extending the same logic, they urged that Central Vista is of special consequence for the nation, thereby calling for a high threshold of due process. To further their argument of suppression of public trust, the petitioners urged that the bid document reveals that the decision of constructing a new Parliament building or to renovate the existing building was left to be decided by the private consultant, and entrusting a private consultant with a fundamental decision of this nature does not fall in sync with the principles of public trust.

While deciding this case, however, the Supreme Court emphasised that the practical understanding of this doctrine entails a balance between protection and maximum beneficial use of resources. Relying on the recent American literature on the doctrine, the Supreme Court reasoned that the case law demonstrates that this approach has left space for commercial uses of public resources.

The public trust doctrine, the court interpreted in this case, does not prohibit beneficial use of public resources. “The scale would not tilt towards status quo and retention of the existing condition of public property when the proposed use is for legitimate development and creation of assets and in public interest…,” the Supreme Court held in this case.

In any case, the latest interpretation of the doctrine by the Supreme Court in the Central Vista project case has no relevance to the Sabarmati river pollution case before the Gujarat high court. The high court, having rightly invoked the doctrine in its interim order, will hopefully take it to its logical culmination to ensure that its directions to keep the Sabarmati free from pollution are complied with by the authorities.