Rather than being on a collision course with the Centre to oppose recent agriculture laws, constitutionally, state governments have better options at their command to help farmers. 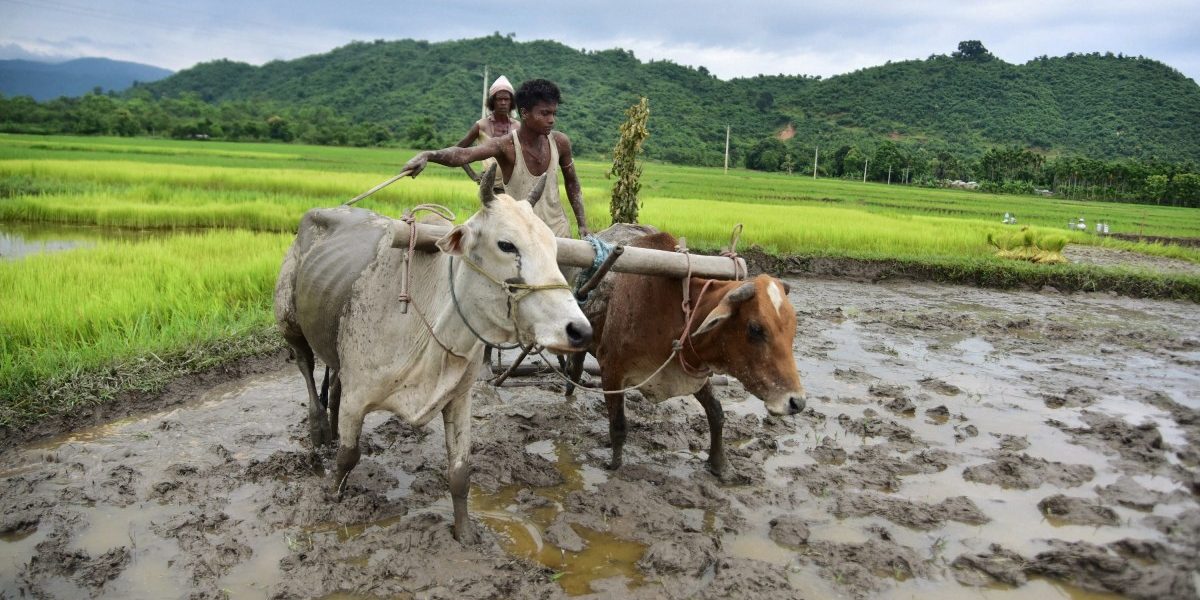 The three agriculture laws passed recently by the parliament give rise to several serious issues, that range from matters related to food security to the lives of Indian farmers. One of the major issues among them is related to the constitutionality of these laws, which demand a thorough analysis as it holds the key to resolve the crisis they generate.

The three agriculture laws are a clear infringement on the states’ right to legislate. The main subjects of the three acts are agriculture and market that are essentially state subjects as per the Seventh Schedule of the Constitution. However, the Central government finagled its way into the legislation by misconstruing its authority on food items, a subject in the Concurrent List, as authority over the subject agriculture. However, food items and agricultural products are distinct categories as many agricultural products in their raw forms are not food items and vice versa.

The Central government’s abuse of power raises an important question. What ought to be the response of other constitutional institutions like the state governments when their constitutional rights are undermined in a blatant fashion? In the past, we had witnessed various kinds of responses; partaking in the protest demonstrations, passing of resolutions, moving to the Supreme Court, etc. However, none of these responses mark states governments’ constitutional authority. It is in this background that the Congress party’s advice to its state governments to pass state legislations to annul the agriculture acts passed by the Centre is significant.

But at the same time, it is also important that states’ constitutional rebellion is not limited to a symbolic gesture. As per the information that is coming out, Congress-led state governments are planning to take recourse to Article 254 (2) of the Constitution to negate the anti-agriculture Central laws. This article empowers state governments to pass legislations which negate the Central acts in the matters enumerated under the Concurrent List.

A state legislation passed under Article 254 (2) requires the assent of the President of India. The unconstitutional way of passing the bills in Rajya Sabha vividly shows that the Central government will go to any extent to ensure that agriculture laws, which virtually leave the farmers at the mercy of crony cooperates, will prevail. It is highly unlikely that the President will give assent to the agriculture bills that are passed in the state assemblies.

However, states do not have to take the route of legislating on a subject from the Concurrent List as agriculture market is a subject in the State List. By doing so, a state would be concurring with the Centre’s misconstrual of agricultural products as food items. What is more viable and needed is state legislation on the subjects enumerated under State List. The Congress-led state governments chose to stay away from this obvious option because conventional wisdom says that constitutionally, state governments cannot pass legislation that contradicts a Central law unless they take recourse to Article 254(2). 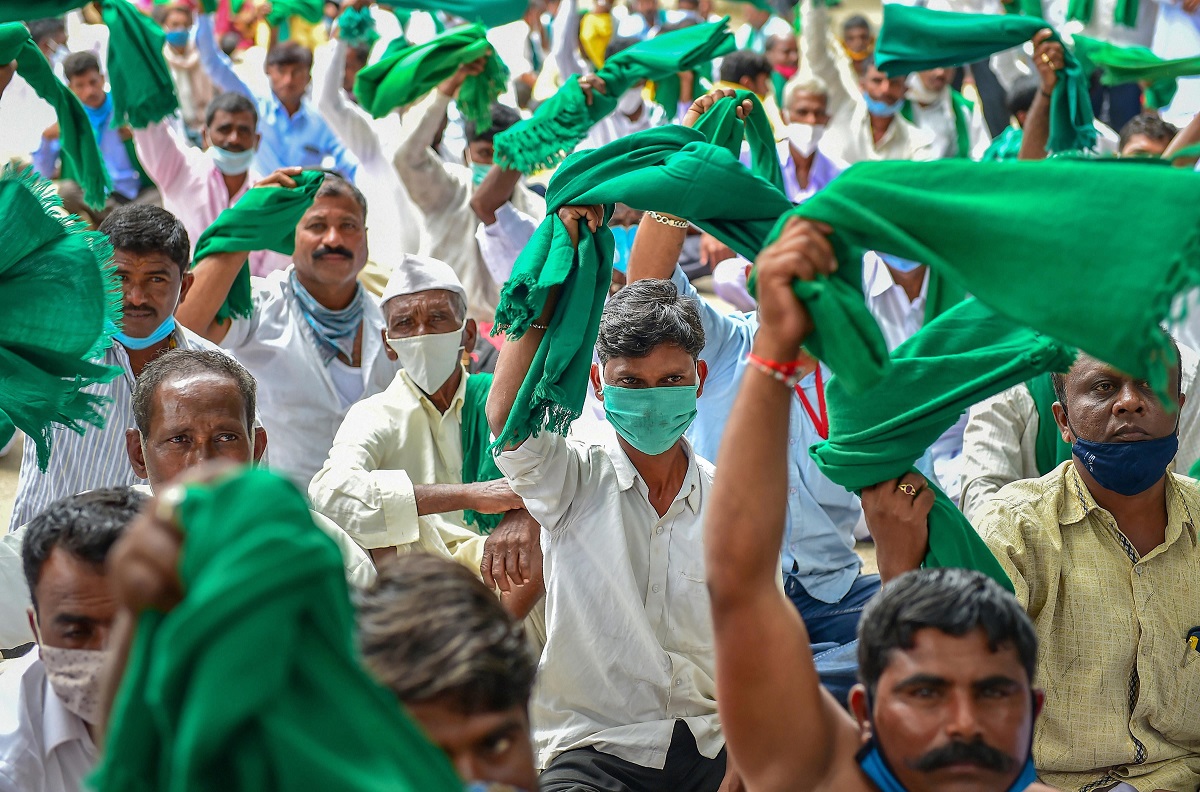 Farmers protest against the passage of new farm Bills in the parliament and land legislations proposed by the Karnataka government in Bengaluru, September 22, 2020. Photo: PTI/Shailendra Bhojak

However, states do not have to contradict the Central agricultural laws in order to weaken it or overcome its ill effects. The Central agriculture laws favour the corporate cronies not mainly by the act of commission, but by the act of omission. The laws favour the corporates by leaving many things unsaid or undefined. To tilt the agricultural laws to favour the farmers, all that the states need to do is to introduce certain additional guidelines and specify the safeguards.

Specifying what is deliberately omitted in the Bills may contradict the intention of the Central government, but it will not contradict the content of the Bill, and thus, the constitutional issue of a state law being inconsistent with a Central law does not even arise. Two propositions are considered inconsistent if they cannot be true together, and therefore, cannot be implemented together. Bringing additional conditions and specifications does not make a state law inconsistent with the central law.

A state law can include a provision that says that MSP will be applicable to all state agriculture markets. Since state markets are equivalent to the Centre’s notion of the trade area, a state clause will be automatically applicable to the trade area that is mentioned in the Centre’s Bill too. Since there is no reference in the Central Bills about MSP, the question of inconsistency does not arise at all.

Not only is the MSP omitted in the Central Acts, but a system that oversees such government regulations is also missing. As Central laws do not forbid it, the state laws can constitute a system or a task force that oversees those government regulations like MSP are implemented in the state markets, and consequently, in trade areas too. However, the Central laws do forbid the states from levying market fee or cess, but the notion of penalty is different from the notion of fees or cess. Penalty is not merely another name, but a different concept. So, a state government can impose penalties on corporates who refuse to oblige to its added guidelines and regulations.

Chapter 5 titled as “Miscellaneous” in the Farmers’ Produce Trade and Commerce Act, 2020 is a clear statement about the goal that the Central government aims to achieve through the recent agriculture Acts. This Act deprives farmers of the protection offered by civil laws and courts. As per Clause 15 of the said Act, farmers cannot approach civil court against the contract violations or deception of the corporate company. However, the state legislative assemblies have the constitutional right to criminalise certain actions of the corporate that hurt farmers and country’s food security. Criminal law, including Indian Penal Code and Code of Criminal Procedure, is an item in the Concurrent List and no Central law forbids a state government from criminalising corporates’ deceptions against farmers. The Central agriculture laws make it virtually impossible to take any legal action against government officials even if the decision of the officials is corrupt or discriminatory. As per Clause 13 of the Act, if the actions are done in good faith, then no legal proceedings can be initiated against government officials, and it is nearly impossible to show that even a corrupt or discriminatory action is done in bad faith. The wide scope of the term “good faith” insulates the government officials from any legal repercussion for their corrupt behaviour. But a sate law can introduce a clause that defines the term “good faith”. The state agriculture law can stipulate that actions that are corrupt, illegal and discriminatory are not actions of “good faith”. Various clauses or conditions that serve the farmers interest can be included in a state law without contradicting the Central law.

Many other regional and state-level parties, who have been part of protests against the Central Acts, have not expressed their readiness to follow the suit of the Congress party. The fact that the Centre acted unconstitutionally to pass a few bills that are designed to hurt farmers does not absolve the state governments of their duty to protect the farmers. As the abuse of power by one constitutional authority can be effectively contained only by another, the constitutional response of the state governments become a test of honesty for all political parties who have been protesting against the Central laws.