Explainer: The Constitutional Validity of Talaq-e-Hasan

If the practice of triple talaq was declared unconstitutional in 2017, why is it being challenged again? 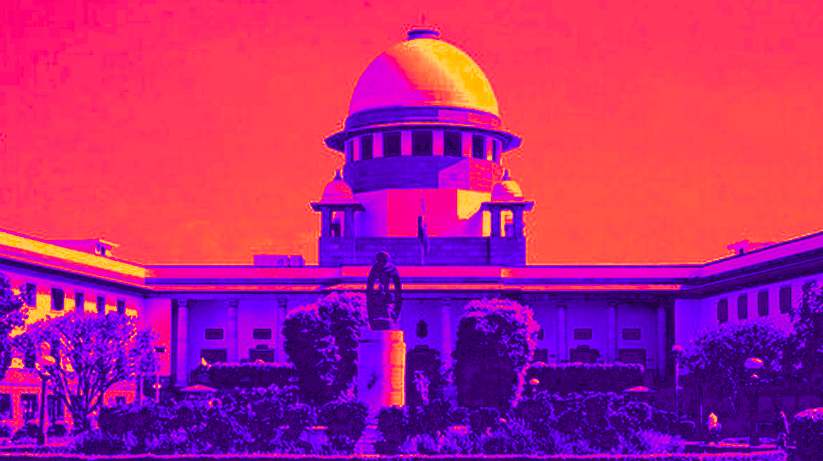 An illustration of the Supreme Court of India. Photo: PTI, Illustration: The Wire

A PIL has been filed in the Supreme Court challenging divorce through Talaq-e-Hasan, a practice by which by a Muslim man can divorce his wife by saying the word “talaq” once a month for three months, reported Bar and Bench.

The petition has been filed by journalist Benazeer Heena. The Public Interest Litigation (PIL) has been filed through Advocate-on-Record Ashwani Kumar Dubey, and seeks a declaration that the practice is unconstitutional as it is arbitrary and violative of Articles 14, 15, 21 and 25 of the constitution.

The petitioner has sought the following reliefs from the apex court:

She states in the petition that the practice is discriminatory since only men can exercise the same, and therefore it is not harmonious with human rights and equality, and is not necessary in the Islamic faith.

This form of divorce allows a man to pronounce divorce on his wife in three turns. It is essential that this form of divorce is pronounced when the wife is not menstruating and there has to be a gap of one month between the three pronouncements. The duration of these three consecutive talaqs is called the period of abstinence. The duration of abstinence or ‘iddat’ is 90 days or three menstrual cycles or three lunar months. If the couple starts cohabitation or intimacy during the period of abstinence, then the divorce is assumed to be revoked. The idea behind introducing this form of talaq was so that the evil of divorce doesn’t become final at once.

If the practice of triple talaq was declared unconstitutional in 2017, why is it being challenged again?

In 2017, the Supreme Court declared Talaq-e-Biddat unconstitutional in the case of Shayara Bano v Union of India. It is the form of divorce where the man pronounces divorce three times in one sitting and the marriage between the two parties comes to an end. This form of divorce was declared unconstitutional in 2017 by a five-judge bench of the Supreme Court with a ratio of 3:2. It was declared unconstitutional on grounds of being arbitrary and against the Quran. The majority held that the practice of was not covered by the Quran and therefore could not be protected under Article 25.

The form of talaq that is under challenge today is Talaq-e-Hasan, which requires the man to pronounce divorce in three turns and there has to be a gap of at least one month between each turn. These are two separate forms and therefore require two separate challenges.

To understand the constitutional validity of Talaq-e-Hasan, we spoke to two Muslim advocates. According to the Advocate-on-Record Supreme Court of India Fidous Wani:

“Divorce was introduced in Islam to give an option to both men and women to end a marriage in case they are not leading happy lives together. Talaq-e-Hasan is the procedure of divorce to be followed by men mentioned in Quran. There is nothing arbitrary about it because women also have the right to take divorce, the process of initiation of divorce at the instance of a woman is called ‘Khula’. Talaq-e-Hasan is an essential religious practice.”

“Quran gives both men and women the right to divorce in case they’re unable to keep their marriage. For men the procedure given by Quran is Talaq-e-Hasan; for women the procedure to give divorce is called khula. Since women in Islam are also given the right to divorce a man in case they are unhappy in marriage, there is no question of talaq practice being unilateral. Talaq-e-Hasan cannot be declared unconstitutional because it is a procedure to seek dissolution in marriage and declaring it unconstitutional will deprive men from their right to seek divorce as per his religion.”

Article 25 of the constitution allows everyone the right to follow their religion without interference. The legislations enacted to regulate personal laws derive their power from this provision. One of those statutes is the Muslim Personal Law (Shariat) Application Act, 1937, one which has been challenged before Supreme Court in the aforesaid Talaq-e-Hasan plea.

If a Muslim woman wants to seek extra-judicial divorce from her husband the same can be done orally or through a legal notice. The right has been recognised under Section 2 of the Muslim Personal Law (Shariat) Act, 1937.

The same has been recently confirmed by a Division Bench of Kerala high court, wherein the court said that the intention of the Dissolution of Muslim Marriages Act was to extend judicial divorce to all Muslim women irrespective of the schools they follow. The court further confirmed that Section 2 of the Shariat Act statutorily recognised the personal law and dissolution of marriages without the intervention of court through ‘talaq,’ ‘illa,’ ‘zihar,’ ‘lian,’ ‘khula’, ‘mubaraat’ etc.

Interestingly, the bench also observed that Muslim women have an unconditional and absolute right to invoke Khula.

“Upon examining the text of the Quran, the writings of Muslim scholars on the subject, case laws on the issue and submissions made by the counsel assisting the Bench, the Court observed that Muslim women have an unconditional right to invoke Khula. The signification of invoking khula is absolute and does not depend upon the consent or assent of the husband,” the judgment read.

Of course, in circumstances where extra judicial divorce is not possible, and the wife needs to seek divorce through judicial means, she has been given that right under Dissolution of Muslim Marriage Act, 1939.

Under these circumstances, isn’t the plea seeking an unconstitutional remedy? Would it not be unconstitutional to deprive only men from practicing extra-judicial divorce? Banning Talaq-e-Hasan will leave only women with the right to practice Khula, which will be unilateral and violative of Article 14, 21 and 25 as it will be discriminatory against men.

The above discussion makes it clear that the Muslim Personal Law (Shariat) application Act, 1937 allows both men and women to practice extra-judicial divorce. It will not just deprive men from practicing extra judicial divorce as per their religion but also women. Therefore, striking down the Act will result in a violation of Article 25.

There was a misconception among Muslims that the enactment of Dissolution of Muslim Marriages Act, 1939 has done away with the extra-judicial form of divorce for women and that after its enactment divorce on the instance of women can only be sought through judicial means.

It is important to note here that the Act was brought with an objective to allow women to take a judicial route to obtain divorce without touching upon their right to practice extra judicial divorce. And the same has been confirmed by the Kerala high court.

“An Act to consolidate and clarify the provisions of Muslim law relating to suits for dissolution of marriage by women married under Muslim law and to remove doubts as to the effect of the renunciation of Islam by a married Muslim woman on her marriage tie,” the Act reads.

Striking down a law that allows women to take a judicial route to obtain divorce will leave many women remedy-less in case they cannot obtain divorce through extra-judicial means.