A three-member committee of high court judges set up to probe two Odisha judges had to halt their inquiry last month when Justice Misra's name cropped up. 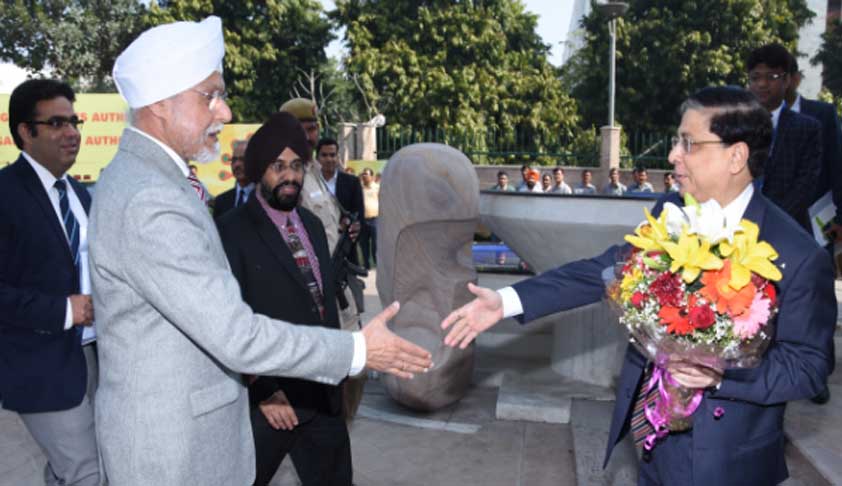 New Delhi: Can the Modi government appoint Dipak Misra as the next chief justice of the country without first resolving long-pending allegations that he acquired public land intended for the landless poor by submitting a false affidavit? This is the question being put to the prime minister and law minister by Adish C. Aggarwala, president of the International Council of Jurists, in the wake of Chief Justice (CJI) J.S. Khehar’s decision to recommend Justice Misra as his successor. Justice Khehar retires on August 27 and Justice Misra is the senior-most puisne judge at the Supreme Court.

Arguing that Justice Misra’s appointment as the next CJI would “severely compromise the independence of the judiciary,” Aggarwala wrote to Justice Khehar on July 24 asking him to first resolve an ongoing enquiry in which Justice Misra’s name had cropped up before the latter takes over the top judicial position.

An Odisha-based activist, Jayanta Kumar Das, had alleged in a letter to then CJI T.S. Thakur in September 2016 that Justice Misra misrepresented facts in attempting to get hold of public land meant to be distributed to the landless poor for agricultural purposes.

According to information furnished by Das, Justice Misra had applied for allotment of the land to develop a fodder farm in 1979. While in his application to the Odisha government he declared that his family owned 10 acres of land although none of it was in his name, he allegedly concealed this information in a subsequent affidavit.

The affidavit later became the basis for allotment of two acres of land to Justice Misra.

The discrepancy between the application and the affidavit was noticed in 1985 by the additional district magistrate of Cuttack, C. Nayak, under whom the matter rested. Nayak ordered the cancellation of the allotment, noting that Justice Misra came from wealthy and propertied family and, therefore, was not eligible to receive the land grant.

Das’s letter to Justice Khehar quoted from the ADM’s order:

“I am satisfied that the lessee has obtained lease by mis-representation and fraud. The tahsildar has committed material irregularity in the procedure for which the public interest has suffered. It is common knowledge that many poor villagers, particularly weaker section of the community have no means of livelihood and the land available in the village should be made available to them to enable them to earn their livelihood and give them a sense of economic security which is the declared policy of the state”.

However, the ADM’s order was taken into consideration only in 2012 after one Chittaranjan Mohanty moved the Odisha high court in 2009 to demand an enquiry into the matter. The high court, while hearing the writ petition, ordered a CBI enquiry, which in 2013 confirmed the alleged irregularities in the land allotments. Following this, the revenue court ordered cancellation of the land allotments.

Despite the CBI’s findings, the case, which is listed before Justice Indrajit Mohanty, has not progressed.

Justice Mohanty is one of two Odisha high court judges against whom an in-house enquiry is being conducted, the other being Justice Sangam Kumar Sahoo.

The enquiry committee comprising three high court judges was set up by former CJI Thakur after he received complaints of corruption and misconduct against the two judges. The committee is  headed by the chief justice of Punjab and Haryana high court, S.J. Vazifdar.

It was reported that during the enquiry, the complainants also presented the allegations against Justice Misra, who is said to be close to the two judges under investigation.

Against this backdrop, Aggarwala wrote to the CJI that the appointment of Justice Misra should be stalled until a probe committee exonerates him of any wrongdoing. Instead of having an enquiry committee comprising high court judges, he demanded for the sake of judicial propriety that an in-house committee that has the power to probe sitting judges in the Supreme Court be constituted to look into the allegations against Justice Misra.

Aggarwala said that Justice Misra has neither challenged the CBI report nor has he appealed against the revenue court orders that cancelled the allotment of land to him. He added that since the land allotted to him was taken back by the government only after he was appointed as a judge in the Supreme Court, the collegium and the government of India may not have taken the allegations against Justice Misra into consideration, and that it may now be proper for the CJI to constitute an in-house enquiry committee to probe the matter further before he takes over as the next chief justice.

Aggarwala said that since the Indian judiciary is highly respected across the world, “especially in the matters of jurisprudence found in the judgments of Supreme Court of India and different high courts in India”, it should first make the effort to clear the air around allegations of misconduct against Justice Misra before recommending him as the CJI.

However, the CJI appears to have ignored Aggarwala’s letter – which was written on 24 July – as Justice Khehar, according to reports, has already recommended Justice Misra’s name to the law ministry for appointment as the next CJI.

Aggarwala is, therefore, planning to appeal to the government to ask whether the CJI has referred to the allegations against Justice Misra before recommending his name.

“The chief justice of the high court Punjab and Haryana had informed Justice Khehar about the allegations against Justice Misra on June 15, but the CJI has not responded. Therefore, we are planning to write to the president and the prime minister and request them to look into the letter that the CJ of Punjab and Haryana has written. The government can’t inquire into allegations against a sitting judge of SC. This can only done by the in-house committee. We will request the government to ask the CJI whether he had considered the allegations and formed an in-house committee to probe the matter,” Aggarwala told The Wire.

“In the meantime, the government has the power to appoint an acting chief justice under article 126 of the constitution of India until the matter is fully resolved,” he added.

Noted lawyer and political activist Prashant Bhushan told The Wire that it may be too late for any action now. “The charge against Justice Misra is serious. However, in view of the fact that it is quite old and now that he is due to become the CJI very soon, it would be difficult to do anything about it,” he said.

It may be noted that a retired Odisha high court judge, B.P. Das, last year, had alleged that his candidacy for the Punjab and Haryana chief justice’s position was scuttled by Justice Misra because he had ordered a CBI probe into the alleged land fraud case in which Justice Misra was also implicated.

Though The Wire was unable to contact Justice Misra for a response to Aggarwala’s letter and the older controversy it refers to, Justice Misra’s associates had last December dismissed Das’s allegations as “baseless” in remarks to the Economic Times. As for the charge that a false affidavit had been submitted by him to obtain land intended for the poor, the newspaper quoted “people close to Justice Misra” as saying that “the land was taken in 1979, when he was a young advocate, and he surrendered it in 1985, for which records can be verified. These are all baseless allegations.”

Justice Das disagreed, telling the Economic Times: “The CBI report also said the land record was not corrected till 2012. Technically speaking, Justice Dipak Misra, among others, from 1979 to 2012, were in possession of this land… There were about 300 allottees. This was a case of encroachment/illegal allotment to individuals, who misrepresented facts and claimed to be landless.”

Justice Misra is not new to controversy. His name emerged in the 60-page suicide letter by the former chief minister of Arunachal Pradesh, Kalikho Pul, earlier this year. Pul had alleged that relatives of top Supreme Court judges had approached him with offers to swing the president’s rule case in his favour.

Justice Misra was the senior judge on the bench that last November ruled in favour of a petition that the national anthem be played before the screening of all movies in cinema halls and that audience goers had to stand to attention for it. In another controversial decision last year, a bench comprising Justice Misra had rejected the Uttar Pradesh government’s decision to provide reservation in promotion of government employees. He also led the bench which upheld the law of criminal defamation.

If confirmed as CJI, Justice Misra’s tenure will last till October 2018.