In Dismissing Bribery Probe, SC Equates Request for Recusal of Judges With Contempt of Court

The fact that the charge of attempted bribery was made by the CBI has been conveniently overlooked in the rush to declare that the petitioners had damaged "the great institution".

New Delhi: A request for recusal of a judge is either accepted or refused, with reasons. The Supreme Court, on Tuesday, set the bar on those who seek recusal of judges very high – by making it appear as though they should be prepared to face proceedings for contempt of court as well.

This ‘chilling effect’ on seeking recusal was apparent in the judgment delivered by a three-judge bench which dismissed the writ petition filed by advocate Kamini Jaiswal – who sought an independent probe into an alleged attempt to bribe judges to settle a case before the court.

The case was heard by Justices R.K. Agrawal, Arun Mishra, and A.M. Khanwilkar on Monday afternoon. The judges took less than 24 hours to deliver their verdict, which runs to 38 pages. Authored by Justice Mishra, the judgment is a classic instance of how the judiciary cannot just stonewall criticism but also put its critics in the firing line.

Although the bench found Jaiswal’s petition and averments contemptuous, it refrained from initiating proceedings against her and her counsel. The bench orally observed that it was doing so in order to work together for “this great institution”.

Ironically, Monday’s proceedings were not on the merits of Jaiswal’s petition, as both the bench and the arguing counsel ended up debating the so-called issue of propriety of filing two identical writ petitions on the issue – and the extent of guilt of the petitioners in this aberration.

Thus the “tearing hurry” in filing the second writ petition by Kamini Jaiswal, and seeking its hearing in court No.2 on November 9, which set off the current crisis was repeatedly questioned by the bench. Prashant Bhushan answered this by admitting that they did so because they genuinely believed that Chief Justice Dipak Misra’s administrative decision of listing the first writ petition before court No.6 rather than court No.2 was improper, especially because of their plea that he ought to recuse himself both judicially and administratively in the matter. In support of their contention, he pointed out that the Central Bureau of Investigation’s FIR filed on September 19 cast a shadow on the judges who heard the original medical college matter, although it did not name any judges. Justice Arun Mishra, however, equated the “shadow of doubt on the judges” with a contemptuous imputation on the part of the petitioners.

In his response, Bhushan questioned the “tearing hurry” on the part of the five-judge constitution bench which assembled at short notice on November 10 to annul court No. 2’s decision referring the matter to a constitution bench of the court’s five senior-most  judges.

Justice Arun Mishra’s judgment has a curious explanation for this “tearing hurry” on the part of the bench. When two coordinate benches of the court give two conflicting decisions about a related issue, it is generally referred to the chief justice, for constituting a larger bench to resolve the difference.

So, what was the difference in the decisions of the two coordinate benches, which the constitution bench had to resolve on November 10?

On November 9, the bench of Justices J. Chelameswar and S. Abdul Nazeer, found it appropriate that Kamini Jaiswal’s petition be heard by the first five judges of the Supreme Court in terms of seniority, in view of the disturbing allegations in the FIR, which pertain to the court.

On the forenoon of November 10, Justices A.K. Sikri and Ashok Bhushan in court no. 6 heard the first petition filed by the Campaign for Judicial Accountability and Reforms on the same matter, which was directed to be listed before them on November 8 by the chief justice, after being mentioned before court No.2.

The Sikri-Bhushan bench agreed that the allegations in the FIR were serious, but expressed its anguish that Jaiswal’s petition, which was similar to CJAR’s earlier one, was not tagged with it. The fact that court No.2 directed its hearing by a constitution bench of the first five judges on November 9 was also seen as a sign that the petitioners and court No.2 had no trust in court No. 6. After expressing its pain, however, the bench took note of the constitution bench hearing on the second petition, scheduled on November 13, and said: “Let the matter be placed before the chief justice for passing appropriate orders for listing this matter.”

It is these two orders that the chief justice found conflicting with one another. A bare reading of Sikri-Bhushan bench’s order, however, would suggest that it would not be averse to tagging the CJAR petition along with Kamini Jaiswal’s so that both could be heard by the constitution bench which was scheduled to meet on November 13. It only wanted the administrative decision of listing it before that bench to be taken by the chief justice.

As Justice Arun Mishra’s judgment on Tuesday reveals, it is this non-existent disagreement between the two coordinate benches which became the basis for convening the constitution bench at a short notice. November 10 was the last working day before the scheduled constitution bench’s hearing on November 13. 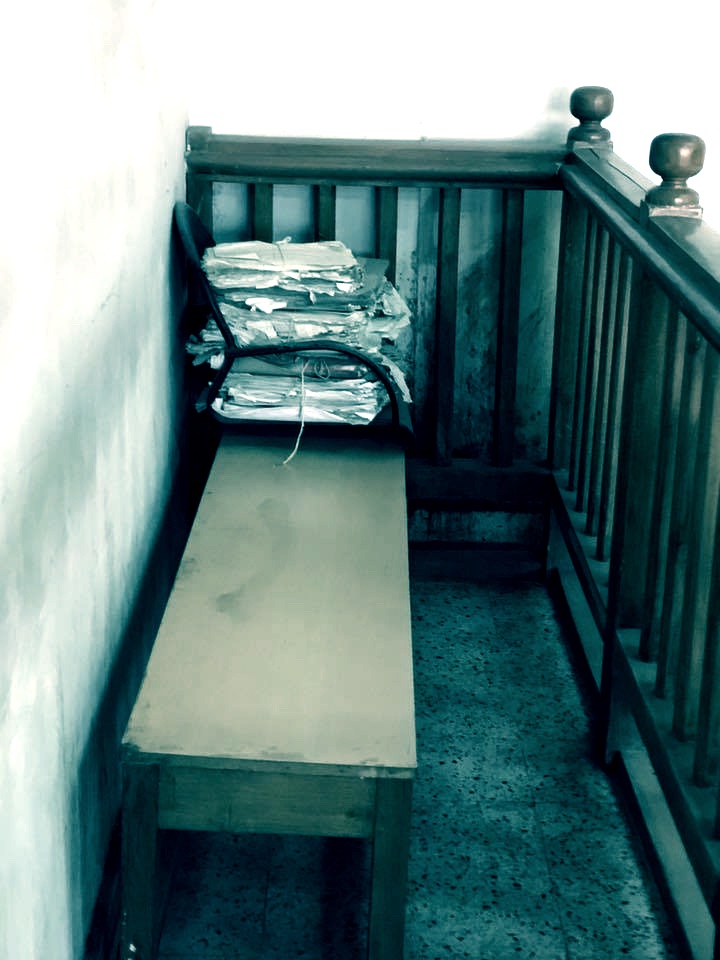 Files on a bench, awaiting their day. Credit: Tunku Varadarajan

In his analysis for The Wire, former law minister Shanti Bhushan has argued that a judicial order cannot be violated, and it could not have been rendered ineffective by the constitution bench decision of  November 10.

Ironically, Justice Arun Mishra’s judgment on Tuesday attempts to answer this submission by relying on the November 10 decision of the “short-notice” constitution bench, which said that the competence of the chief justice to constitute a bench has been decided, and that no other order constituting a particular bench can be passed; that would include the order dated November 9, passed by Justices Chelameswar and Nazeer in Court No.2. “It cannot hold the field in view of the decision of the constitution bench of this court, which expounds that the CJI has the prerogative to constitute a bench, notwithstanding any judicial order passed to the contrary”, Justice Mishra wrote in his judgment.

Although Shanti Bhushan had assailed the very basis of the November 10 judgment of the constitution bench, Justice Mishra relied on the outcome of the same judgment to answer the criticism against it.

“As a matter of fact, there is no question of applicability of Article 144 or 142 in this case. In case they are attracted, it is the decision of the constitution bench that is binding on all concerned, as the precise question has been dealt with by the constitution bench of this court in the aforesaid case of CJAR”, Justice Mishra wrote in his judgment.

The Agrawal-Misra-Khanwilkar bench, relying on Dr. D.C. Saxena v Chief Justice of India (1996), held that when imputations were made against the chief justice, it is his prerogative to constitute the benches and assign judicial business, and this would not hinge on the whim of the litigant.

The bench held  – again relying on Dr. D.C.Saxena – that it was the duty of the chief justice to assign judicial work to other judges. By doing so, he did not become a judge in his own cause, it was held. “It is contempt to imply that the chief justice would assign it to a bench which would not pass an order adverse to him”, the court had held in Dr. D.C.Saxena.

A previous decision of the court has a precedent value only if the factual matrix of that case is broadly similar to the current one to be decided by the court. However, the factual matrix of Dr. D.C.Saxena was completely different from the current petitions before the court. In D.C. Saxena, the petitioner made wild allegations against the then chief justice, A.H. Ahmadi, in his second writ petition, after losing his first one, filed against the then Congress president, P.V. Narasimha Rao, for allegedly avoiding to pay his dues to the exchequer. The petitioner in that case had imputed that Chief Justice Ahmadi had allowed Rao to avoid payment of dues treating him as a class by himself, and that the CJI should not be allowed to take judicial immunity, and was liable to criminal prosecution.

In the CJAR  case on Monday, Prashant Bhushan made it clear to the court that he was not making any allegations against the chief justice; on the contrary, he only sought to protect him from the shadow of doubt by seeking his recusal from the case.

The bench on Tuesday, however, twisted his argument to imply that he presupposed the investigation involved the chief justice and the other judges who heard the case – that the accused allegedly sought to influence them.

“It is far-fetched and too tenuous to even assume or allege that the matter was pending in this court for which any bribe was to be delivered by anyone”, the bench observed on Tuesday. The fact, however, is that it was the CBI which made this implicit assumption in the FIR, which it filed on September 19, and therefore, it is for the CBI or any other probe agency to disprove this assumption.

Recusal of a judge cannot be asked on the ground of conflict of interest, the bench held, and rejected the oral prayer of the petitioner, for recusal of Justice Khanwilkar, who had heard the medical college case along with the CJI and another judge.

“Filing of such a petition and the zest with which it is pursued has brought the entire system in the last few days to unrest. An effort was made to create ripples in this court; serious and unwanted shadow of doubt has been created for no good reason whatsoever by way of filing the petition which was wholly scandalous and ought not to have been filed in such a method and manner”, the bench held.

Clearly, the judgment offers lessons on how to turn the tables on one’s critics.