Did India Just Sound the Death Knell of the International Criminal Court?

Justice will not seen to have been done unless criminal law is equally enforced on all violators through a genuinely independent adjudication process. Both core conditions are lacking with the ICC. 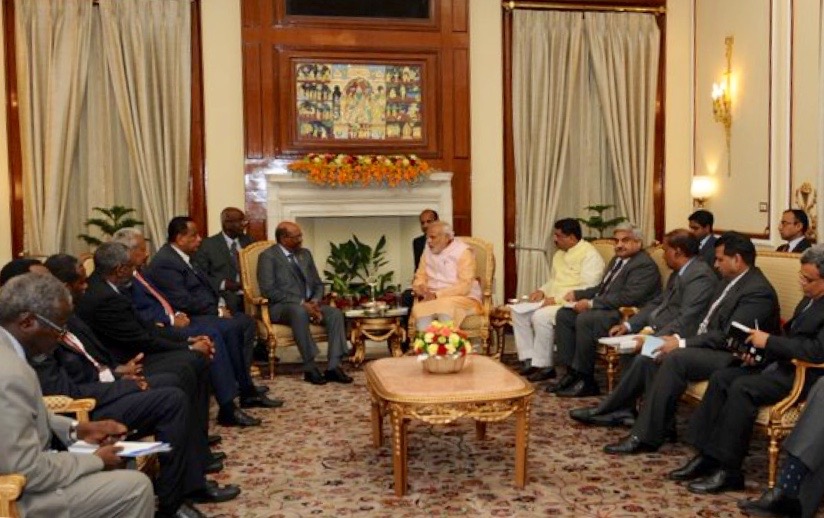 Sudan’s President Bashir is handed over his invitation to attend the India-Africa Forum Summit in New Delhi by Minister of State for External Affairs V.K. Singh in Khartoum. Credit: MEA

Local commentary on the third India–Africa Forum summit held in New Delhi on 26–29 October has focussed on India’s expanding strategic footprint in Africa. Globally, however, the most consequential impact of the summit may be felt in a key plank of the normative architecture of world order. One of the guests who was welcomed in Delhi – Sudan’s President Omar Hassan al-Bashir – is under indictment from the International Criminal Court (ICC), whose viability must now be under serious question.

Superficially, his presence signified India’s disrespect for the rule of law. In reality, it marks a growing rebellion against a normative enterprise of international criminal justice being subverted into a political project by the previously powerful West to maintain control over the rest. The de facto impunity of Western leaders and generals for possible international criminal conduct becomes increasingly unsustainable in a shifting global power balance. Either we will have universal justice or the ICC enterprise will collapse.

The 123-member ICC, in operation since 2002, has issued nine indictments, all against Africans. In March 2012, Congolese warlord Thomas Lubanga became the first person to be convicted by the ICC of war crimes for having conscripted, enlisted, trained and used children under 15 in armed hostilities. In April 2012, Charles Taylor, Liberia’s president-cum-warlord from 1989–2003, was found guilty on 11 charges of aiding and abetting several war crimes in Sierra Leone: the first head of state to be convicted by an international court since Nuremberg. Western governments and Western-based NGOs reacted positively to the march of international criminal justice. Victims of the violence rejoiced and celebrated. But ICC critics pointed to double standards, the remoteness of The Hague politically as well as geographically from the scene of the alleged atrocities, and the failure of international accountability mechanisms against Westerners.

In 2009, President Bashir became the first sitting head of state against whom the court issued arrest warrants for war crimes and crimes against humanity. Many feared this would jeopardise prospects for peace. Formal requests by the African Union not to indict the president were ignored by the ICC and the UN Security Council, which has powers of referral and deferral. This has generated growing anger and defiance by African governments. After the ICC issued arrest warrants for President Uhuru Kenyatta and his deputy William Ruto on charges of instigating violence following Kenya’s disputed 2007 election, in December 2010 MPs attacked the ICC as a colonial, anti-African court and urged Kenya’s withdrawal. The ICC charges against Kenyatta, strongly criticised by the AU in 2013, were formally withdrawn last year.

An ICC indictee is required to be arrested and extradited if he should travel abroad. Bashir has been to several countries, most recently to South Africa, whose government defied its own courts in permitting him to leave peacefully after an AU conference in June. Over 100 international and African NGOs expressed ‘deep disappointment’ with Pretoria. Unlike South Africa, India is not an ICC party. When Bashir accepted India’s invitation, the office of ICC Prosecutor Fatou Bensouda (an eminent African criminal lawyer) pointed to Security Council Resolution 1593 (2005) calling on all states – including those that have not joined the court – to cooperate fully with the ICC. ‘By arresting and surrendering ICC suspects’, the statement added, ‘India can contribute to the important goal of ending impunity for the world’s worst crimes’. Amnesty International and Human Rights Watch were among 21 NGOs calling on India to arrest Bashir.

Recalling that Prime Minister Narendra Modi himself was under a 12-year travel ban to most Western countries at the urging of human rights activists, one wonders about his private reactions to their demand to arrest Bashir. One hint perhaps: Bashir held bilateral talks with Modi on the sidelines of the summit and the PMO tweeted the group photo of the meeting:

India’s official position was that Resolution 1593 is not binding on ICC non-signatories. India was happy to comply with its ‘statutory international legal obligations’ but not necessarily other directives. The Dean of African ambassadors in New Delhi, Ethiopia’s Gennet Zewide, said South Africa’s actions in June had been correct and the ICC could not decide on matters of sovereignty. South African deputy minister Obed Bapela said the ICC had ‘lost its direction’ and the ruling African National Congress intended to withdraw from it.

Sharp criticism by human rights activists of South Africa’s and India’s non-cooperation with the ICC for damaging the world’s only criminal court is misdirected and fundamentally flawed. Grave harm is inflicted by the de facto impunity of those who have been the biggest warmongers. In 2012 Nobel Peace Laureate Desmond Tutu refused to share the stage with former British Prime Minister Tony Blair and pulled out of a scheduled international event in Johannesburg. Those responsible for the suffering and loss of life caused by the 2003 invasion of Iraq, he explained, ‘should be treading the same path as some of their African and Asian peers who have been made to answer for their actions in the Hague’.

Equal enforcement for all

The United States, Britain and Israel have been among the countries most heavily involved in war and armed conflict in the UN’s 70-year history. Don’t expect to see any of their political or military leaders in an international criminal dock anytime soon. The ad hoc International Criminal Tribunal for former Yugoslavia tried several Serbs, but no NATO national. Might it have something to do with the tribunal having been located in a NATO country, its budget paid mostly by NATO countries and its reliance on NATO for collection of evidence and enforcement of warrants?

‘There are people who have the power to use international justice or international law to judge others and it does not apply to them,’ Rwanda’s President Paul Kagame said in 2013. India cannot take part in the five-yearly review conferences of the Nuclear Non-proliferation Treaty because it has not signed the NPT. The US has no voice in shaping the evolution of the UN Convention of the Law of the Seas because it is not a signatory, as Beijing points out every time it is lectured by Washington to utilise UNCLOS for resolving its maritime territorial disputes. But, in a travesty of natural justice, countries that refuse to subject their own conduct to ICC jurisdiction – China, Russia and the US (and India whenever it is occupies a seat) – can vote in the Security Council on referring or deferring cases involving other countries to the court.

Justice will not seen to have been done unless criminal law is equally enforced on all violators through a genuinely independent adjudication process. Both core conditions are lacking with the ICC. The military commanders and political leaders of major powers are still shielded from international criminal justice. An initiative meant to protect vulnerable people from brutal national rulers has been subverted into an instrument of power against vulnerable countries.

The ICC never investigated Western forces’ behaviour in Afghanistan nor the US policy of large-scale drone killings. Palestine has sought an ICC investigation of Israel’s conduct as an occupying power. If the ICC declines, its credibility will be in tatters. If the court indicts Israeli generals and prime ministers, Israel’s powerful Western backers will destroy it. The ICC should be mothballed until it is robust and resilient enough to be truly universal.