The government told the top court, which is hearing a batch of petitions against the note ban, that all necessary steps were taken to minimise hardships caused by the exercise. 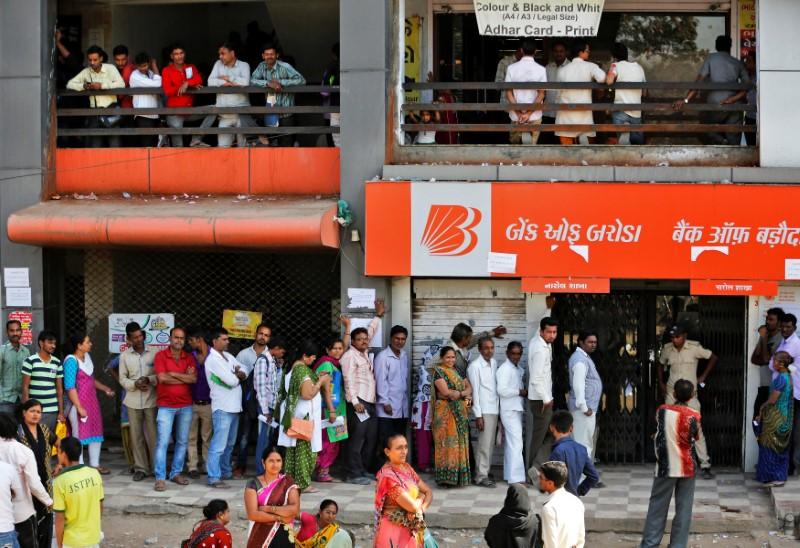 People queue to deposit or withdraw cash outside a bank on the outskirts of Ahmedabad, India, November 29, 2016. Credit: Reuters/Amit Dave/Files

New Delhi: In its latest affidavit filed before the Supreme Court on demonetisation, the Union government has said that one of the primary reasons that influenced the 2016 decision was the massive increase in the circulation of Rs 500 and Rs 1,000 currency notes at that time, according to Times of India.

The reason cited above is the latest instance of government attempts to retrofit the rationale behind the move that the Opposition has described as “economic genocide”,  “criminal act” and an “organised loot”.

The government on Wednesday, in its affidavit, also repeated the other reasons to carry out the decision that had far-reaching implications: combat the menace of fake money, terror financing, black money and tax evasion.

The submissions were made in an affidavit filed in response to a batch of pleas challenging the government’s 2016 demonetisation decision. A five-judge constitution bench comprising Justices S.A. Nazeer, B.R. Gavai, A.S. Bopanna, V. Ramasubramanian, and B. V. Nagarathna is hearing the issue and is slated to take up the matter on November 24.

On the cited reason for the massive increase in the circulation of high-value denominations, the government said. “There was a massive increase in the circulation of banknotes of Rs 500 and Rs 1,000 vis-à-vis Rs 50 and Rs 100 in the preceding five years as per the government data. This showed a steep rise in the two highest denominations, that is 76.4% for Rs 500 and 109% for Rs 1,000 from 2010-11 to 2015-16,” the affidavit says, accoridng to TOI. 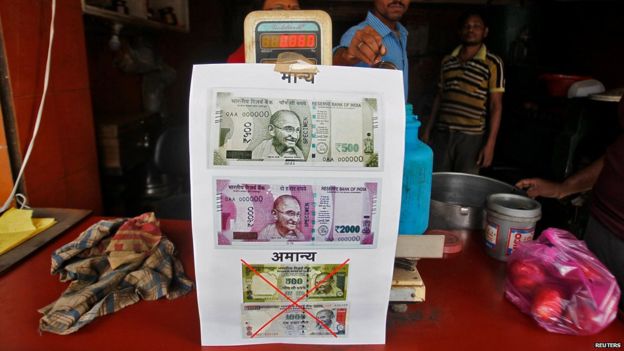 A poster at a store. Credit: Reuters

The Union government, in its affidavit, stressed that formalisation of economy was another reason to carry out the exercise.

“Withdrawal of legal tender character was one of the significant steps in the enhanced formalisation of the economy with the aim of expanding opportunities for the millions living on the periphery of the economy,” the government added.

The government told the top court that the step was taken after extensive consultation with the Reserve Bank of India (RBI) and advance preparations were made before the note ban was enforced.

“The withdrawal of the legal tender character of the specified bank notes was by itself an effective measure and was also a part of a larger strategy for combating the menace of fake money, terror financing, black money and tax evasion, but not confined to them alone.

It was an economic policy decision exercised in accordance with powers conferred by an Act of the Parliament (RBI Act, 1934), in conformity with the provisions of the said Act and was subsequently affirmatively taken note of by the Parliament in the Specified Bank Notes (Cessation of Liabilities) Act, 2017,” the government submitted.

The withdrawal of the legal tender character of the specified bank notes was one of the critical steps in the series of transformational economic policy steps, it said.

The Union government submitted the decision of demonetisation was executed on the specific recommendation of the Central Board of the Reserve Bank of India, and the RBI had also proposed a draft scheme for the implementation of the recommendation.

“The Central Board of the RBI made a specific recommendation to the Central government for the withdrawal of legal tender character of the existing series of Rs 500 and Rs 1000 banknotes.

“The RBI also proposed a draft scheme for the implementation of the recommendation. The recommendation and the draft scheme were duly considered by the Central Government and, based on that, the Notification was published in the Gazette of India declaring that the specified bank notes shall cease to be legal tender,” it said.

‘All efforts taken to minimise hardships’

Contending that wide-ranging measures were taken to minimise and mitigate the hardships faced by the people, the government said that it exempted specified bank notes from ceasing to be legal tender for certain transactions such as booking bus, train and air tickets, treatment at government hospitals, purchase of LPG cylinders, etc.

“Rooting out the menace of fake currency, black money and financing of subversive activities, expansion of the formal sector, digitalisation of transactions, expanding communication connectivity to enable last mile reach, broadening the tax base, enhancing tax compliance… were high on the economic policy agenda of the government,” the government said.

It also mentioned lowering the cost of business, facilitating financial inclusion, and removal of long-term perennial distortions on the informal sector side.

On November 9, attorney general R. Venkataramani apologised to the bench for not being able to prepare the comprehensive affidavit and sought a week.

Justice Nagarathna had observed that normally the constitution bench does not rise like this and it was very embarrassing.

The top court granted one week to the government to file an affidavit.

The bench was hearing a batch of 58 petitions challenging the government’s November 8, 2016 decision to demonetise the Rs 1000 and Rs 500 denomination currency notes.

On December 16, 2016, a bench headed by then Chief Justice T.S. Thakur referred the question of the validity of the decision and other related matters to a larger bench of five judges for an authoritative pronouncement.

Six years on, jury is still out on the efficacy of demonetisation

The jury is still out on the decision to demonetise high-value currency notes on November 8, 2016, with the government claiming it has helped greater formalisation of the economy while critics saying it has failed to curb black money and reduce dependence on cash. 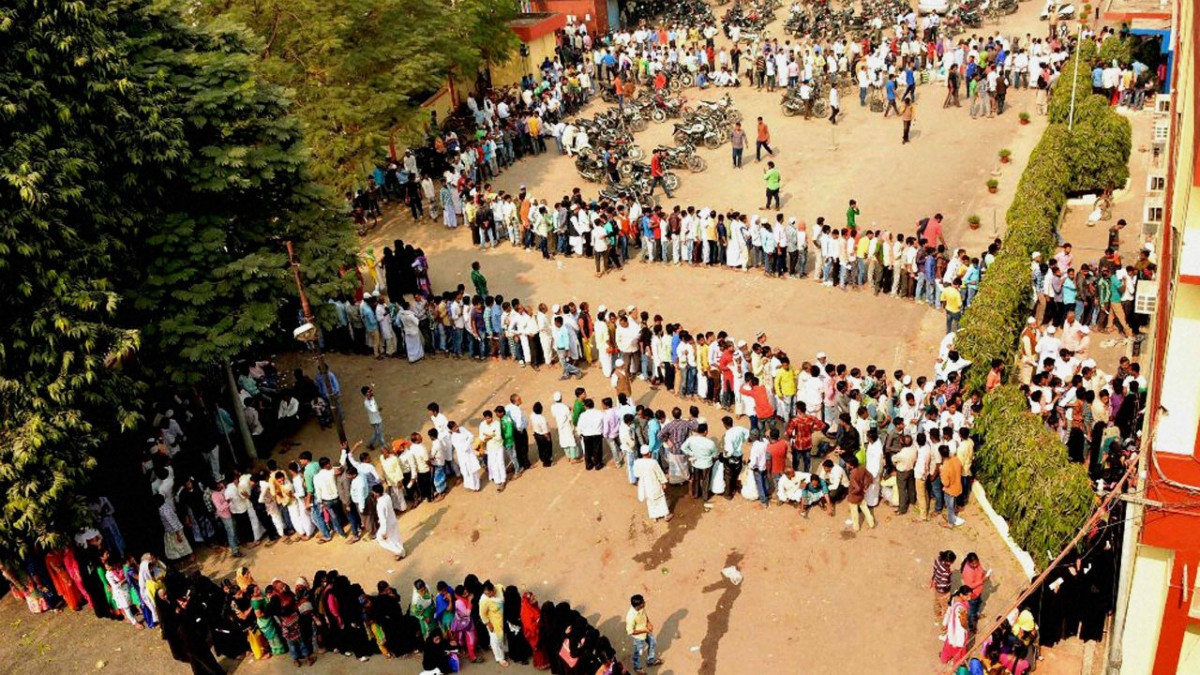 The failure of demonetisation is what seems to have prompted the government to block all information about it. Credit: PTI

As per the data of the Reserve Bank of India, currency with the public has jumped to a new high of Rs 30.88 lakh crore on October 21, indicating that cash usage is still substantial even six years after the demonetisation move. At Rs 30.88 lakh crore, the currency with the public is 71.84% higher than the level for the fortnight that ended November 4, 2016.

On November 8, to mark the six years of demonetisation, Congress president Mallikarjun Kharge in a tweet had recalled that demonetisation was promised to free the country of black money.

Taking to Twitter, he had said, “But it destroyed businesses and ruined jobs. 6 years after the ‘masterstroke’ the cash available in public is 72% higher than that in 2016. PM is yet to acknowledge this epic failure that led to fall of economy.”

According to Jayati Ghosh, Professor of Economics at the University of Massachusetts Amherst, US, none of the stated objectives have been achieved.

“It is not surprising because the logic behind the move (cash is the cause of black money), the design of the move (without recognising the crucial role of cash in the informal economy that sustains around 85% of the population) and the implementation (sudden and extreme without knowledge of and preparation by the public agencies and banks) were all completely flawed,” she had said.

The fact that more than 99% of the currency that was invalidated through demonetisation came back into the banking system, as per the RBI data, also goes against the stated objective of the government that the move was aimed at weeding out black money. Of the notes worth Rs 15.41 lakh crore that were invalidated, notes worth Rs 15.31 lakh crore returned, the RBI data said.

“Whether Rs 15-plus trillion of CIC (currency in circulation) was not hoarded as black money or the hoarders took advantage of legal and administrative loopholes in the demonetisation implementation mechanism to change the colour of money from black to white, the fact was that the entire demonetised currency came back to RBI. Nothing became worthless pieces of paper,” according to former finance secretary Subash Chandra Garg.