The court observed that Delhi was reporting more daily cases than states like Maharashtra and Kerala and asked the government what concrete steps were taken to contain the spread of infection.

New Delhi: The Delhi high court on Wednesday pulled up the Aam Aadmi Party government for relaxing norms for public movement and gatherings in the national capital even as COVID-19 cases were increasing and questioned whether it has any policy or strategy in place to deal with the “alarming” situation.

A bench of Justices Hima Kohli and Subramanium Prasad said that when Delhi, as city-state, was “hands down beating” Maharashtra and Kerala in the number of daily new cases in the past two weeks, what concrete steps were taken by the government to contain the spread of infection.

The court noted that the daily number of new COVID-19 cases received for November 10 was at 8,593 and “still counting” and the number of containment zones in the city were 4,016.

The court further noted that as per the latest sero survey report of the government the antibodies presence was detected in 25% of the persons tested which meant that one in four persons has been infected by COVID-19.

“No household has been left untouched,” the bench said, referring to the survey data and questioned as to why the Delhi government was relaxing norms in such a situation when other similarly placed states were bringing in restrictions.

The court questioned the rationale behind allowing 200 people to attend public functions instead of reducing the number and permitting public transportation to be fully occupied, saying that these steps could lead to “superspreader” events.

The court also sought to know as to why the Delhi government, represented by additional standing counsel Satyakam, has not come out with any legislation to ensure strict adherence to wearing of masks which was being termed as a “vaccine” till the actual vaccine comes.

It directed the Delhi government to file a status report explaining steps taken by it in the last two weeks, when the COVID-19 cases have risen alarmingly, to contain the spread of the infection and listed the matter for further hearing on November 19. 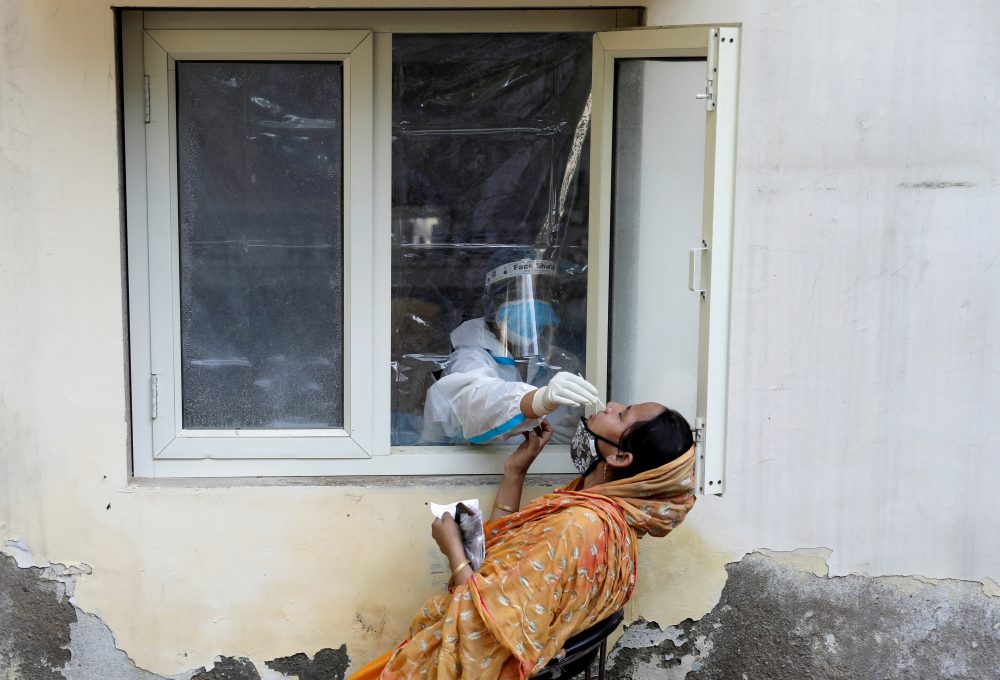 A health worker collects a sample using a swab to conduct tests for COVID-19 in New Delhi. Photo: REUTERS/Adnan Abidi/File

According to Hindustan Times, the court said the infection rates in the city are “mind-boggling”. “What’s with the Delhi government allowing all the un-lockdown when the cases are skyrocketing? Why have you opened everything? What are the strategies that you are following?” the bench asked.

“You (Delhi) have seen the heights which no other state in the country has seen. When the numbers are decreasing in all the states, then why numbers are rising only in your state? Either there is no control or there is lack of control,” the bench said.

Also Read: One in Eight of Delhi’s Recent COVID Cases Can Be Linked To Air Pollution: IMA

The court observed that the petitioner in the case, advocate Rakesh Malhotra, was also infected and had to run from “pillar to post” to arrange a bed near his house and later “had to settle for a friend’s nursing home in Dwarka after his oxygen level dipped due to the virus”

“People are running helter-skelter without knowing what to do. There are children, elderly people at everyone’s house and there is no household left in Delhi, which hasn’t been touched by the virus. When other states are locking up, either partial or weekend lockdowns, Delhi government has decided to throw its wings open and has allowed all the gatherings,” the court said, according to HT.

“When we speak, we do it for all the citizens of the city. From our personal experiences and those of our colleagues, we are left to wonder whether there is any policy by the Delhi government that is being followed. We do not live in ivory towers and even we receive several requests from the citizens who are struggling. It’s a struggle, a real struggle,” the bench observed.