The court has also summoned Jairam Ramesh, Pawan Khera and Netta D'Souza. Ramesh has said he will disprove the 'spin' given to the matter by Irani. 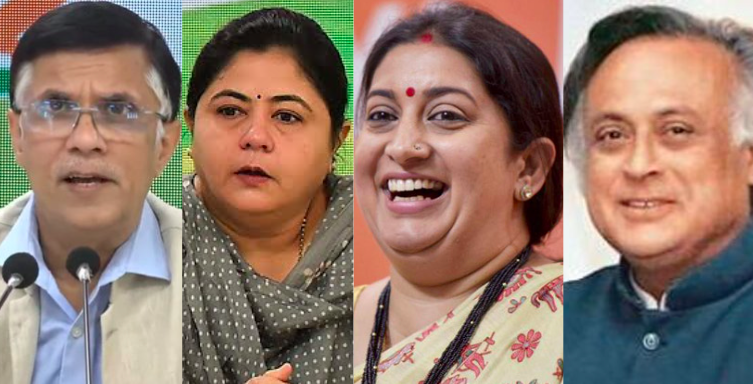 New Delhi: The Delhi high court on July 29 ordered three Congress leaders to remove material on social media that allegedly defames Union minister Smriti Irani and her daughter in the controversy over a bar owned by the latter in Goa.

Bar and Bench has reported that the court, hearing a defamation suit filed by Irani, has also summoned Jairam Ramesh, Pawan Khera and Netta D’Souza.

Ramesh has responded on Twitter, noting that he and the others will “challenge and disprove the spin being put out by” Irani. His tweet below has been retweeted by Pawan Khera and Netta D’Souza.

The Delhi High Court has issued notice asking us to formally reply to the case filed by Smriti Irani. We look forward to presenting the facts before the court. We will challenge and disprove the spin being put out by Ms. Irani.

“Plaintiff has made out prima facie case and balance of convenience lies in favour of the plaintiff and against the defendants,” the court said, according to Bar and Bench.

Also watch | Is a Legal Battle Brewing in Row Between Cong and Smriti Irani Over Daughter’s Goa Eatery?

“They are also directed to remove the post, videos, tweets, retweets, morphed pictures of plaintiff and her daughter along with the allegations and stop their recirculation,” the order said, according to Bar and Bench.

If the posts are not removed within 24 hours of the order, the court has directed the social media platforms to take down the material, the report said.

The Congress leaders had alleged that Irani’s 18-year-old daughter ran a bar illegally in Goa and targeted the minister over this, demanding that Prime Minister Narendra Modi sack her from his Cabinet.

Congress spokesperson Pawan Khera, its general secretary Jairam Ramesh and the party’s Goa chief Amit Patkar made the allegations at press conferences in Delhi and Panaji, targeting Irani and her family.

The opposition party also shared a copy of the purported show cause notice given to the bar and alleged that the excise official who gave the notice is reportedly being transferred after pressure from authorities.

The Wire has reported earlier that on July 21, Goa’s excise commissioner, Narayan M. Gad, issued a show cause notice to Silly Souls Cafe and Bar run by Irani’s daughter based on a complaint filed by lawyer Aires Rodrigues, who said that “fraudulent and fabricated documents were produced” to acquire the liquor licence.

“The licence was renewed last month, despite the licence holder having passed away on 17/05/2021,” the show cause notice said.

The “Silly Souls Café and Bar” at Assagao allegedly being run by Smriti Irani’s family was illegally built without obtaining any construction licence. This has been revealed to Adv. Aires Rodrigues today under the RTI Act by the Assagao Panchayat.https://t.co/GCezEdgZYx

Irani has alleged that the allegation was levelled not only to “assassinate” and “publicly mutilate” her daughter’s character but to politically malign her also and dared the opposition party to show proof of any wrongdoing,

She has claimed that her daughter does not run any bar.